British Airways (BA) passengers have expressed confusion and concern following a decision by the airline to suspend flights to Egypt’s capital, Cairo, for seven days over unspecified security worries. 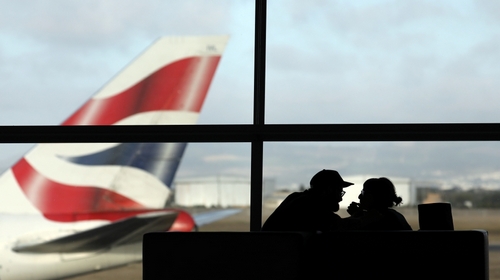 Passengers have scrambled to find alternative flights since receiving a notification from the airline on Saturday night informing them about the decision which came into effect immediately.

In a statement, the airline said the move was “a precaution to allow for further assessment”, without offering further details.

Following BA’s announcement, Lufthansa, which operates flights from Cairo to Munich and Frankfurt, said it was also suspending flights until Sunday, citing “an unclear security situation”.

The German carrier confirmed to Al Jazeera that flights would resume on Sunday, with a company spokesperson saying the first flight would leave Frankfurt in the evening.

Speaking to Al Jazeera, travellers said they were left scrambling to rebook flights after they received the notification they described as “unsettling”.

Najah, an Egyptian academic who was booked on a BA flight to London on Tuesday, told Al Jazeera she was still trying to rebook an alternative flight to get to Spain in time for a summer course she will be teaching.

“BA said to rebook through the agency we initially booked with, but I have not received any response from them since last night,” said Najah, adding she was now unsure whether it was safe to fly out of Cairo.

“It is a little irresponsible of BA not to tell people what is going on. If there are security concerns, people shouldn’t be travelling at all or are they BA trying to shirk away from any responsibility?”

Youssef Chouhoud, an assistant professor at Christopher Newport University who was travelling from Stockholm to Cairo on Sunday, said he was initially rebooked on a long detour before calling the airline a second time on Sunday morning.

“But this morning, I was able to switch that flight to through Copenhagen,” he told Al Jazeera.

Speaking about his sister, who was travelling with her two young children from London to Cairo on Saturday night, Ahmed said the decision caused his family a lot of distress.

“After checking in, BA told her that flights had been suspended. They offered her to either take another BA flight in nine days or use Aegean airlines, with a four-hour layover in Athens.

“She had to spend the night at Heathrow to take the flight to Athens this morning,” Ahmed said on Sunday.

Duncan Hart, a British tourist who had been in Cairo to watch the African Cup of Nations, posted a video on Twitter on Sunday expressing his confusion over the decision.

“I’m a bit confused because if there still are serious security concerns, why would they allow me to fly from the same airport merely an hour later,” said Hart, adding BA rebooked his flight to London on Egypt Air.

While passengers decried the lack of information, aviation expert Alex Macheras told Al Jazeera that airlines were not obliged to share security intelligence with travellers.

“Passengers always want answers, communication and details, but ultimately when it comes to air travel security, airlines have no obligation to share their intelligence or security reasons with passengers,” he said.

“Just like intelligence in countries, it is the same for the risk assessment departments for airlines.”

Macheras acknowledged, however, that since this was a decision taken by the airline and not the UK government, “the move has created some confusion and concern that perhaps they BA have seen something or they acted on something that other airlines don’t know about”.

The British Foreign Office (FCO) updated its travel advisory on Saturday, asking those affected by the suspension of BA flights to contact the airline. It did not issue a warning against air travel to and from Cairo.

Egypt’s Ministry of Civil Aviation said in a statement late on Saturday the British embassy in Cairo had confirmed the decision was not issued by Britain’s transport or foreign ministries, adding it would add more flights from Cairo to London starting on Sunday “to facilitate transporting passengers during this period”.

While BA appears to be coordinating with Egypt Air to facilitate air travel for many passengers who were planned to arrive or leave Cairo over the coming week, Macheras said the move points towards a significant security concern.

“Egypt air travel security has been a concern to the UK and other major airways for a long time,” he said, referring to a 2017 BA decision to ban electronic devices larger than a phone inside air cabins on flights from Egypt to the UK.

“It suggests that whatever they are acting on this time could be more significant given that they are not introducing another electronics ban or banning cabin luggage. Instead, they are suspending the route with immediate effect.”

Egyptian airport security sources told Reuters news agency that British staff had been assessing security at Cairo airport on Wednesday and Thursday before taking the decision. They gave no further details about what prompted the move, however.

Egyptian newspapers suggested the week-long suspension was politically motivated, but according to Mecharas, that was unlikely.

“While it is normal in many parts of the world for the national airline to be used as a political chess piece to make a statement or represent a wider political tensions towards a country, this is not how it works in the UK,” he said.

“BA is a private company with shareholders. This is purely based on their risk assessments.”

Still, BA’s findings may influence the British government’s advice on travel to Egypt.

“Over the next few days, we will hear more from BA and about any changes from FCO because there is constant communication between them,” explained Macheras.

Several travellers told Al Jazeera they were concerned about their bookings on BA flights scheduled to leave or return to Cairo after the week-long suspension ends.

The British government advises against all but essential travel by air to and from the Egyptian resort of Sharm el-Sheikh, where a Russian passenger jet was bombed in 2015, killing all 224 people on board shortly after takeoff.

That attack, claimed by the Islamic State of Iraq and the Levant (ISIL or ISIS), prompted Russia to halt all flights to Egypt for several years.