My home was in Chechnya, and my mother was Natalya Estemirova, a human rights activist – and we were at war with Russia. The reason the war started always confused me. The general consensus was that it was a war for independence – but even as a child, I felt that it was more complicated than that. Listening to Mum’s conversations was no good; it was like tuning into a TV series halfway through. Dudaev, Raduev, Udugov, Lebed, Maskhadov, Shamanov – those names jumped out of her mouth like secret spells. Some of them were more familiar than others.

Aged eight, I have a nightmare. Russian soldiers are breaking down the door of our flat. Mum and I run into the sunlit living room. A hand grabs me roughly and yanks me away from my mother, causing a sharp pain in my elbow. Her screams echo in my ears – but I can’t utter a word. Then I hear a cry so heart-rending that it turns into a hoarse rattle: “Lana!” I’m forced on to my knees in the dark corridor. “Please, please, spare her,” I beg, before hearing a shot. No more screams. I slowly look up at a soldier, but I can’t see his face. “Just kill me,” I whisper and hear another shot. There is a sharp pain in my chest and I feel myself going. Then I wake up.

The Russians were obviously bad, because they came to our country, killed lots of innocent adults and children, destroyed houses and stayed; but I didn’t see much excitement coming from my mother as she was speaking about the Chechen generals, either. Although the political background of the war was a mystery to me, some things were clear. I understood that the strong always hurt the weak. Federal Russian troops enjoyed unlimited power and did whatever they pleased. They occupied our cities and villages, set up military camps and checkpoints. Their helicopters landed in the middle of football fields (I saw it happen once). They walked around armed to their teeth with entitled smirks, but there was also something else written on their faces – fear of the unknown. They didn’t know us and didn’t know what to expect from us, even the children. When I accidentally locked eyes with a soldier, he would quickly look away, almost embarrassed. 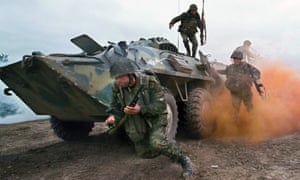 ‘Where Russian soldiers had been, Mum would follow, armed with no other weapon than a tape recorder.’ Russian troops in Khatuni, Chechnya, in May 2000. Photograph: EPA

Mum did everything that she could to shield me from the horrors of the war, but she herself never looked away. Market bombings, illegal prisons with blood-covered walls, torture victims, disfigured bodies – she’d seen it all. Mum became involved in the human rights movement in the early 1990s while she was a school teacher. In 1999, she started working full time at Memorial, one of the most prominent Russian human rights organisations. The violations perpetrated by the Russians were harrowing. Their list of war crimes included mop-up operations that resulted in the kidnapping and torture of innocent civilians, extrajudicial killings, rape and pillage – among many other forms of brutality.

This is Europe: stay close with the Guardian’s email updates

Where they had been, Mum would follow. Armed with no other weapon than a tape recorder and her flimsy Memorial ID, she would go from village to village, collecting testimonies from the victims and the family members of kidnapped men. If there was a chance that they were still alive, she would try everything in her power to get them out of prison. The prisons were more akin to concentration camps, where young men and sometimes women were tortured in the most unspeakable ways so they would sign confessions admitting they were terrorists. Sometimes it was too late and all that Mum managed to bargain for was the return of a body. Other times, she’d be more successful – and after endless appeals to state officials and military leaders, she managed to save the victims. She also wrote up the interviews into reports and newspaper articles: her main goal was always to let the world know what was really happening in Chechnya.

When Ramzan Kadyrov came to power in 2007, he vowed to rebuild Chechnya and destroy the remaining terrorist groups, all with heavy backing from the Kremlin. The ruins of Grozny gradually disappeared in front of my eyes, replaced with tacky new buildings. Despite the peaceful facade, the kidnappings and murders continued but were now mostly perpetrated by Kadyrov’s private army. Mum continued to expose the crimes of the new regime, although it became more and more dangerous to tell the truth. Kadyrov took every criticism as a personal attack and threatened human rights activists personally – including my mum.

On 15 July 2009, Mum was kidnapped outside our tower block and shot dead in the nearby republic of Ingushetia. My worst nightmare had come true.

Losing Mum felt like losing a part of my body. The aching of my soul spilled over, making my limbs hurt. It was itchy and irritating, it was uncomfortable, like an electric shock; sticky, like melted sugar. I wanted to jump out of my skin to stop feeling that way. 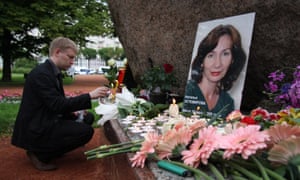 ‘My mother is gone and her murderers are walking free – and that is something I can never forget.’ A memorial to Natalya Estemirova, St Petersburg, Russia, July 2009. Photograph: Yelena Ignatieva/EPA

When, years later, I started writing a book about my mother, I realised just how unusual my childhood had been. Whether you grow up in the suburbs of London, or in a bombed house in Grozny, your childhood seems normal to you, because it is the only thing that you have ever known. There is a very particular image of Chechnya portrayed in the western media as a tormented, savage region with a complex history and a tinpot dictator. Although much of this is true, these images contribute to the “othering” of my country, making it harder to truly empathise with its people.

In many ways, people in Chechnya are not that much different from people anywhere. They fall in love, get divorced and argue with their in-laws. Kids at school prank each other, defy teachers, participate in competitions and skip classes. I wanted to capture in my book just how absurd our lives were: the music exam passed in the courtyard of a bombed-out building; a pack of dogs that ran through my classroom once because there were no doors; Mum typing away on her laptop in a corridor as we hid from shooting.

Much has changed in Chechnya in the decade since my mother’s murder. The human rights movement has been forced underground. Activists have been threatened and beaten, their offices burned to the ground. Oyub Titiev, a colleague of Mum’s at Memorial, has been charged, highly questionably, with possession of drugs. A stubborn little voice in my head asks whether Mum’s death was all for nothing.

Every blow to human rights activities in Chechnya devastated me – but then I felt a new wave of motivation to persist and continue writing. With every chapter of my book, I’m fulfilling my duty and keeping Mum alive, so there is always evidence that she was here, she loved life, she fought hard, she hated any form of injustice and was rubbish at looking after house plants. She had hazel eyes that changed colour. She loved wearing white in the summer, although her favourite colour was lilac. For some, she was Natalya Estemirova. For me, she was my mum: imperfect, comforting, loving, protecting, wise, creative, hilarious.

My mother is gone and her murderers are walking free – and that is something I can never forget; but sometimes, looking in the mirror, I can’t help but feel triumphant. The fact that I’m here right now, that I’m alive and safe but, most importantly, happy, feels like a victory for both of us. “Happiness is a true victory,” I scribbled once in the margins of my notebook when I realised for the first time in months that my depression had finally released me. And I will make sure that Mum lives on. Surrounded by light, her story – our story – will be passed on from my children to my grandchildren and so on. Light will wipe out the darkness.

Apple inc. under fire for labelling Crimea as part of Russia inside apps