Trump is reported to be on his way to the presidential palace. Mark Knoller, from CBS, sets out what to expect next.

Now that Putin has arrived, Pres Trump is on his way to the Presidential Palace. There’ll be a guest book signing and official welcome. Also a photo op at the start of the one-on-one meeting with Putin.

Andrew Roth has some theories of the power games currently being played.

Some theories on the power politics taking place right now. Putin arrives late but still first and could be seen as welcoming Trump to the presidential palace. Trump counters by sending a massive advance convoy in Mercedes. Still waiting for Trump himself to set off.

Putin’s motorcade has arrived late at the presidential palace in Helsinki for the summit. There’s been no sign yet of Trump. He now appears to be trying to make Putin wait.

There’s lots of this macho stuff: Putin’s limo is slightly bigger than Trump’s. 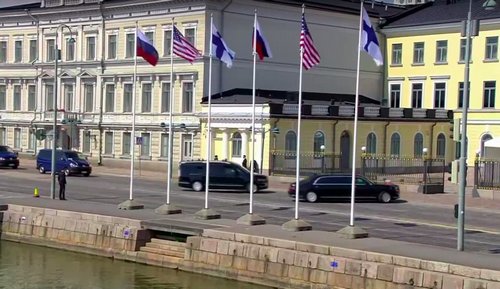 And now Putin has arrived at the presidential palace in Helsinki. pic.twitter.com/hZCHuItXsf 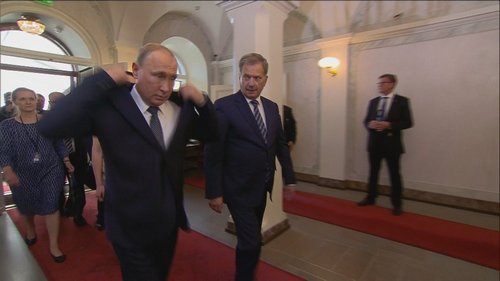 Putin adjusts his suit jacket after limo ride in from the airport, and entering Presidential Palace summit site. pic.twitter.com/kI8zktVtuo

As noted earlier, Trump’s view echoes the Kremlin claim that the US is to blame for the deterioration in the relationship.

The hold up appears to be on Putin’s end as he has just this moment landed in Helsinki.

There has been no response from Trump’s press secretary Sarah Sanders when she was asked about the delay.

Putin briskly stepped off his plane, before being greeted on the tarmac. He took of his jacket and waved for the cameras. And then got into his huge new limo. 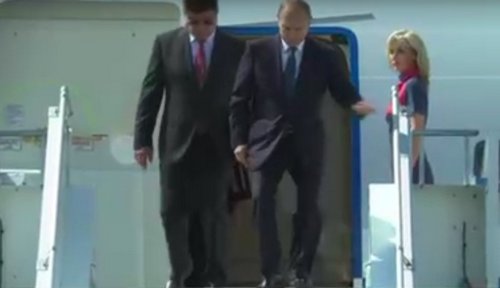 The Washington Post’s Philip Rucker reminds us that the summit was due to start at 1pm local time (11am BST).

Summit was set to begin 11 minutes ago, but leaders are not at the palace yet. It appears Putin is holding up Trump. Keeping people waiting is the Russian president’s MO to assert dominance.

President Trump and Melania were scheduled to leave their hotel 26 minutes ago. Pool says they are still waiting, presumably on Putin. https://t.co/uHI4yIU4Nu

Vladimir Putin’s plane has touched down in the Helsinki almost an hour late. 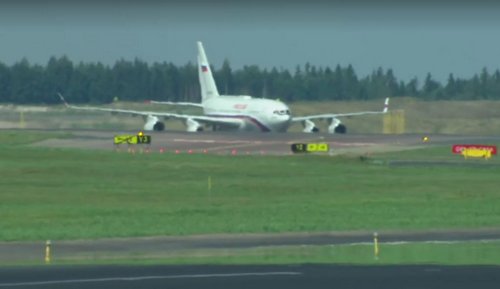 Putin is running a bit late, but he’s arrived here in Helsinki. pic.twitter.com/JROj8ou7HT

Wondering how Donald Trump stacks up on being made to wait by Putin?Putin is current about 55 minutes late landing in Helsinki, taking him past Pope Francis (50 mins) and approaching Modi (1 hour). Things get bad at Lukashenka (3 hours) and Merkel (4 hours 15 min). pic.twitter.com/zyfvYazsjk

Ahead of Monday’s meeting, Kremlin spokesman Dmitry Peskov told broadcaster RT that the men had no strict agenda but recognize their “special responsibility” for global stability.

He said European countries shouldn’t be worried about a possible US-Russian rapprochement or decisions about Europe made “over the heads of Europeans.”

Peskov said the Russian leader respects Trump’s “America first” stance because Putin puts Russia first, but said the only way to make progress at the summit is if both sides are open to finding areas of mutual benefit.

Russian officials say Putin is expected to reiterate denials of meddling in the 2016 US presidential campaign.

The United States is not the only side complaining about cyberattacks ahead of Monday’s summit.

Vladimir Putin told law enforcement officials on Sunday evening that the country had seen a sharp rise in cyberattacks during the World Cup as he thanked Russian law enforcement in person for providing security during the tournament.

“Almost 25 million cyberattacks and other situations of criminal impact on the Russian information infrastructure associated with the organization of the World Cup were neutralized during the championship,” Putin said In Moscow on Sunday evening. The remarks were reported on Monday morning.

Russian officials have pushed the idea of a joint agreement on cybersecurity with the United States for several years. Putin will likely use that fact as a defence when Trump asks about Russia’s election meddling during the 2016 elections, which he said he would “certainly” do in a television interview.

Russia would like an agreement on “informational security,” and includes limits on content that may be objectionable to governments.

The United States has traditionally defined the issue more closely as cybersecurity, which concerns the use of hacking technology but not content on social media.

Putin’s trip to Helsinki marks the first foreign trip for the Russian president’s new Cortege limousine, which was unveiled with great fanfare at his inauguration in May.

The Kremlin pool reporter for Komsomolskaya Pravda, Dmitry Smirnov, snapped a picture of the limousine at Helsinki’s airport where Putin is expected to land more than 45 minutes late. 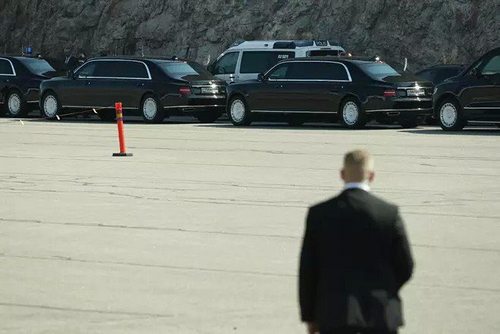 The Kremlin pool arrived earlier in a separate plan and have some time on their hands.

At Putin’s inauguration, the limousine drove him about 200m from the Kremlin’s Senate Building to the Andreevsky Hall.

Monday’s route will be slightly more arduous, usually about a 25-minute ride to the city’s Presidential Palace where he will meet one-on-one with Trump.

He has also shown off the limousine to the Crown Prince of Abu Dhabi, Mohammed bin Zayed.

Putin’s lateness is being interpreted as diplomatic gamesmanship. Speaking to CNN while we still wait for Putin’s plane to land in Helsinki, Thomas Pickering, former US ambassador to the UN, said:

Obviously the lateness is something he could have avoided, so it has some intent. That intent obviously is in some ways to level the playing field of publicity about this meeting so that it isn’t all Trump, whatever he’s saying.

Newspaper billboards in Helsinki attack the record of both Putin and Trump on free speech.

Helsingin Sanomat, one of the country’s top news outlets, unveiled nearly 300 billboards calling out the leaders’ respective records of rocky relations with the media. The billboards were placed along the leaders’ route to the summit.

Aside from the welcome billboard which reads “Mr. President, Welcome to the Land of Free Press,” most of the others feature headlines published in the newspaper over the years, according to a press release.

“The headlines highlight the presidents’ turbulent relations with the media and were published between the years 2000 and 2018,” the statement said.

Editor-in-chief Kaius Nieme also explained that the banners are intended as a display of support for “colleagues who have to fight in ever toughening circumstances on a daily basis both in the U.S. and Russia,” noting that both countries sit pretty far down on the 2018 World Press Freedom Index. Russia is ranked 148 and the U.S. sits at 45. Finland is ranked fourth.

Putin already has the edge in pre-summit posturing by keeping Trump waiting. His plane to Helsinki is reported to be running late.

Looks like Putin will keep Trump waiting. He’s landing about 45 minutes late at 5:47 EST, just about the time he was supposed to be arriving at the Presidential Palace. #HelsinkiSummit

European Council president Donald Tusk has suggested that Trump is spreading fake news by telling CBS that the European Union is a foe of the US.

America and the EU are best friends. Whoever says we are foes is spreading fake news.

Trump is confident of getting on with Putin, he told Piers Morgan for ITV’s Good Morning Britain on board air force one.

Trump accepted that Putin “probably is” a ruthless person, but couldn’t tell yet.

Good Morning Britain quoted him saying: “I don’t know him… I met him a couple of times… I think we could probably get along very well”