Speaking in New York at a screening of The Great Hack, a Netflix documentary about the Cambridge Analytica scandal, the 2016 Democratic presidential candidate cited the threat to upcoming elections in both the US and UK as she made the damning remarks about Facebook’s decision to allow politicians to lie in adverts posted to its platform.

Mark Zuckerberg “should pay a price” for what he is doing to democracy, Hillary Clinton has said, as she expressed doubts about whether free and fair elections were even possible in the wake of Facebook’s decision to not factcheck political advertising.

Her intervention comes amid speculation she may mount a third bid for the presidency.

She said it was inevitable that false information on Facebook would have an impact on elections “because propaganda works”. In 2016, she said fake news on Facebook that Pope Francis had endorsed her opponent, Donald Trump, “really did have an impact” and predicted “it’s only going to be more powerful going forward because it is more well tested. They know what they were successful at.”

She added: “And we are getting warning signals all the time about what is happening right now and how it is likely to affect our next election.”

Cambridge Analytica used illegally harvested Facebook profiles to target voters in the US election but Clinton said this was just the “tip of the iceberg” in terms of the challenges facing democracy. Nonetheless her harshest remarks were reserved for Facebook.

“When Facebook is the principal news source for more than half of the American people, and the only source of news that most of them pay any attention to, and if it announces that it has no responsibility for the airing of false ads … how are you supposed to get accurate information about anything, let alone candidates running for office?” 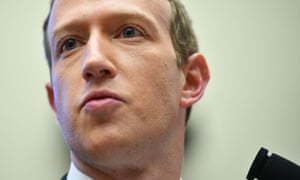 Asked if she thought there was any connection between the closed-door meeting Zuckerberg had with Donald Trump at the White House and the subsequent decision by Facebook to change its policy around factchecking “false, deceptive or deliberately misleading content” by politicians, she said she couldn’t “draw any conclusions about closed-door meetings, not only with Trump but with Tucker Carlson of Fox News and with rightwing website Breitbart and with many others that have been going on at Facebook quarters”.

But she went on to say: “If I were of a conspiratorial mindset, I might suggest that there seems to be some connection.”

Clinton said she believed we were seeing “a war on truth” in which the “manipulation of information” served to further the interests of a set of “incredibly wealthy people who believe they can do whatever they want to do”.

She also drew attention to the connections between Brexit and the Trump campaign that she said she had not been aware of at the time. She had been “somewhat taken aback” by the Brexit result, she said, but “I didn’t, at that time, see the direct connection. I didn’t know about all the involvement of the same players in Brexit, the same players in our election.”

She said The Great Hack had been “a difficult film for me to watch” but also “so true to my own understanding of what had happened”. She said people needed to see the film because “still to this day there is a sense of disbelief about a lot of what has happened”.

The documentary, directed by Karim Amer and Jehane Noujaim, examined the use of data by Cambridge Analytica by the Trump campaign to target “persuadables” or floating voters and how the Russian government used Facebook’s platform to subvert Clinton’s campaign. 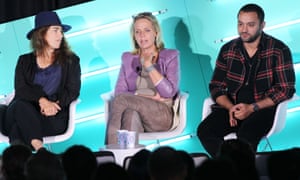 Clinton described how, when the first reports started coming in of Russian involvement, her team had tried to raise the issue but it had been impossible to get anyone to take it seriously.

“When the Russians started dumping emails out around our convention and my campaign went out and tried to talk about that on television they were basically laughed at. It was like: ‘Oh yeah, right, now she’s going to blame the Russians.’”

She pointed out that it had been proved that the Russian government, as well as stealing emails, had also stolen her campaign’s voter data. “And then you find out that Paul Manafort is giving polling data to a Russian who has obvious ties with Russian intelligence.

“And you piece all this together and you can’t make it up. And because it’s hard to make up, it’s hard for people to believe because it’s so far out there.”

The situation only seemed to have become worse, she said. “Everyone knows it’s still going on and it will be that much harder to combat.” And she said the amount of money going into the 2020 Trump campaign combined with exhaustive testing had already put it streets ahead of her fellow Democrats.