Three people were killed in clashes with security forces in Senaka, about 40km (23 miles) south of La Paz,  according to the country’s Ombudsman, after Bolivian police and military forces used helicopters and armoured vehicles to clear access to a major gas plant that had been barricaded by protesters.

More than a week after Morales, Bolivia’s charismatic left-wing leader and its longest-serving president,  resigned over allegations of election fraud, the country remained marred by violence, and in political limbo.

Roadblocks have taken their toll, causing residents to queue for hours to buy rationed food and for fuel to become so scarce that many in poorer neighbourhoods had to cook over firewood.

Morales resigned on November 10 after pressure from the military to step down following an Organisation of American States (OAS) audit that found electoral irregularities in the October 20 vote. 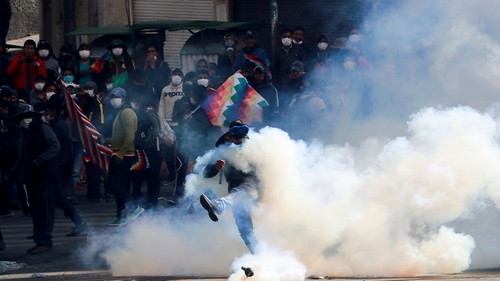 The 60-year-old former coca farmer and the Andean nation’s first indigenous leader, has denied meddling with the election and accused right-wing forces of ousting him in a coup. He flew to Mexico after accepting an offer of asylum.

Since then, Morales supporters have taken to the streets, demanding the return of the leader and the withdrawal of military forces from the streets.

Opposition Senator Jeanine Anez, who assumed the role of interim president after four officials in the line of succession resigned in support of Morales, has accused the exiled leader of stoking the violence from abroad.

Clashes on Friday left nine pro-Morales coca farmers dead raising concern over excessive use of force by security forces and increasing demands from protesters for Anez to step down.

“The fight is now, if they want the people to calm down, this coup government needs to resign,” said Eusebia Mamamni, a 57-year-old artisan who has participated in the daily marches in La Paz.

At least 27 people have died since the crisis broke out, according to Bolivia’s Ombudsman’s office. 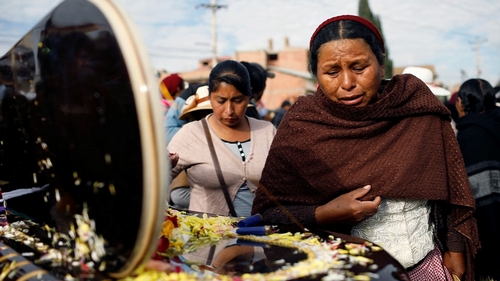 Morales supporters mourn the death of a man, who they say was killed by security forces, in Sacaba, near Cochabamba, Bolivia Marco Bello/Reuters

Raul Penaranda, a journalist and political analyst based in Bolivia said that the street mobilisations are meant to put pressure on Anez’s government.

“This is a negotiation tactic that Morales hopes will enable him to return,” Penaranda told Al Jazeera. “But it will hurt him and his party electorally.”

From Mexico, Morales has hinted he could return to the country but has said he would not run again in a new election.

Legislators from Morales’s Movement Toward Socialism Party (MAS) and Anez have been in talks to resolve the political crisis and agree on the terms of new elections. No date has yet been set for the polls but Anez said that Morales could not participate in elections and would have to face justice for electoral fraud if he returned.

MAS, which holds a majority in Bolivia’s Congress, has not yet announced a candidate. The party cancelled a vote on Tuesday that was expected to reject Morales’s resignation. 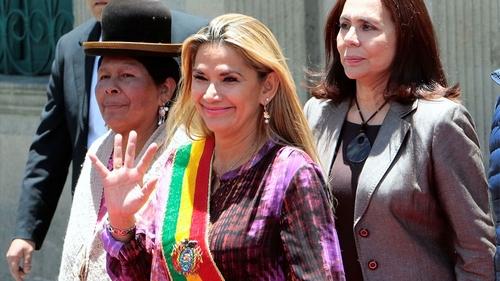 Anez, who belongs to the small Democratic Unity party, has said her government is only tasked with restoring peace in the country and announcing a new date for the elections within 90 days of taking office.

“We’re seeing strong statements as well as strong and divisive policy decisions that many think are beyond the mandate of an interim government for a president that has not been elected,” Olivia Arigho-Stiles a researcher at the University of Essex told Al Jazeera from La Paz.

Anez has broken relations with the Venezuelan government, accused Cuban doctors of involvement in protests and pulled Bolivia out of left-leaning regional blocs ALBA and Unasur. She also fired most ambassadors named by Morales.

Marcelo Arequipa, a political scientist based in Bolivia, said that the actions are part of the government’s aim to establish authority and quell the street protests.

“It’s a very weak government whose discourse is strong, and appeals to a logic of ultra-conservatism,” Arequipa told Al Jazeera.

“But on the inside it’s very weak and very reliant on the armed forces,” he said. 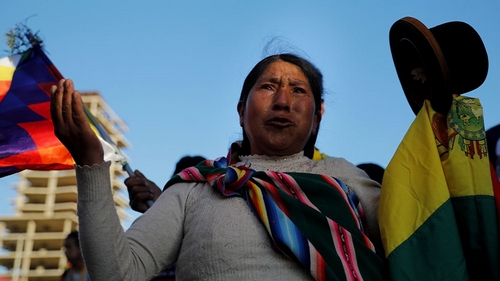 A Morales supporter gestures during a demonstration in Cochabamba, Bolivia Marco Bello/Reuters

A very deep base

As key transport routes continued to be blocked across the country, shops were short of basic foods and rubbish laid in piles on the streets on Tuesday, threatening to drag the country into further turmoil.

But protests showed no signs of abating.

“I feel like this is not my government at all,” Maria, a 53-year-old indigenous artisan, said from a demonstration in La Paz.

“Morales gave the village people education and dignity. What have other governments given us?” Maria, who preferred to only give her first name, told Al Jazeera. “I came here to defend my roots.”

Morales, who became president in 2006, ushered Latin America’s poorest nation into economic prosperity, benefitting from a rise in prices of commodities.

He also advanced the standing of the country’s indigenous majority population after decades of marginalisation by giving them government representation and allowing indigenous communities to have self-rule. 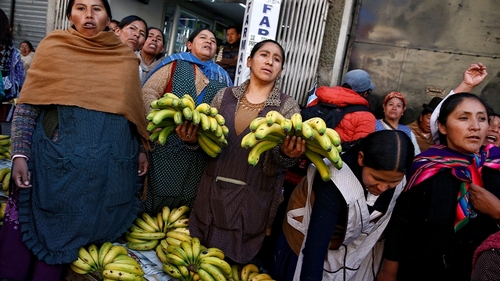 But voters became disenchanted with his seeming reluctance to relinquish power and insisting on running for a fourth term in office, in defiance of a referendum on term limits.

Eduardo Gamarra, professor of political science in the department of politics and international relations at Florida International University, said there is a profound sentiment of weariness among Bolivians, who grew tired of the concentration of power in Morales’s party.

Morales also lost the support many young people, including university students, who took to the streets in large numbers demanding his resignation.

He remains a highly popular figure, however, with strong support in the highlands and rural areas as well as among members of his native Aymara ethnic group.

“Morales has a very deep base, his followers are absolutely true believers,” Gamarra told Al Jazeera.

“He has given them a voice.”

With additional reporting by Monica Garcia in La Paz.

This man runs a war machine