The mobilisation on Sunday was one of the biggest seen in Castelo Branco region, 200 kilometres north of the Portuguese capital, Lisbon, and included 1,100 firefighters and 340 vehicles, according to the rescue services. 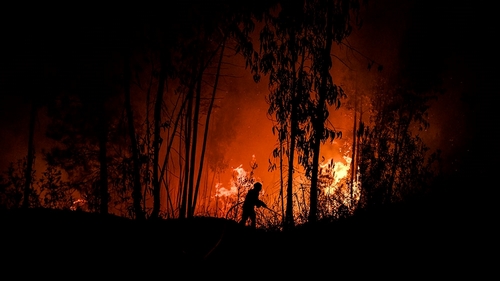 More than a thousand firefighters have been deployed to battle a wildfire sweeping across central Portugal.

The biggest effort – 760 firefighters, 230 vehicles and 11 planes and helicopters – battled to douse flames in the municipality of Vila de Rei, which had spread nearly 25km.

One seriously injured civilian was evacuated by helicopter to Lisbon, the commander of the civil protection authority for the region, Luis Belo Costa, told a news conference.

Four firefighters were also reported injured, and a further three were hurt after their fire engine collided with another.

“Given the difficult terrain, we have not succeeded in getting the fire in Vila de Rei under control, but have only contained about 60 percent of it, despite a lull in the wind,” Belo Costa said.

The army said in a statement it was dispatching 20 soldiers and machinery to open routes “to facilitate access” for the firefighters.

In a message, President Marcelo Rebelo de Sousa expressed his “solidarity with the hundreds fighting the scourge of the fires”.

Two other forest fires reported on Saturday have since been brought under control.

While a number of small villages were evacuated as a precaution overnight, no additional measures were planned on Sunday. But that could change “if the situation deteriorates,” Belo Costa said.

Five regions of central and southern Portugal were on maximum fire alert on Sunday because of the dry weather and winds.

The centre of Portugal is hilly and covered in dense forest and is regularly ravaged by fires, including the deadliest in the country’s history where 114 people died in two separate blazes in June and October 2017.

Many of those who died were killed in their cars as they tried to flee the flames.

This year, several national highways have been closed to prevent a repeat of 2017 and a number of villages in the region have been evacuated as a precaution, the rescue service said.

In recent days, temperatures have soared across the region, with Castelo Branco reaching daytime high temperatures of 38.2 degrees Celsius, six degrees above the average.

Temperatures are expected to reach 40 degrees Celcius by Monday.

With no sign of rain in the forecast and winds still strong, the fire danger remains high.