Once again, Britain is being dragged along by international events, lacking an independent, well-considered policy, compromising its principles, and at the mercy of more powerful antagonists. This sense of drift, of a rudderless ship of state bobbing haplessly in hostile waters, is pervasive and alarming. To say it is the product of temporary uncertainty, caused by a change of prime minister, is to underestimate the problem. In this respect, Boris Johnson is both symbol and symptom of a deeper malaise. 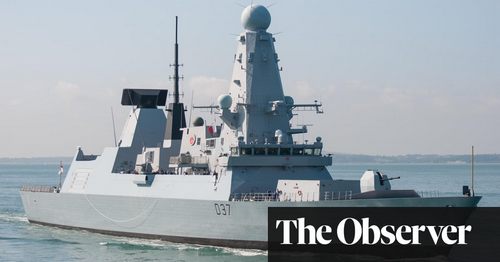 The government’s decision to send a second Royal Navy warship to the Gulf will intensify concerns that Britain is unintentionally sliding into armed conflict with Iran. The deployment of HMS Duncan, a Type 45 destroyer, will be seen in Tehran as a gratuitous escalation of an already tense regional situation. It may help improve security for the 15 or more British-owned oil tankers that traverse the Gulf each day – or it may worsen it. The move potentially turns the warships and the tankers into targets, should Donald Trump impetuously decide to start a war.

Britain is in the grip of a fundamental crisis of confidence that is negatively affecting its governance, its institutions and its place in the world, and it is a crisis that appears to be worsening. Historians may one day trace its roots into the distant past but for now, it is enough to say that this national haemorrhage of shared purpose and belief began in earnest in June 2016, when Britain voted to leave the EU. The subsequent controversy, and resulting impasse, have proved uniquely corrosive and damaging.

John Sawers, a former MI6 chief and seasoned diplomat with no particular axe to grind, warned recently that Britain was experiencing “a political nervous breakdown” for which no remedy was in sight. He questioned the calibre of politicians, Conservative and Labour, who seek to lead the country amid great anxiety and division. Whoever next enters Downing Street, he said, would be launching into an immense gamble: “As we leave the European Union, we take a huge risk to our international standing and to the strength of the British economy.”

Extreme nervousness among government officials, civil servants and diplomats that Britain, as presently run and organised, may not be equal to this challenge is everywhere apparent. One key indicator is virtual paralysis in parliament and Whitehall over both Brexit and non-Brexit matters; the current policy vacuum is simply staggering. Another indicator is collapsed rules of collective cabinet responsibility. Yet another is the reports, seeping out almost daily, that government departments are unprepared for Brexit, that civil servants are overwhelmed, and that no-deal chaos awaits on 31 October.

The recent torrent of unauthorised disclosures of confidential material speaks of a system close to breaking point. Last May saw an unprecedented breach at the National Security Council, relating to the Chinese company, Huawei. Last week’s indefensible leaking of critical views of Trump privately expressed by Kim Darroch, Britain’s ambassador to Washington, also reflects this wider internal governmental breakdown. Darroch’s understandable but regrettable resignation was yet another shock to the government’s central nervous system.

The impact of this betrayal on Britain’s diplomats based overseas, and on civil servants generally, is potentially very serious. Who can now be trusted in a dangerous, treacherous and competitive world if your own side is ready to sell you down the river? What to do when politicians such as Johnson will not hesitate to throw you “under the bus”, as the Foreign Office minister Alan Duncan put it, if it helps further their personal ambitions?

Johnson’s conduct in the Darroch affair, and his weaselly attempts to exculpate himself, is a disgrace. This alone should disqualify him from the premiership. But while that outcome seems unlikely, what is more certain is that foreign predators are watching Britain’s neurosis with keen anticipation. Reacting to mild criticism over recent violence in Hong Kong, China rudely told Britain to mind its own business. Sensing weakness, the hard men in Beijing will do all in their not inconsiderable power to turn British discomfiture to future advantage.

Expect no less of Vladimir Putin. Theresa May’s decision to briefly meet Russia’s president at the G20 summit in Japan was a typically British attempt to keep open lines of communication, even when her interlocutor is guilty of the most brazen acts – not least, last year’s Salisbury poisonings. Yet Putin’s motivation was all crude calculation, zero goodwill. He hopes to prise a disoriented, post-EU Britain away from its transatlantic anchors. Other countries are circling, too, seeking choice pickings from the Brexit carcass.

And then there is Trump’s America, leading Britain by the nose into another Middle East war of choice, treating its ambassador like a mere flunky, personally insulting the prime minister, demanding a trade deal on invidious terms, and all the time undermining the international rules-based order that postwar Britain has spent decades building and nurturing. Little wonder that the EU looks on aghast. Europeans are among the few friends Britain has left – yet they are wilfully, neurotically spurned. This is not rational behaviour.

Russians go to polls in local elections after crackdown on dissent