Someone in Downing Street calculated that it was less embarrassing to suppress the intelligence and security committee’s report into Russian interference in the UK than it was to publish it.

Boris Johnson’s refusal to allow voters to read the report made waves in parliament a week ago, yet the election campaign has offered a convenient distraction since then. The government can survive one uncomfortable news cycle; but a 50-page report full of revelations about rich Russians funding political parties and associating with politicians, as well as Russian bots meddling in the referendum, could have fed the media for days.

For far too long, our politicians have failed to appreciate the risks that come with Russian money

The report will only emerge once we have a new parliament, by which stage any revelations it contains will have lost their power, and thus be safely ignored. This is a shame, because the toxic relationship between the Russian and British elites is something that needs full exposure. They have been collaborating to their mutual enrichment, and to the detriment of democracy and accountability everywhere, for decades.

I am part of a team that runs “kleptocracy tours” in west London, exposing how much of our capital city had been bought by foreign politicians and oligarchs. We always begin the tours just down river from the Houses of Parliament, beneath the balconies of the duplex apartment belonging to Russia’s former first deputy prime minister Igor Shuvalov.

Perhaps even more remarkable is the disused tube station belonging to Dmitry Firtash, the Ukrainian who ran Gazprom’s Ukraine joint venture. The Ministry of Defence sold him Brompton Road station in 2014, without even demanding the full £53m price. Instead it let him use a scheme designed to encourage social housing, under which purchasers of government property pay just a third up front.

Washington took a different approach: just weeks after our government cut this deal, the FBI issued an arrest warrant for Firtash on corruption charges. He has been stranded in Austria fighting extradition ever since – which means the tube station remains undeveloped, and we never even got the full price for selling out. That could have been a moment for the government to consider whether some fortunes are too tainted to touch. 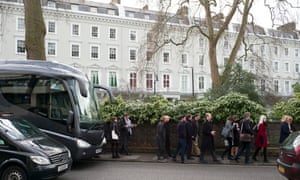 The ‘kleptocracy tour’ which takes people around properties in London owned by politicians and oligarchs. Photograph: Graeme Robertson/The Guardian

We often look for the origins of this see-no-evil approach in the chaotic 1990s, when Russia flipped from autocracy to kleptocracy, and so many of the profits got spent on London real estate. But it actually began 40 years earlier. Back in 1956, in one of the tensest periods of the cold war, English and Soviet banks saw an opportunity to undermine the US-led international order. The USSR started banking its dollars in London, where the locals lent them out at rates which at the time US banks were legally unable to match.

That generated a new revenue stream for a moribund City of London, disabled a crucial lever Washington could use to influence Moscow’s behaviour, and gave an aggressive Soviet Union unrestricted access to the global financial system. Bankers had created a brand new phenomenon – they called it “offshore” – and regulators positively welcomed it.

London, and its associated tax havens, became an ultra low-regulation market which anyone could access. By the early 1990s, central bankers in Moscow were using a Jersey shell company to earn themselves profits while hiding the government’s money from the International Monetary Fund. If even the Russians tasked with regulating their country’s financial system were at it, it’s no surprise that everyone else was too: London was the key conduit in helping well-connected Russians suck money out of their country and spend it on luxury goods abroad.

As Florida was to Al Capone, so Britain was to Russia’s new oligarchs; and, as with Capone, where the money went, the violence followed. It was not just Alexander Litvinenko who, a UK public inquiry found, was “probably murdered on the personal orders of Vladimir Putin” after he shared the financial secrets of Kremlin insiders with Spanish and British investigators. Thanks to an investigation by Heidi Blake and her colleagues at Buzzfeed News, we know perhaps a dozen other people were killed here too (Blake lays out the details in an excellent book, published later this month).

For far too long, our politicians have failed to appreciate the risks that come with Russian money and have continued to welcome it enthusiastically.

In 2018, Washington imposed sanctions on the oligarch Oleg Deripaska’s En+ business empire, as part of its targeting of people it says are linked to the Kremlin. (The sanctions were subsequently lifted, after Deripaska reduced his controlling stake in the company.) Britain took a different approach. In late 2017, the London Stock Exchange floated the firm’s shares, earning $1.5bn for En+ and millions for its City advisers. Greg Barker, a former energy minister who is now a Tory member of the House of Lords, chairs its board. As with the invention of the offshore dollar market in the 1950s, this undermined the foreign policy of our American allies without any clear gain for anyone outside the City.

Our politicians have been happy to talk tough on Russia – who can forget then defence secretary Gavin Williamson telling Moscow it should “go away and shut up”? – but their deeds have told a different story. British governments, under both Labour and Tory prime ministers, have consistently fought hard to prevent Putin’s repeated crimes and provocations from derailing profitable business ties. This must stop. We cannot let the Russian elite corrupt our country as they have corrupted their own.

The report needs to be published, and then we need to build on its revelations, to have a rational debate about what exactly it is we’re selling when we let the Russians buy so much of the UK.

• Oliver Bullough is the author of Moneyland: Why Thieves and Crooks Now Rule the World and How to Take It Back