On Sunday, Spanish voters will head to the polls for the second time this year, to participate in what will be the country’s fourth general election in four years. This is a record even for a country known for its political crises. 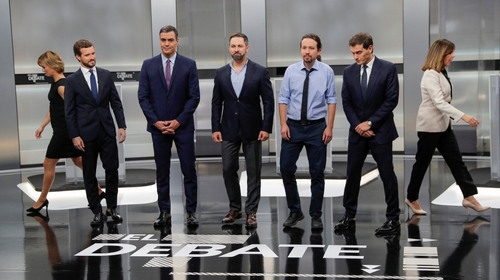 This election could not have come at a worse moment for Spain; distrust and suspicion reign among voters who are tired of four years of political volatility. The ongoing instability has been caused by the demise of the country’s two-party political system with the rise of the left-wing, anti-austerity Unidas Podemos and the right-wing, neoliberal Ciudadanos in 2014. Spain’s two main parties, the Socialist Party and the Popular Party, have repeatedly failed to form governing coalitions with these newcomers, plunging the country into an endless state of political uncertainty. Though coalitions were formed on the regional level, the failure to achieve these nationally has caused some voters to turn away from mainstream parties in the last few years and opened up space for two additional, more radical, parties to join the fight for power: On the right, the homophobic and anti-immigrant Vox, led by Santiago Abascal, and on the left, the progressive Mas Pais (More Country), led by Inigo Errejon.

The failure of the two parties on the left – Pedro Sanchez’s Socialist Party and Pablo Iglesias’s Unidas Podemos – to form a governing coalition following April’s general election, in which they jointly received 43 percent of the vote, gave all political actors in Spain’s political arena another chance to try and convince voters that they will be able to resolve the country’s political impasse.

The outcome of Sunday’s election will depend on whether voters will give Iglesias and acting Prime Minister Sanchez a second chance to try and form a coalition and on their reaction to the two most important events of the year: The harsh sentences the Supreme Court handed down to political and civic leaders of Catalonia and the exhumation of former dictator Francisco Franco’s remains.

After two years of pretrial imprisonment, 422 witnesses, and unprecedented media coverage, in October, the Supreme Court sentenced nine of the 12 Catalonian defendants to prison sentences ranging from nine to 13 years for their role in the unilateral secession attempt of October 2017. Although the defendants were not convicted of rebellion, the most severe of the charges, the court found them guilty of sedition, misuse of public funds and disobedience. As soon as the verdict was announced, pro-independence protesters took to the streets peacefully, disrupting highways, high-speed rail lines and Barcelona’s El Prat Airport. Unfortunately, both the national police and their regional Catalan counterparts began beating demonstrators and attacking journalists. A group of violent protesters responded by throwing acid at police officers and setting cars and rubbish bins on fire for several nights. After these riots, peaceful demonstrations returned to Barcelona demanding the release of all political prisoners.

As tensions simmered in Catalonia, Madrid exhumed the remains of Franco despite strong opposition from the political right. The exhumation would not have occurred without the efforts of the Association for the Recovery of Historical Memory (ARMH), which represents thousands of victims of his murderous regime. In order to begin gathering testimonies and identifying those dumped in mass graves throughout Spain, the ARMH was forced to file a lawsuit in Argentina because of a 1977 Spanish amnesty law meant to smooth Spain’s return to democracy. After a decade fighting the state-imposed amnesia – beautifully conveyed in the documentary The Silence of Others – they finally succeeded. In 2018, Sanchez not only facilitated the opening of mass graves but also promised to exhume Franco’s remains from the grandiose mausoleum they have been kept in for decades. The descendants of Franco and some on the political right denounced the plans for the exhumation as “useless”, but his remains were eventually reburied in a small family cemetery in October.

The unexpected success of far-right Vox during the regional elections in Andalusia last December forced Popular Party and Ciudadanos to move further to the right and to radicalise their programmes. As a result, they both refrained from applauding the exhumation of Franco and got into a competition over which one of them would take a harder line on Catalonia.

They accused Sanchez of being too soft on the protesters in Catalonia and using the exhumation simply for electoral purposes. Popular Party leader Pablo Casado said that Sanchez should have activated the National Security Law to end Catalan protests, while Albert Rivera of Ciudadanos argued that Madrid should have imposed direct rule to remove the premier of Catalonia and forcefully take the protests under control. The right’s reaction to Franco’s exhumation was also predictably unreasonable. Casado said he would not have spent one cent on the exhumation. Rivera, meanwhile, proclaimed that he does not think “the bones of a dictator who died 44 years ago should be a government’s priority.”

Fighting to survive in the event the Amazon is under breach

Their reactionary stances on these issues caused them to lose the support of many moderate centre-right voters. Although they are still more united than the left, considering they govern several regions together, the latest polls indicate that they will not achieve enough votes in Sunday’s election to form a governing coalition.

This past Monday, Casado, Sanchez, Rivera, Iglesias and Abascal faced each other in a televised debate, which was once again focused on the issues of Catalonia and Franco’s exhumation. The fact that other urgent matters – high unemployment, the feminist emergency and much needed constitutional reforms – were secondary at the debate clearly signalled that the party leaders believe that their opinions on the future of Catalonia and the legacy of Franco will determine the result of Sunday’s election.

During the debate, Sanchez tried to woo moderate right-wing voters disillusioned by the Popular Party and the Ciudadanos’ move towards the far-right, by taking on centrist positions on Catalonia. Nevertheless, he also tried to reach out to left-wing voters by pledging to shut down the Francisco Franco Foundation and to make it a crime to praise fascism. Iglesias, however, questioned the sincerity of Sanchez’ left-wing overtures by saying he suspects following Sunday’s election the acting prime minister may once again refuse to join forces with his left-wing party and instead choose to try and form a minority government with outside support from Podemos and others.

The fear now is that the power games of the leaders on the left may pave the way for a reactionary right nostalgic for Franco and determined to apply unnecessary measures in Catalonia to take over. This would not only exacerbate the country’s deep-set political instability but also have devastating long-term consequences for Spain’s democracy.