William Barr met British intelligence officials in London on 29 July at a meeting attended by intelligence agencies from the Five Eyes group. He was accompanied by the US homeland security department’s acting deputy secretary, David Pekoske.

The US attorney general met UK intelligence agencies in the summer to discuss Britain potentially cooperating with Donald Trump’s administration on an inquiry examining the FBI’s investigation into alleged collusion with Russia, according to sources.

The meeting was formally about the risks and opportunities of new technologies but Barr also raised his inquiries into the FBI investigation.

A Whitehall official said the issue of UK cooperation was discussed informally and only on the margins of the meeting. US officials have said Barr’s role is confined to ensuring that the official inquiry team members are introduced to the right people.

It has been reported that Barr is pressing a range of foreign powers to cooperate with his effort to piece together the origins of the FBI investigation into the Trump campaign’s links with Russia.

Barr’s critics claim he is seeking to discredit the FBI investigation by constructing a vast conspiracy theory that foreign powers were working to secure Hillary Clinton’s election in 2016.

The inquiry by the special counsel, Robert Mueller, showed that Russia was attempting to swing the presidential election in favour of Trump.

Barr’s counter-attack has been given an added urgency as Trump seeks to find a way to block potential impeachment hearings. The president is facing claims he threatened to withdraw military aid from Ukraine unless it cooperated with his efforts to find dirt on the former US vice-president Joe Biden, a potential challenger in the 2020 presidential election.

What is the Trump-Ukraine whistleblower scandal?

On 25 July, US president Donald Trump called Ukraine’s president Volodymyr Zelenskiy. During the course of the call he reportedly asked the Ukrainian leader eight times to investigate former US vice-president Joe Biden and Biden’s son Hunter. It is additionally reported that Trump ordered his staff to withhold nearly $400m in aid to Ukraine days before the call took place.

Biden is one of the frontrunners to win the Democratic nomination and take on Trump in the 2020 presidential election. Trump confirmed he discussed the Bidens with Zelenskiy, and accused the pair – without offering any evidence – of corruption.

A US intelligence community whistleblower filed a report after becoming alarmed at Trump’s behaviour in the matter. The White House refused to release the substance of the whistleblower complaint, setting up a confrontation with Congress over the release of information. Complaints of this nature are usually reported to Congress within seven days.

Trump’s personal lawyer, former New York mayor Rudy Giuliani, has admitted asking the Ukrainians to investigate the Bidens. It is illegal for a political campaign to accept a “thing of value” from a foreign government. Democrats say an investigation into a political opponent – for which Trump appears to have been pushing – would amount to a thing of value.

Mike Pompeo, the US secretary of state, began a brief visit to Italy on Tuesday, days after Barr had been in Rome seeking details of what cooperation the Italians may have given to the FBI inquiry.

It was reported on Monday that Pompeo had taken part in Trump’s controversial call to the Ukrainian president, Volodymyr Zelensky. Pompeo also wrote to the House foreign affairs committee rejecting demands from House Democrats for five current and former state department officials to testify before committees investigating the Ukraine scandal. 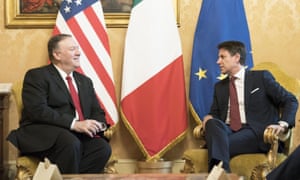 Trump is openly urging his aides to get information from Italy, the UK and Ukraine, reports have said. The president has said: “It’s the greatest hoax, probably, in the history of our country and somebody has to get to the bottom of it.”

Trump’s administration has mounted two investigations into whether overseas agencies played a role in investigating his 2016 campaign. The first inquiry, led by the justice department inspector general, Michael Horowitz – now completed but unpublished – focussed narrowly on the background to the granting of a surveillance warrant in 2016 on the Trump campaign member Carter Page.

The second review, set up by Barr in May and led by the US attorney John Durham, is looking at the origins of the Russia investigation, including whether there was bias against the Trump administration among senior officials in the security services.

Unlike Horowitz’s review, Durham’s has the power to convene a grand jury and subpoena people outside the government. The degree to which overseas intelligence agencies are dutybound to cooperate with the inquiry is unclear.

One UK government source said: “The intelligence relationship is so close that there is no need to pressurise the UK to cooperate.”

The Australian government has disclosed that it agreed formally in writing to cooperate, and it is known the former MI6 officer Christopher Steele cooperated extensively with Horowitz. He agreed to be interviewed by US justice department officials in London over his role in preparing a dossier on collusion between Russia and the Trump campaign. His evidence was in effect given under oath.

Durham has not been in touch with Steele, it is understood. 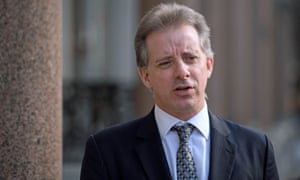 By coincidence, he was interviewed in the week that Trump conducted a state visit to the UK in June. Steele, through his lawyers, had been reluctant to be cross-examined, but was told the UK intelligence services had no objections. The interview focused on Steele’s knowledge of Russian interference efforts globally, his intelligence collection methods and his findings about Page, whom the FBI ultimately surveilled.

Steele had previously met a two-person FBI team from the office of Mueller, whose report on Russian interference in the 2016 election was published in April.

Around the same time as the most recent Steele interview, it was known that Trump was threatening to end the historically close cooperation between the British and the US intelligence services. That threat, first made in public by Pompeo in February, was linked to a US warning that it could not cooperate with an intelligence agency that allowed the Chinese-owned telecoms company Huawei access to UK 5G networks.

Trump withdrew the threat at a press conference with Theresa May after he met her and the then foreign secretary, Jeremy Hunt, privately to discuss the issue, despite there being no apparent change of position from the UK on Huawei. The president would have known by then that Steele was cooperating with his justice department inquiry.

Asked if Washington was ready to “impose limits on intelligence sharing”, the US president replied: “No, because we are going to have absolutely an agreement on Huawei and everything else. We have an incredible intelligence relationship and we will be able to work out any differences.”

Barr’s visit to Italy largely stemmed from claims by the former Trump aide George Papadopoulos that Italy holds the key to identifying the source of alleged smears against Trump in 2016.

Papadopoulos, briefly a member of the advisory committee for foreign policy in the Trump election campaign, told the then Australian high commissioner to the UK, Alexander Downer, in 2016 that Russia possessed emails hacked from Democratic party servers that were damaging to Clinton. Papadopoulos later claimed he was set up. 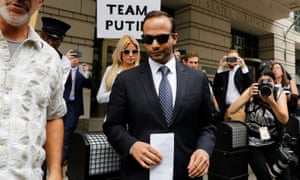 Downer passed the information to the FBI, helping prompt the investigation led by Mueller.

Papadopoulos has served a jail sentence for lying to the FBI about claims a Maltese academic, Joseph Mifsud, was the source of his information on Russia. He has said without evidence that Mifsud is an agent of the Italian secret service, and sought to entrap him. Mifsud has been missing for two years.

Papadopoulos had made a series of allegations about Downer’s motives. However, Downer is a conservative, a supporter of Brexit, and not seen as a man to try to deliberately undermine Trump for political purposes.

The UK Foreign Office said in a statement: “Investigations in the US are a matter for the US authorities. We won’t comment on the ongoing investigations.”

What precisely next for the Catalan of us in Spain?

I left Russia to escape Putin’s assault on reason