Northern Ireland would vote overwhelmingly in favour of remaining in the EU if a second referendum was held, a survey has found.

The survey comes as the Brexit secretary, David Davis, made a second flying visit to Northern Ireland on Sunday, meeting businesses as part of his cabinet research into the “maximum facilitation” option for a post-Brexit customs system.

In 2016, the region voted 56% to remain and 44% to leave, but support for leaving the bloc has fallen 13 points to 31%, undermining the Democratic Unionist party’s continued staunch backing for Brexit.

“The proportion wanting to remain has risen since the 2016 referendum as more people have become aware of the possible costs and inconveniences of leaving the EU, as citizens and as employees or employers,” said Brendan O’Leary, a professor of political science at Queen’s University Belfast.

The survey also showed significant levels of support for illegal or extreme protests against any north-south border checks, particularly among Catholics, who dominate the border communities.

The survey commissioned by researchers at Queen’s and funded by the UK in a Changing Europe thinktank, found that two years after the referendum support for remain had risen to 69% and leave had dropped to 31%. 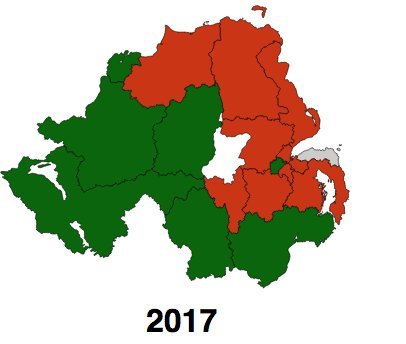 In the most comprehensive piece of research on attitudes to Brexit to date, it also found that there were strong expectations that north-south and east-west checks would attract protests that could “quickly deteriorate into violence”.

There was “substantial” support for Northern Ireland staying in the customs union and the single market, something to which the DUP is implacably opposed.

Support among Protestants to remain in the customs union and single market was marginally higher at 62% compared with 61% of Catholics.

The prospect of a no-deal exit and a hard border would play to Sinn Féin’s political aims of a united Ireland, with 53% of Catholics in favour if this was the outcome of the Brexit negotiations.

Both Catholics and Protestants voiced concern in the research over north-south border checks.

“I think the ceasefire would go,” said one Protestant, a leave supporter aged 45-59. “I could see it going the way it was before, with roads being closed off in various places because they can’t properly police it,” said a Protestant voter aged over 60 who supports remain.

“Protests would start peaceful and then if they don’t get anywhere they would just escalate it,” said a young Catholic remain voter.

Some were relaxed about cameras, saying “CCTV is everywhere in Northern Ireland”, but in in-depth discussion groups there was a “prevailing view that they would be vandalised”.

There was also a high level of support for peaceful protests against east-west checks and some significant support for illegal protests, with 9% of Protestants and 14% of Catholics supporting protests up to the level of roadblocks to stop traffic.

“What may surprise people is the extent to which Catholics oppose all borders within these islands,” said John Garry, a professor at Queen’s.

The Liberal Democrat Brexit spokesman, Tom Brake, said: “The surge of people in Northern Ireland who would now vote to remain in the EU also provides yet more evidence that there must be a vote on the final deal that provides the option of an exit from Brexit – particularly if that deal is a perilous one for Ireland.”

• This article was amended on 21 May 2018. An earlier version said that 51% of Catholics supported remaining in the customs union and single market. The survey found that figure to be 61%.