Kyriakos Mitsotakis has been sworn in as Greece’s new prime minister, a day after his centre-right New Democracy party won a landslide over leftist Syriza, which had been in power since 2015. 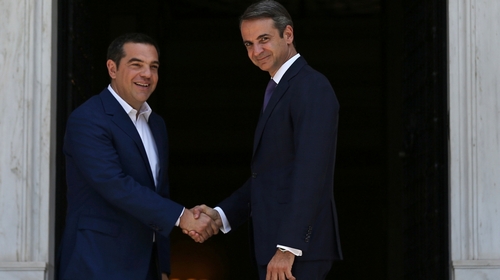 Mitsotakis, 51, arrived at the presidential palace for the official swearing-in ceremony accompanied by his wife and three children. He then headed to the prime minister’s office for a handover of duties and was expected to name his cabinet later in the day.

In his victory speech on Sunday evening, Mitsotakis vowed that Greece will “proudly” enter a post-bailout era of “jobs, security and growth”.

“A painful cycle has closed,” the 51-year-old said in a televised address, adding that Greece would “proudly raise its head again” on his watch.

The election result gave New Democracy an outright majority with 158 seats in the 300-member Greek parliament. This marks a significant shift for the crisis-hit country that was run for almost a decade by fragile coalitions of ideologically divergent parties united by their stance either in favour or against Greece’s bailout deals.

“I asked for a strong mandate to change Greece. You offered it generously,” Mitsotakis said in his victory speech. “From today, a difficult but beautiful fight begins.”

For his part, Tsipras said his party’s loss was “anything but a strategic defeat” following an election showing that was much stronger than expected.

“I can assure the Greek people that from the benches of the opposition we will be present to protect the interests of people of toil and creativity,” he said, after calling Mitsotakis to congratulate him on his victory.

The other parties that passed the three percent threshold to enter the Greek parliament were the centre-left Movement for Change (KINAL), at 8.10 percent (22 seats); the Greek Communist Party, at 5.3 percent (15 seats); newcomer Greek Solution, a far-right party, at 3.7 percent (10 seats); and MeRa 25, another recently formed party that is led by Yanis Varoufakis, a former Syriza finance minister, at 3.44 percent (nine seats).

Mitsotakis, the son of a former prime minister, campaigned on the promise of further reforms with a focus on fewer taxes, attracting investment and improving the job market.

The election came as Greece struggles to emerge from a nearly decade-long financial crisis that saw its economy plunge by a quarter and hundreds of thousands of mostly young people head abroad seeking better economic opportunities.

Syriza, which before the crisis was on the fringes of the country’s political landscape, stormed to power in January 2015, replacing a New Democracy-led government amid widespread discontent over years of tough fiscal measures imposed by Greece’s bailout creditors: the European Union and the International Monetary Fund.

But despite its promises to end austerity, the Syriza-led government seven months later caved in to the demands of its lenders, signing onto a third bailout deal and raising taxes further. Still, it managed to regain power in a snap election in September 2015 and form a coalition government with the nationalist Independent Greeks party.

Greece exited its last bailout in 2018 but is still under fiscal surveillance from its creditors. Its economy is expected to grow by around two percent this year but financial woes remain, including an unemployment rate of 18 percent, the eurozone’s highest.