Witnesses and monitoring groups reported widespread destruction across two residential blocks in the centre of Maarat al-Numan, with many people reportedly still buried under an apartment building as night fell. 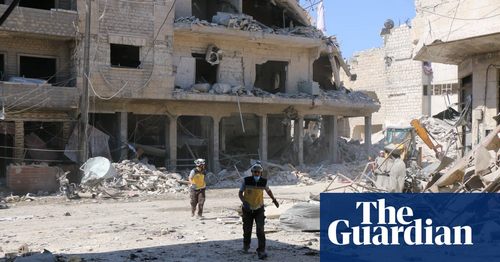 At least 33 people were killed and more than 100 wounded by an airstrike on a marketplace in northern Syria on Monday, as a Syrian and Russian bombing campaign against civilian sites in the rebel-held province intensified.

Rescue efforts were frequently stopped as jets circled the town in the south of Idlib province, the last corner of the country to remain in opposition hands after eight years of war. The past four months have taken an especially brutal toll across much of the province with the Russian-led bombing decimating civilian infrastructure.

Hospitals, market places, schools and centres for the displaced have been systematically targeted in towns and cities that remain in opposition hands. UN agencies and NGOs say at least two dozen hospitals and medical clinics have been destroyed by airstrikes, some hit multiple times until treating patients became impossible.

More than 3 million people are now crammed into Idlib province, many of them having fled fighting elsewhere in the country. Among them are extremist fighters and jihadists who have subverted the anti-Assad insurgency and lorded over civilian populations. The presence of jihadists has been used as a pretext by Russian and Syrian forces for the scale of the bombing in Idlib.

An air campaign, launched on 29 April, was supposed to have been in support of a ground war in southern Idlib, led by the Syrian Army. However, since the offensive began, regime forces have made little progress, even with total air superiority.

Rebuilding Aleppo: ‘We cannot preserve the place but we can save our memories’

The stagnant battle lines have reportedly led to frustration in Moscow, whose support for the Syrian leader, Bashar al-Assad, has remained resolute for the past five years, but has been tested as regime loyalists have failed to seize ground.

The fate of Idlib is central to the outcome of the war, which had killed more than 500,000 people when monitoring groups stopped counting three years ago. Since then, a fight that started as a push to oust Assad has morphed into multiple conflicts, led to the displacement of more than half the country’s population, who now have nowhere left to run, and drawn in neighbouring and regional states, who all want to shape the war’s aftermath in their interests.

Turkey, a significant backer of opposition groups in Idlib since the outbreak of anti-government clashes in mid-2011, has proposed a summit with Assad’s two main backers, Russia and Iran, in another attempt to douse the violence. Numerous multilateral peace initiatives have failed over recent years as one of modern history’s most intractable conflicts continued to ravage Syria and destabilise the region and beyond.

Ankara’s interests have increasingly been defined by its fears of Kurdish groups in northern Syria, which are allied to Kurds fighting an insurgency in south-eastern Turkey. A Turkish military operation in the town of Afrin early last year pushed Kurdish groups away from the border and Ankara now eyes the town of Tel Rifaat, where a significant Kurdish presence is seen as an obstacle to its ambitions of safeguarding several hundred miles of its border with Syria.

Splintered throughout much of the war and abandoned more recently by regional patrons, including Qatar, the UAE and Saudi Arabia, opposition groups can no longer win the war. Assad, though nominally in a winning position, owes his ascendancy to Moscow and Tehran, both of whom have been staking out their claims on postwar Syria as the war has slowly wound down.

Iran, which provided proxy ground forces that were instrumental in the recapture of Aleppo in late 2016, has not committed substantial forces to the Idlib front, and is increasingly at odds with Moscow over how to deal with the province.

Turkey, while acquiescing to a limited Russian-led operation in the south of Idlib province, has insisted it would not shoulder the burden of a massive inflow of refugees in the event of a coordinated ground push. Its calls for a fresh summit add weight to assessments in the region and Europe that the battlefront has reached a stalemate.

“We say to Assad and his friends that their obvious attempts to obliterate civilian life have failed this far and will fail again,” said a senior Turkish official. “They have lost in Idlib, and will continue to lose. They cannot bomb their way into victory. Only infamy.”

Smirking Trump jokes to Putin: don’t meddle in US election

Russia accuses YouTube of interfering in its sovereign affairs