Warsaw, Poland – On November 11, Warsaw’s streets brimmed with white-and-red flags and the glow of flares lit up the city. 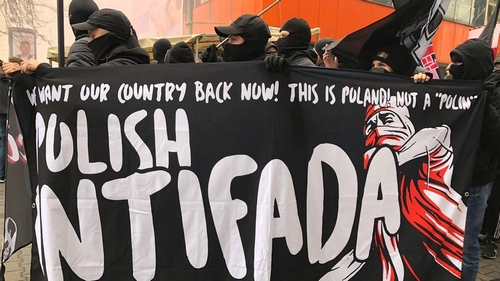 Each year, thousands of people celebrate Polish independence and the return of the country to the political map after 123 years of partitions, by attending the biggest patriotic gathering in Europe – the Independence March.

Organised by Polish nationalist groups, for the past 10 years the event has been the only space where the far-right, radical nationalists, but also common citizens, could gather to celebrate their national identity.

In recent years, racist, anti-immigrant and antiliberal rhetoric at the march has blended with Christian slogans in a peculiar hybrid of militant aesthetics and patriotic sentiments.

This year, the march was different. The usual bellicose atmosphere was toned down.

Speeches, while still truculent, instead of viciously targeting migrants, focused on protecting the Catholic values, tradition and Polish families against the perceived threat emerging from progressive ideologies – that is liberal sexual education, LGBT+ and the pro-choice movement.

Although the most radical groups were present, something had changed.

One of the reasons might be the increased infiltration and targeting of the most radical elements by the security services. Since 2018, the authorities have been heavily pushing against radical nationalist groups, such as the infamous Szturmowcy, which eventually dissolved in March this year.

Nationalist groups from abroad, which have long attended the march, were mostly absent.

In 2018, several foreign nationalists were not allowed to enter the country prior to the march in an attempt to thwart the internationalist character of the gathering.

In the October 2019 parliamentary elections, the Confederation Liberty and Independence party – a hybrid of radical free-market liberals and nationalists close to the Independence March circles, secured 6.8 percent of the vote.

For the first time, the far-right entered the Parliament of Poland, turning the movement from a fringe into a force with the potential to influence politics.

In his speech at the Independence March, Krzysztof Bosak, one of Confederation’s leaders, expounded his party’s vision for the country.

“The Independence March is a manifestation which embodies the Polish spirit. We want independent Poland, a Poland rooted in tradition, we want Poland which is committed to the faith of its ancestors, committed to Christian tradition,” he said on stage.

“We want Poland which is able to resist the pressures of the globalists, the pressures from the European Union and this is what unites us all, no matter which politicians we entrusted.”

The right is winning because it translates the very real experiences and problems of the voters, related to the political-economic system, into simple and understandable language of culture war.

Poland turning inward, controlling migration and rejecting liberal values – such as protecting rights of sexual minorities, is what Confederation – with its 11 members of parliament – will be trying to push through over the next parliamentary term.

Protecting the country from the Jewish “conspiracy” is also high on the nationalists’ agenda.

At the march on Monday, nationalist activists gathered signatures to support a bill against property restitution. The bill is designed to target the heirless properties that belonged to Jews and were appropriated by the Nazis during World War II.

While by law such property becomes a state asset, nationalists fear Jewish restitution organisations, with support from the United States government, could try to reclaim them.

While Confederation remains a fringe movement in the parliament, its entry into politics could have far-reaching consequences, especially for the ruling Law and Justice party.

“The party Law and Justice will be attacked by far-right ideas and will have to take a stance on them,” Ewa Maria Marciniak, director of the Institute of Political Science, University of Warsaw, told Al Jazeera.

“If there are any bills regarding LGBT rights or sexual minorities, Law and Justice won’t be able to swerve back and forth, they will have to unequivocally state which side they are on.”

Marciniak said Confederation’s electoral success is because some of their most controversial figures were hidden during the campaign as they prioritised the free market element.

But she believes the party will not hesitate from pushing forward their most radical ideas.

“In the public debate, they will be bringing up controversial issues, some of which we might not have dreamed of yet. For example, Confederation leader Grzegorz Braun says he is representing those Poles who do not want to live in a rainbow republic of deviants and migrants,” she said.

According to studies, seven percent of Poles said they would be willing to support far-right nationalist ideas if they had representation in Parliament.

While this might have just happened, the ongoing primacy of conservative nationalist forces in Polish politics, including the ruling Law and Justice, which has just secured its second consecutive victory, reflects something else.

“The right is winning because it translates the very real experiences and problems of the voters, related to the political-economic system, into simple and understandable language of culture war,” said Weronika Grzebalska, a sociologist and president of the Polish Gender Studies Association.

“Gender ideology” has become one of the main targets in the narrative battle, she said.

“The root causes of such support include structural issues rather than purely cultural – it is a pushback against the politics of submission to and imitation of the West, the growing individualism and abandonment of families by the state which has withdrawn after 1989.

“The right exploits these experiences and directs them against ‘gender’ as an enemy figure.”

As Grzebalska noted, Law and Justice is likely to remain the most important political force, but a lot will depend on their strategy.

The more the party resorts to the repertoire of the far right, the more redundant Confederation will become.

But if the party seeks to attract more centrist voters, which might be the case before the upcoming presidential election, Law and Justice’s more radical wing might like to shift closer towards the nationalists.

The role of the liberal and progressive forces now will be key.

“The normalisation of language and policies of the far right is a symptom of the crisis of political mainstream – its inefficiency, betrayed promises and inability to represent issues and experiences that are important to people,” Grzebalska said.

“As long as the opposition does not find another strong idea for Poland and Polishness, our political scene will be stuck in a toxic clinch between radical ‘pride of the semi-periphery’ and a progressive ‘imitation of the centre’.”