The noted political commentator Danny Dyer has been airing his views again, this time in a hugely contemporaneous snippet of EastEnders dialogue from last night, which referenced both England’s World Cup semi-final against Croatia on Wednesday, as well as the departure of David Davis as Brexit secretary. The suggestion of Dyer – or rather this character, Mick Carter – was for Gareth Southgate to get the job. 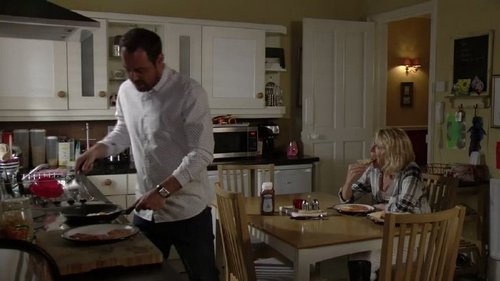 Today on #EastEnders. Quite literally. pic.twitter.com/CyVk68SY3I

Hello, this is Peter Walker, taking over from Jessica Elgot (for those who haven’t seen – Andrew Sparrow is elsewhere today).

The Commons is sitting from 11.30am, today, and kicks off with questions to the justice secretary, the ever-busy David Gauke. Away from the chamber, from 10.30am the home secretary, Sajid Javid, is being quizzed by the home affairs committee.

The ever-useful Labour whips Twitter feed says there are no ministerial statements today – but isn’t ruling out other missives from ministers.

There are no oral ministerial statements today. Doesn’t rule out any letters from Ministers later…

He is showing photographers the NHS pin badge on his lapel – the same as the one worn every day by his predecessor Jeremy Hunt. No word on whether it is the same badge…

Here are a few more cabinet ministers arriving for the meeting at Downing Street – including a very jolly looking Jeremy Hunt, the new foreign secretary.

The former defence secretary Michael Fallon has been speaking on the Today programme. He hints he does not think the resignations from the cabinet will be fatal.

He says Johnson’s resignation letter that “the Brexit dream is dying” is not the reality.

He uses this phrase, the dream is over, and dreaming is good for everyone but in the real world, the vast bulk of trade and manufactured goods, whether you like it or not… is at the moment with that huge common market on our doorstep.

He says there is “no alternative” apart from ensuring the UK has a smooth entry to the European market after Brexit.

Gauke does not rule out making further concessions. He says it is a negotiation.

It requires compromises from both sides… What we are doing is taking the initiative.

He says the job of cabinet ministers now is to explain the deal to parliamentary colleagues and European counterparts.

Gauke suggests a ‘no deal’ scenario is not attractive but cannot be ruled out.

What I would say to my colleagues, for those who think this is a pain-free solution we can ride over easily is that no deal will have a negative impact on our constituents, the British people.

Gauke says businesses have repeatedly made the case for frictionless trade with the EU and warning about the significant economic impact if that happens. That will not happen under this plan, he says.

He says that if people do not like this proposal – “what is their alternative?”

It is all very well for people to say ‘I wouldn’t do this’ but remember the three options in front of us are the EEA, which doesn’t respect the referendum result, a free trade agreement, which leaves Northern Ireland in a different position which is very threatening to the union or a no deal. A no deal on bad terms as well.

If that is the situation we are in, it is necessary for the UK government to come forward with another proposal.

Gauke says it has long been the position of the government that Brexit should not undercut employment or environment regulation.

He says he does not know which regulation Johnson is specifically objecting to.

Gauke says regulation for goods has not changed significantly in recent years, which is not the case with services. The Chequers deal proposes a UK-EU free trade area for goods, by using a “common rulebook” with the EU, but accepts there may be new restrictions on services.

George Osborne and his chief of staff Rupert Harrison used to famously say “Uncork the Gauke” when they had a tricky policy to defend and send out David Gauke, then a Treasury minister, on the airwaves and to the Commons.

After the drama of yesterday, Number 10 has decided to follow their advice and has un-corked the now Justice secretary.

He says he was surprised by the resignations given the “convivial” atmosphere of Chequers on Friday.

Clearly David and Boris have reached their conclusions that they couldn’t support the policy. I think it is right the cabinet backs the prime minister and speaks with one voice and if people don’t do that then clearly the honourable thing to do is go.

He says he does not accept Johnson’s verdict that UK is becoming a colony. He says parliament will still have a vote on whether to accept future regulation.

Justice secretary David Gauke is about to speak on BBC Radio 4 Today programme.

Presenter John Humphrys reveals first that Boris Johnson turned down the invitation to appear on the programme this morning in the main 8.10 slot, unlike David Davis who was on the show on Monday morning. He speculates that is because Johnson may not have ruled out a run for the leadership, unlike Davis, who explicitly did.

Here are how some of the papers view the departure of Boris Johnson and the future of May’s Brexit plan.

The Guardian says it is “good riddance to a national embarrassment.”

Mr Johnson is the most overrated politician in Britain, especially by himself. He was an embarrassingly useless foreign secretary. He diminished Britain’s standing in the world and he diminished his own reputation by the way he played his role, not least by his praise for Donald Trump. He was simply not up to the job. But Mr Johnson does not do serious. He does self-interest. The British government is better off without him.

The Times is equally damning about Johnson’s tenure.

This is a resignation that has been coming for some time. Few will be surprised. Mr Johnson has been insubordinate for a while, seeming to dare Theresa May to sack him. He has shown no inclination to compromise on anything while at no point offering a constructive suggestion about what the government might feasibly do.

If his resignation does not trigger serious consequences for the government’s future, Mr Johnson’s departure will be greeted warmly in international capitals, where he has not been taken at all seriously.

It is impossible to see his resignation through any prism other than his own overweening ambition.

Good Riddance, Boris Johnson. The resignation of Britain’s foreign secretary could make it easier for Prime Minister Theresa May to reach a more reasonable agreement on Brexit.

If her government weathers the resulting storm, their departures could help resolve the tortuous divorce negotiations with the European Union, which are approaching crucial deadlines.

Only the Telegraph defends its former columnist, saying May must rethink.

In our view, she should think again. The Chequers deal is a bad set of proposals that will encourage the EU to demand yet more concessions.

Mrs May continues to assert that the UK will be leaving the customs union and the single market; yet the Chequers deal means we will be retaining elements of both.

Mr Johnson says we will be a colony of the EU. Are Conservative MPs happy with that? If not, what do they propose to do about it?

Even the Sun says there is no alternative plan on the table.

For all the justified rage of Brexit-backing Tories, which The Sun shares, we don’t hear a strategy that could win a vote in a Remain-dominated ­Parliament or secure a deal in Brussels.

They may vote down Mrs May’s – or even topple her. How will they stop Remainers from signing us up to the Customs Union, an even greater disaster for Brexit?

Boris’s resignation letter said the Government strategy was ‘suffocated by needless self-doubt’. Absolutely bang on – but is there a Plan B for Boris?

Labour leader Tom Watson is on BBC Radio 4 Today. He says Labour want to work to get the best deal for the country.

Is the current meltdown in the government good for anyone? Obviously electorally it might help my party but we want a good deal because families out there require parliament to vote on a good deal.

He is scathing about Boris Johnson saying he has “got a career ahead of him on ‘love yourself island.”

Presenter John Humphrys says the name of the programme is Love Island, but Watson said it should be a new programme.

He’s the only politician in history who posed to signing his own resignation letter.

Watson says Labour is clear about its different set of priorities and its tests for the deal, though he confesses he may not be able to remember them all.

He says it is conceivable that there is “no majority in parliament for any Brexit deal” and says Labour has not ruled out a second referendum.

It is highly, highly, highly unlikely we would support a people’s vote but we haven’t taken that off the table because there are a rare set of circumstances where Parliament just can’t make a decision. And so you keep your options open.

‘Russians have special status’: politics and mining mix in Guinea