The death toll from Tuesday’s quake rose to 30 as rescue workers dug through the remains of the four-storey house in the Adriatic port city of Durres.

Italian rescue teams were trying on Wednesday to save six family members, including twin toddlers, trapped under rubble when their house collapsed after Albania’s worst earthquake in decades.

Nine members of the Lala family were initially trapped but a boy of 17 was pulled out alive on Tuesday and the bodies of a 79-year-old woman and an eight-year-old girl have been recovered.

The rescue workers, watched by relatives and the twins’ father, believe two girls aged 18 months, two boys of six and seven, a 16-year-old girl and a disabled man of 52 are still under the rubble.

Teams of soldiers, police and emergency workers sifted through the debris of shredded apartment blocks and hotels in towns near Albania’s northwest Adriatic coast, close to the epicentre of the 6.4-magnitude earthquake that rattled the country.

Most of those found dead were pulled from rubble in the coastal city of Durres and Thumane, a town north of the capital, Tirana.

Albania has been hit by the worst earthquake in decades.

At least 21 were killed and hundreds injured in the 6.4-magnitude earthquake. Rescue workers continue to search for survivors. pic.twitter.com/EVJo2sL5ie

In neighbouring Kurbin, a man in his 50s died in the morning after jumping from his building. Another perished in a car accident after the earthquake tore open parts of the road, the defence ministry said.

In Thumane, locals watching emergency workers comb over a collapsed building shouted the names of their loved ones still inside: “Mira!”, “Ariela!”, “Selvije!”.

Dulejman Kolaveri, a man in his 50s in Thumane, told AFP news agency he feared his 70-year-old mother and six-year-old niece were trapped inside the five-storey apartment because they lived on the top floor.

“I don’t know if they are dead or alive. I’m afraid of their fate… only God knows,” he said with trembling hands. 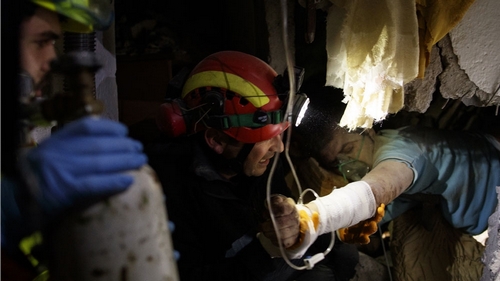 There were also brief bursts of joy during the day as rescuers delicately extracted survivors.

One thin, middle-aged man covered in a film of grey dust was seen being carried out of the rubble on a stretcher in Thumane.

In Durres, onlookers cheered “Bravo!” as a team used ropes to rescue a young man from the wreckage of a toppled seaside hotel in a two-hour operation.

Afraid to return home after a series of powerful aftershocks, hundreds of people in Durres took shelter for the night in tents set up in the city’s football stadium.

Al Jazeera’s Milica Marinovic, reporting from Albania, said some people were frustrated with the government’s response.

“Many are dissatisfied with what they call a poor reaction from the government. They say they lack food and clothes,” she said.

“The mayor of Drac municipality has described the situation as chaotic. He said that only in Drac more than 30 buildings and 170 houses were demolished,” she added.

“He said they are receiving enough supplies of food for people but what will they really need in future is money to rebuild all the demolished houses and situate the people who have lost their homes.”

She also said the Albanian government had offered to pay for hotel stays for citizens until their houses could be rebuilt, so they would not be forced to spend the winter in the streets.

The health ministry said that more than 600 people have received first aid for injuries, mostly minor.

During a visit to victims in a hospital in Tirana, Prime Minister Edi Rama told local media that Wednesday would be a national “day of mourning”.

“We have lost human lives, we have also saved a lot of lives,” he said. 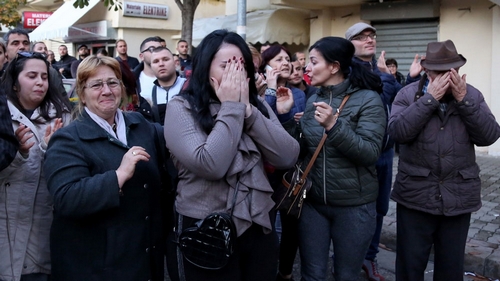 About 300 local soldiers and 1,900 police were sent to Durres and Thumane to assist with the rescue efforts, according to authorities.

The quake was centred 30km (19 miles) west of Tirana, the US Geological Survey (USGS) said, and was also felt in several neighbouring countries and beyond, including in the southern Italian region of Puglia across the Adriatic Sea from Albania.

Hours later, a magnitude-5.4 earthquake rattled Bosnia, with an epicentre 75km (45 miles) south of the capital, Sarajevo, monitors said. There were no reports of injuries.

The Balkan Peninsula lies near the fault line of two large tectonic plates – the African and Eurasian – and earthquakes are frequent. 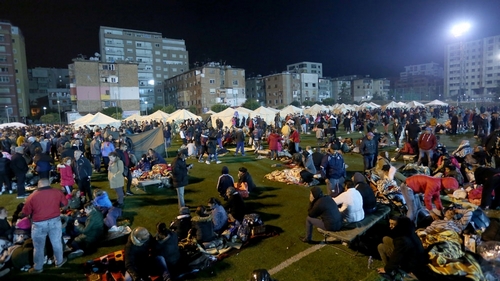