Ukraine has sworn in comedian Volodymyr Zelensky as the war-torn country’s sixth president. 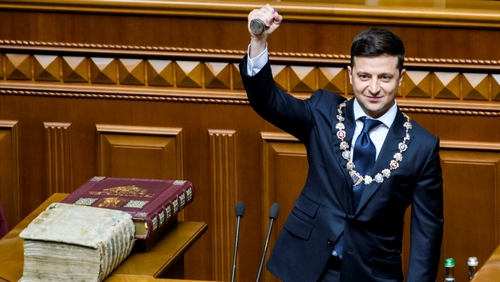 The inauguration ceremony on Monday came more than two weeks earlier than expected following the parliament’s approval of the date requested by Zelensky.

The 41-year-old announced dissolution of the parliament in his speech, a strategic move to bring the October 27 parliamentary elections forward to boost his party’s chances of securing a majority at the height of his popularity.

In his speech, Zelensky attacked the cabinet of ministers, saying he did not understand why they kept saying they could not do much to change the situation in the country.

“You can take a paper, a pen and free up your space for those who will think about the next generation instead of the next elections. I think people will appreciate that,” he said.

A resignation letter of Defence Minister Stepan Poltorak addressed to Zelensky appeared on the minister’s official website shortly after the speech. It follows the resignation of Foreign Minister Pavlo Klimkin and the head of the National Security Council Oleksandr Turchynov.

Zelensky, who more than three years ago played a corruption-busting president in a popular TV sitcom that shaped his image during the real-life election campaign, called on Ukrainians to share the responsibility for the country’s future.

“From today, each of us is responsible for Ukraine, which we leave to our children. Each of us died in the Donbass, every day we lose each of us. Each of us is a migrant, a foreign worker,” said the president.

“But we will overcome all this. We are all Ukrainians. There are no big or smaller ones. Each of us is Ukrainian. From Uzhgorod to Lugansk, from Chernigov to Simferopol, in Lviv, Kharkov, Donetsk, Dnipro and Odessa.”

The president also said he would start a dialogue with Russia only after Moscow releases of the prisoners of war taken from Donbass region – a conflict zone.

Yaroslav Yurchyshyn, expert in advocacy and fight with corruption, told Al Jazeera that Zelensky’s first priority for tackling corruption that is ailing the country was to change the general prosecutor.

But Yurchyshyn said he was not convinced that Zelensky would tackle corruption in ernest, pointing to his ties to oligarch Igor Kolomoisky who returned to Ukraine from self-imposed exile in Israel days before the inauguration.

Kolomoisky, whose bank was nationalised under the now-former president, Petro Poroshenko, over alleged money laundering, poses the biggest challenge to Zelensky’s presidential success, according to Yurchyshyn.

“[Kolomoisky’s return] is the main challenge because his presence in the country means our judges are open to help him to return PrivatBank and compensation money for the privatisation. And we will not only lose money but also have problems with the International Monetary Fund,” he said.

“It all depends on Zelensky. If he is a puppet of Kolomoisky, we will lose a lot.”

Assessing Zelensky’s inauguration speech, Yurchyshyn said: “It was quite populistic, but it was in general the agenda that our society has. People gathered outside the parliament were very happy with what they heard.”

The ethnic Russian separatists seized parts of Donbass, an area in east Ukraine which includes Luhansk and Donetsk regions.

The conflict has killed more than 13,000 people.

Zelensky defeated Poroshenko, in the second round of presidential elections on April 21 with 73 percent of the votes.