Temperatures are rising across several countries in Western Europe, with many cities expecting annual highs and a few anticipating to break all-time records. 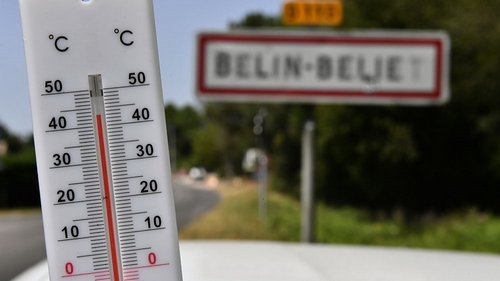 The temperature measures 43 Celsius in the village of Belin-Beliet, France. Heat will continue through Thursday before storms and more moderate air pushes in before the weekend George Gobet/AFP

It’s the second significant heatwave of the year for Europe, but this promises to be much shorter.

A dome of high pressure, commonly referred to as an Omega Block because of its shape reminding the Greek letter, has set up over the western and northern parts of Europe.

This high pressure raises temperatures by putting a cap on the atmosphere, which allows plenty of solar radiation in during the day but little out in the overnight hours, letting heat continue to build daily.

On Tuesday, the temperatures were already on the rise, with many cities across western France hitting 40 Celsius and above – the highest temperature was recorded in Brive, reaching an afternoon high of 42.1C.

Temperatures are expected to peak on Thursday and several major cities could break all-time records.

London is expected to reach 38C or higher on Thursday. This would break the July record of 36.7C and possibly break the all-time record of 38.5C.

Paris is likely to also smash records with an expected high of 42C, well above the previous record set in 1947.

But unlike the June heatwave that lasted for weeks across many parts in the west and north of Europe, this week’s heat will begin to break on Friday with temperatures quickly falling into the weekend as a significant change of air-mass moves in from the Atlantic.

Albania is not ready to join the EU