Warsaw, Poland – Synthos SA, a chemical company owned by Poland’s richest man, has announced a plan to build a small reactor to power its plant, most likely in Oswiecim in southern Poland. 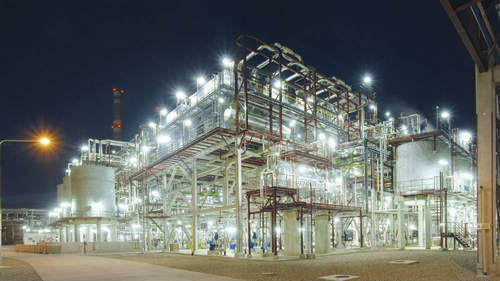 The company, which is Europe’s second-largest producer of synthetic rubber, has signed a non-binding agreement for a joint venture with US-based GE Hitachi Nuclear Energy (GEH).

For decades, Polish governments have mulled over adding nuclear power to the country’s energy mix. According to the government’s current energy outlook, Poland’s first atomic plant is expected to come online in 2033, a date which experts consider plausible.

However, if completed as planned in 2027, the Synthos private reactor could be Poland’s first.

Energy prices are on the rise in Poland. In 2018, the wholesale price of electricity soared by 70 percent, one of the fastest one-year growth rates in Europe.

“The energy component of product costs is growing. Especially if electrical energy prices increase, as it seems they will,” Michal Solowow, owner of Synthos, was quoted when speaking about the investment.

“Nuclear energy is the only rational alternative to produce cheap energy in an ecological and safe way, at a price comparable to coal,” he said.

Synthos mainly relies on coal for its energy, but will have to cut off some of its sources in 2024 and 2028, and wants to limit investments into its old furnaces.

“Irrespective of the laws or ecological motivations, we are compelled by economic sense. In the future, CO2 emissions permits will only become more expensive,” added Solowow.

Poland gets 80 percent of its energy mix from burning coal, leaving the country vulnerable to changes in the price of carbon permits under the EU’s emissions trading scheme. In 2017, the price of a tonne of carbon dioxide oscillated around $5. It now stands at $27.40.

In June, Poland – along with Estonia, Hungary and the Czech Republic – stalled France’s push to commit the EU to a 2050 net-zero emissions target date.

But anticipating the seemingly inevitable hit in the future, many companies here are now exploring low-carbon options.

Not so many big fans

Some analysts are calling Synthos’ declaration premature. The company is eyeing a Small Modular Reactor (SMR), a technology which is yet to be commercialised.

An SMR plant can produce 300 megawatts, around a tenth of a large conventional reactor’s output. The mini-reactors can be made by the dozen in factories, in theory making their implementation faster and cheaper.

GE Hitachi claims that miniature reactors are up to 60 percent cheaper to build than regular ones, and can compete with gas-fired plants and renewable sources. Synthos expects its capital expenditure to be below $1 billion.

“The promise of an SMR is in the lower price compared with a conventional nuclear plant, but that assumes that reactors will be rolling off an assembly line. For that to happen there would need to be enough demand to bring down the price.”

Many nuclear projects, such as Britain’s Hinkley Point C, France’s Flamanville and Finland’s Olkiluoto 3, have incurred lengthy delays and costs have spiralled.

Moreover, according to a spokesperson from the Ministry of Energy, Polish law requires that a solution be successfully rolled-out in another country first, which may slow the idea down.

Tomaszewski suggests it could also be a way of pressuring the anti-nuclear lobby in Europe to support continuing gas supplies in the energy mix. Or the announcement could merely be a publicity stunt to promote the company’s energy divestments, suggested Pawel Szypulski of Greenpeace.

Yet another hurdle for Synthos will be securing popular approval in the town of Oswiecim, known in English as Auschwitz.

Many here are on board, citing cleaner energy, new jobs and more money in the small town’s coffers. “Oswiecim is not a tourist town, and it has to keep developing. All investments are welcome, even those that are controversial,” said Marek Kuwik, who was born in Oswiecim and still lives in the town.

Others are concerned, and for a number of reasons.

Bartłomiej Gieregowski, a 38-year-old mechanic who in his own words “grew up in the shadow of the Synthos plant” told Al Jazeera that, based on reports of cancerogenic particles found in the area, he is uneasy about further industrial investments.

Jan Gisterek, a real estate agent in Oswiecim, is worried that seismic shocks from nearby mines could make the reactor dangerous.

Albert Bartosz, the former head of the commune of Oswiecim, invites caution. The company would have to secure permission from the EU and national administrators, as well as tacit support from the local community.

More ways of digging for money

Many Polish companies have their own power plants to hedge against fluctuations in energy prices and supply.

PKN Orlen, the state-owned petrol giant, has two of its own electrical power and heating plants in Płock and Wloclawek, together generating 4.5 percent of the electrical energy in Poland.

In 2018, Mercedes Benz signed the first corporate renewable PPA in Poland and in the automotive sector in Europe. It will soon open its engine factory in Jawor in the south-west of Poland, which will be fully powered by biomass and wind from a farm 12km away.

“There will be more PPAs – that’s the future direction,” Tomaszewski told Al Jazeera.

However, “as the price of renewables continues to drop and energy storage becomes more widespread, renewable fuels could soon outcompete all else”, he added.

“We have energy sources which are both clean and accessible, like the sun and wind,” he said. “Invoking a project which is still in its testing phase keeps us in the sphere of debates and declarations.”

Russia and Syria step up airstrikes against civilians in Idlib