That gesture came on Thursday, as Ukraine’s president held what his office called a “marathon” press conference lasting more than 14 hours, with 300 journalists in attendance, which looked more like a forced march by the end. 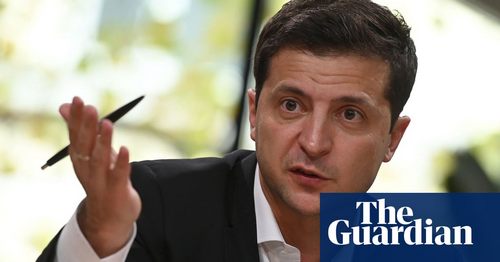 Ever since reports of a telephone call with Donald Trump emerged last month, the news has been bad for the Ukrainian president, Volodymyr Zelenskiy.

In the space of a few weeks, he has faced protests over a controversial peace deal in Ukraine’s south-east, a lacklustre visit from the IMF and the resignation of a reformist cabinet member.

What was needed, his administration decided, was a grand gesture to recapture the narrative of a young, outsider president with a 70 per cent approval rating.

Zelenskiy took questions at Kyiv food market in the refurbished Arsenal weapons factory, where he sat at a broad table next to a stall advertising “oysters and sparkling”.

The venue was carefully chosen to signal the administration’s openness. Eight hours into the event, a man in a vest bearing the word “expert” presented Zelenskiy with an award for holding the world’s longest press conference, an honour previously held by the leader of Belarus.

Over the course of the day, Zelenskiy told shifts of journalists he had not been blackmailed by Trump in their phone call on 25 July and did not know US military aid had been delayed at the time.

A White House summary of the call showed Trump asked Zelenskiy to investigate business dealings by the family of his political rival Joe Biden in Ukraine, as well as claims the former vice-president had a Ukrainian prosecutor fired for looking into a company where his son worked. No evidence has shown Biden was motivated by his son’s work.

What is the Trump-Ukraine whistleblower scandal?

On 25 July, US president Donald Trump called Ukraine’s president Volodymyr Zelenskiy. During the course of the call he reportedly asked the Ukrainian leader eight times to investigate former US vice-president Joe Biden and Biden’s son Hunter. It is additionally reported that Trump ordered his staff to withhold nearly $400m in aid to Ukraine days before the call took place.

Biden is one of the frontrunners to win the Democratic nomination and take on Trump in the 2020 presidential election. Trump confirmed he discussed the Bidens with Zelenskiy, and accused the pair – without offering any evidence – of corruption.

A US intelligence community whistleblower filed a report after becoming alarmed at Trump’s behaviour in the matter. The White House refused to release the substance of the whistleblower complaint, setting up a confrontation with Congress over the release of information. Complaints of this nature are usually reported to Congress within seven days.

Trump’s personal lawyer, former New York mayor Rudy Giuliani, has admitted asking the Ukrainians to investigate the Bidens. It is illegal for a political campaign to accept a “thing of value” from a foreign government. Democrats say an investigation into a political opponent – for which Trump appears to have been pushing – would amount to a thing of value.

Zelenskiy said he was ready to investigate Ukraine’s role in the 2016 US elections if served with an official request by the US. He also said he knew he had needed to secure a meeting with Trump, saying US relations with Ukraine were “tired” and the Americans “wanted to know where their money had gone”.

But Zelenskiy’s main message to the US was: leave us out of it.

“Choose your own president yourself,” Zelenskiy told American reporters in an attempt to stake neutral ground in a Democratic impeachment inquiry. “And if possible, we ask you not to influence elections in a free Ukraine.”

Down below, journalists ate lunch at stalls with names such as Bali Bowl and Milk Bar as protesters and petitioners occasionally shouted up to Zelenskiy. One, the mother of a Ukrainian lawyer stabbed to death in 2017, demanded a proper investigation into the murder, and justice for her daughter.

Over the hours of questioning, Zelenskiy dodged queries about his relationship with the billionaire Ihor Kolomoisky, and called ending the war with Russian-backed separatists in south-east Ukraine the most important goal of his presidency.

The spectacle recalled a hallmark of another politician: Vladimir Putin’s marathon press conferences and Q&A sessions, controlled but flashy affairs primarily designed to show the Russian president’s transparency without putting him in danger of embarrassing himself.

Zelenskiy also said he would have to meet Putin face to face to end the war, which would be deeply controversial in political circles in Kyiv.

“No one talks about the meeting in person because everyone is against it,” he said. “However, the meeting must be held if we want the war to end.” No date had been discussed, Zelenskiy added.

The event was a tacit rebuttal to journalists who have complained Zelenskiy’s administration has been opaque, and have accused his press secretary of bodychecking or physically pulling them away from the president.

But the effect was not always convincing. In an early round of questioning, Zelenskiy turned on a reporter for the Kyiv magazine Novoye Vremya, asking why a key investor was from the Czech Republic and not a Ukrainian citizen.

“I’ve always said that the mass media should be independent and Ukrainian,” Zelenskiy said in his remarks. The reporter later shot back: “I think it’s better that media is owned by an EU citizen than corrupt oligarchs.”