Before the gates the Pokrovsky monastery lazily walks beggar. “Bring on the bread, Christ God ask,” demanding he speaks hoarsely, seeing the parishioners. The man quickly opens a sweatshirt, exposing numerous holes in the shirt, and if by chance it overshadows the passage to the temple, with a frowning glance at passers-by.

“Are you so dressed up, severely drawn to the poor sister Maria. – Aren’t we clothed you? What’s with the clothes?”. And have a calm tone telling the man to wait: now he will make some food.

The Alexander Nevsky monastery looks like can imagine the real convent of secular people. Here everything is streamlined and clearly organized. On-site resides more than 40 nuns, all the free time they devote to prayer and obedience. Day at the sisters begins at 6:00 with prayer in the temple. Then the nuns start to work or, as they say here, to fulfill the obedience. The main the monastery, the abbess, without her blessings, the sisters are trying to do nothing.

The prioress Hope – power of a woman of 60. Says little more nods and agrees, says mother Mary. “I look at sister, what age, what condition, to what it tends, – says Nadezhda. – You have to pray, to ask: Lord, where am I this sister to send? What kind of work. Sometimes I’m asked, what did you do to the monastery. To find out the interests and capabilities”.

Preparation of the table for the sisters

The sisters are immediately negotiated at the monastery do not accept people who “flee from difficulties”, so many have to refuse obedience. “First, ask yourself, if a baptized person goes does the Church, how long ago was baptized, confess? Take communion? lists mother Mary. – About marital status, ask. Because you may find that the woman just with her husband got into a fight and decided not to leave her monastery. Those who run away from problems, we are trying to reason with”. However, every year the monastery comes one or two novices, which is worth taking. The novice must come to the temple “out of the abundance of worldly life”.

The bell tower of the monastery

About why came to the monastery, the sisters do not like to talk: here it’s just not accepted. But some stories without names still tell us. For example, it came to 17-year-old girl and her grandmother. Grandma wanted to take the vows, the granddaughter thought just to see the monastery. The month they lived together. Grandma realized that her hard in the monastery and went home, and granddaughter stayed in a few years I took vows.

The sisters do not hide the fact that sometimes parents “pulled from the convent” children. “Then one girl was a sad story, recalls mother Maria. – It is a place in life and found that in a General way is not yet decided. Hospitals went. The parents later regretted”.

According to the mother superior, well, when entering a monastery is the parental blessing. But if parents are against it – then you can disobey them. “You know sister, that in ten years the blessed mother – explains mother Mary. – She came here thirty years, my mother was against it. Sister left, took the blessing from his father. Ten years later mom still took conocco and blessed daughter. I think moms want to make sure that my daughters do well here. That’s all.”

While the sisters stress that they will not take to the convent and married women with young children, because the first task is to raise and educate their children, and then “working for your soul”. Almost always take divorced older women and young girls – if they are really ready to leave worldly pleasures.

According to the sisters in the monastery there are novices with higher education, people who had “prospects in the world.” “A man comes to the monastery from a surplus of worldly life, – said the abbess. – When he wants something higher. In the world they are bored. Life in the monastery she’s a much happier, much richer.”

Before taking his vows, that is, before taking the vows, the sister may a few years to go novices. Many of them leave the monastery themselves – the nuns are laughing, what input and output they have open to come and go, everyone can. And how can you keep a man if he doesn’t want to?

But if a sister took the veil, received the monastic orders, and asks to leave – it is a tragedy for the entire monastery. For such care is necessary to obtain the blessing. “We’re like family. In the family the mother and sisters. If one goes, of course, others are also grieving, we are sorry sister,” says mother Mary.

The nun explains that this is usually a situation of temptation. For example, the disease. “If my sister’s sick, she thinks that she is burden for all. Here’s the reason – she laments. We begin to speak: Yes, to do the heavy work you can’t. But you can pray, it is also work great.” Remember, in the family of the sister’s mother was in the hospital. Brother and sister began to speak to the nun: “Come to care for her mother, we have work to do, and you do nothing”. Sister did not go. And then it turned out that relatives cared for safely mom.

For lunch in the dining room fit the nun. Three girls especially for the guests sing the Psalms – they usually do only in the temple and on holidays. On the table – milk, eggs, and appetizer of fish. “Meat we don’t feed them, we don’t eat meat, only fish,” the laughing nun.

During the meal, usually one of the novices read a prayer. Mother Maria recognizes that once a year, on Easter, while eating include songs on the recorder. “Usually it’s the carols. Know what wonderful Christmas carols are there? So we do all sing, but once a year, can afford to listen,” says the mother.

The dining room in the monastery

The young nun quietly whispering among themselves. The mother superior pulls a pretty girl 20 years due to the loud laughter. But to answer the journalist’s questions the sisters refuse. Only modest smile and look away to the side.

At the table, more talking to mother Maria: recalls the legend about St. Xenia, talks about the economy. The abbess smiles quietly and stealthily puts food in the dish talkative mother – I think she is afraid that she will not have time to eat.

After the meal, the nuns proceed to Affairs – someone stays to wash the dishes, someone continues to cook dinner, someone goes into rizno, in the garden or in the temple. “The day ends late, explains mother Mary. – We are in the eleventh hour of the evening the cells are separating. The sisters can read, can pray or dress hemming, for example. Everyone minds their own business”.

According to mother, sister sometimes allow myself to read not only the gospel and the lives of the saints, but modern priestly prose.

The monastery is home for many cats

The abbess blesses mother Mary for the interview and out of business. Mother walks around the yard of the temple, telling the story of the monastery. About myself mom tells me reluctantly. To the monastery he worked at the center for the disabled, care for the wheelchair. She is originally from Central Russia. “I’m here for a long time – smiling mother Mary. – Learned about the temple, about the monastery, the abbess found out. Wrote a letter. And how I show up? Before accepting, we’re having a conversation with people. A man from afar, of course, he first writes. The people who met with the mother superior, said she was a very good spiritual man. I wanted to take obedience under her command”.

Cells, where the rest of the nuns

Passing the cells, where they live, sisters, mother Maria said that no one is allowed there, even as an exception. “Why did I have to put in your apartment? This is my personal space,” said the nun in a tone that brooked no argument.

However, the big secret in the cell, according to mother, no. Usually in the room are two or three beds for three or two nuns. Each has its own shelf of books and an icon corner. In the center of the room stands a wardrobe.

The nun shows dug up the plantation – soon the beds will appear sprouts strawberries, cabbage, zucchini and potatoes. Beyond the garden the sisters caring for yourself, several of the nuns went to the city to learn to ride on the tractor. Only themselves to repair the equipment the sisters do not know how.

Outside of the monastery many sisters have to go to the pharmacy, the hospital, the Bank, the store and the post office. Some nuns have cell phones. “But only those they really need to communicate – smiling mother Mary. For people like me. Who is responsible for the communication with the outside world. I drive tours, tell us about the monastery. Everything and nothing – the easiest obedience.”

The coop in the monastery

Mother explained that in the monastery all the sisters work for each other, but feed themselves – they have their own garden and farm.

“The monastery is a place of prayer, – says the nun. And the rest of the obedience involved so that there is more time for prayer. The sisters serve each other and God, and the temple, and the people for whom you pray.”

Mother gets journalists to the farm and introduces him to a sister who brings obedience on the farm. “And I’m a purely urban dwellers, says the nun. – And I was sent here to carry out their obedience. It was terrible. But it is interesting. And the cattle were afraid of me, but somehow it went to me.”

“And I, too, first obedience was in the barn – immediately recalls mother Maria. – And I, too urban, the cows never saw. But you know what happened? My father said you work in a monastery in the barn. I don’t believe, they are also not familiar with the abbess, so how could he have known this? Came here, met with the mother superior and she gave obedience to the barn. And I’m not surprised and not scared.”

“You have to be offended, we all can show you. And sisters don’t want to talk, but it is their right to force I can not – quietly adds to mother Mary. – Probably not why you came to us. And on a conversation with you, I also took the blessing, all this has long been. I want all to take the blessing.”

A preacher with a guitar: the story of the city’s only priest, singing songs

He loves fishing, says unbelievers are sick and sees no bad in expensive cars Ministers of the ROC 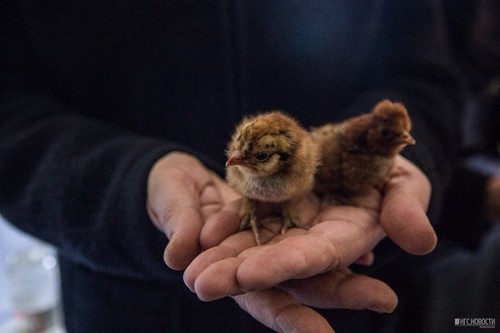 Test drive: hippos in the city

Tanya and her chocolate house