The gradual increase in prices was recorded by statistics – according to Rosstat, the price of fuel at the Russian gas stations rise for five consecutive weeks. Only in the last two weeks gasoline has increased in value by 0.4%, while four months of this year rose 1.8%. Diesel fuel for the time went up by 2.7%.

The sharp increase in prices for gasoline is noted not only in Novosibirsk, but across the country. Experts in the oil industry in saying that this is all because of the collusion of wholesale companies, which stretches at least since the end of last year. Then, in Russia recorded the highest wholesale price of fuel.

“All oil companies (we have an oligopoly on the wholesale market) simultaneously in the same amount is the increase in wholesale prices, – said the head of the Association of independent traders “Siberia-petroleum products” Julia Zolotovsky.

– In fact it is a cartel, when several companies combined to increase wholesale prices”.

According to her, over the past five weeks, the wholesale price of fuel has increased by more than 10 thousand rubles per ton. At gas station prices rose about 20-30 cents per liter every week and eventually increased by almost ruble. According to experts, it is not even close to covering the increase, which occurred in the opt.

Over the past few days in NSO have been several price hikes of gasoline, though from January through March they were at the same level

“Here two options are possible. Either increase the retail price – but it is clear that no controls will not raise retail prices or lower wholesale. But is the profit of the oil companies, and it paid all the taxes. We have 60% of the budget consists of tax deductions oil companies,” says Julia Zolotovsky. She noted that there is no regulator in wholesale prices: “For eight years this situation for the second time. Last time is so enormous increase was in 2011. Was to increase containment of the retail price, but more than three thousand rubles per ton it was not raised. And there are more than 10 thousand.

This increase was not yet even once, it is a historical maximum”.

With the expert agreed and Gennady Pankeev, the owner of the network of filling stations “Prime” (earlier “Sibneft”). He said that this situation is “catastrophic”.

The Russian fuel Union have long thought such a situation knows Gennady Pankeev, but now a decision he does not see. “It is clear that it is necessary to lower wholesale prices, but we have assumed the increase in excise duty (from 1 July to 8.2 thousand rubles per ton. – K. Sh.). But this increase in excise taxes is nothing compared to what is happening today in the market. <…> If you will not do anything upstairs, I think, will be quite bad. <…> We also do not like the price increase, he says, and notes that if this situation continues, very soon in this market can expect a collapse. –

Oil companies by and large all the same. And independent either go bankrupt or be forced to sell all the concoctions”.

The price tags on the Novosibirsk gas stations change every week

After the price of gasoline will soar and the prices in the shops, economists say. According to associate Professor of the Department of corporate management and Finance NSUEM Tatiana Genberg, primarily the sellers will update the price tags on food.

“Gasoline is one of the components of the cost from 5 to 10%, and at a loss no one wants to work, so

Especially it touches those goods that long road suffer that come from the European part of our country for example. Products are by far. Perhaps for the industrial production of goods, which are expensive in themselves, and so taking them in the car. It may be a long chain, it can be clothes for example. And there may be an indirect increase in the price of components for the aircraft: we have collected the aircraft factory named after Chkalov. In the end it may come down to higher prices for tickets. <…> Will affect the goods that need shipping to the door. It’s either the finished product, dishes for example, or raw materials for industrial production. Expensive raw materials which are not supplied by rail and road”, – said the economist. She added that after the new sanctions against Russia to predict the situation on the currency market is very difficult – it is unpredictable, but the situation with gasoline will definitely have a negative impact. 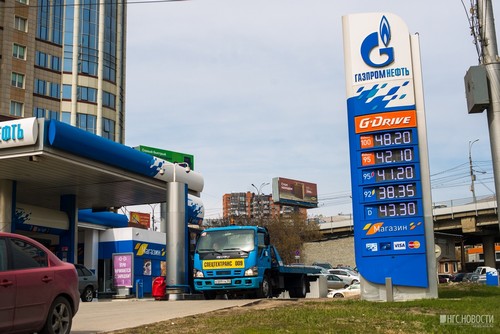 Online:report as Novosibirsk celebrated the Victory