May 9, at about 22:30 family Neustroeva together with a baby and a family friend were walking down the street Poplar. Passing by the house number 14, the company heard the screams.

“At first I did not understand why cry, – says Dmitry Neustroev. – Raised his head, see standing on the roof of the apartment buildings guys talking. One shouts: “Throw, there’s nobody there”. I say, “I’m like Keane”. And flying shovel.”

The man explained that the shovel he saw only when to depart it was too late – he instinctively raised his hand to close the child, but the shovel still hit baby on the head.

“I was going along, but nothing did not see, did not understand. Only then, when everything fell, I saw the shovel, – says Polina Neustroeva. – My husband was with the baby in her arms. Got up, took my hand and we see blood on the baby’s head. He gave me a child, and he ran.”

According to Dmitry, he and a friend ran after the teenagers, who hastily tried to leave the roof. “They ran away, I ran after them to catch – explains the man. – Caught up with one, started to miss, put steps, tried to catch, so it does not fall. I started to catch, he began to fall”.

Dmitry Neustroev he caught one of the Teens

According to Dmitry, they, along with buddy remained to keep the teenager until the police arrived, while his wife left with the child to the hospital. “We took the ambulance, a child of 11 stitches, – remember Pauline. – Thank God, the skull intact. Not a concussion”. The girl added that after the incident, the baby was often cranky.

The police, according to Dmitri, caught teen first resisted, saying that he doesn’t know about the shovel and just came out of the door, there was another. But when the police asked to call the friend’s name and apartment number, the teenager immediately called all the friends who were on the roof. Including other, rushing a shovel.

“The boy who threw the shovel with us once called up, spoke to him on the phone the husband – continues Polina. He told me that night to him the police did not come, he was home. And in conversation it became clear to us that his parents are not even aware about what happened.”

According to Pauline, the police told them that, most likely, the teenager rushing the shovel, nothing will happen, once the child was really hurt, the maximum penalty to forty thousand roubles. “Well, it’s wrong, it is wrong to leave – angry girl. What if the husband does not put his hand?”.

Neustroeva walked past house No. 14, when they are from the roof of flats fell shovel

The mother of 17-year-old Sergei* dropping a shovel on the head of a baby, claims it was an accident. “He did not see, – has told to the correspondent NGS Tatiana (the name changed at the request of the heroine. – A. I.) during a conversation on the phone. – To throw, he’s not that Marauder. It is pure coincidence… the Kids watched the fireworks. I saw the shovel raised. It as edge lay, so they dropped”.

The woman explained that initially the man does not know what hit with a shovel at people. He just saw him run by two men, and therefore fled. Tatiana added that now fears for the health of his son after Neustroeva told about the incident in the media, Sergey began to receive threats.

Dmitry Neustroev shows the spot where stood the Teens

Sergei himself, in an interview with the NHS told me that his friend Andrew* – the one who detained Dmitry together with a friend, is now in the hospital. “He eats through a tube, implants he will insert, explained the teenager. – Beat him, broke his jaw”.

“They kicked and kicked him, broke his jaw. Together, two grown men! This child is now in the hospital, his parents had a police report to write,” says Tatiana.

To reach the injured teenager and his parents have a correspondent NGS did not happen. The boy’s parents really wrote a statement on Neustroeva the police. Information about this was confirmed in a press-service GU Ministry of internal Affairs on NSO, adding that the case was referred to the Investigation Committee.

“One of the minors went down to the street where the father of the minor expressed his claim on the fact of causing bodily injury to a young child and caused minor injuries,” he described the incident in a press-service SK of Russia on NSO.

The roof where the teenagers dropped the shovel

If the examination confirms that the man really broke Andrei’s jaw, Neustroeva face liability under article 111 of the criminal code (grievous bodily harm) with maximum punishment of up to eight years of imprisonment.

However, Neustroev denies assaulting the teenager. “Neither I nor my friend it never touched, – says Dmitry. – I understood, what will be the consequences to me if I gave him any harm cause”. Neustroev added that the fact that he a broken jaw, he learned the next day when he with him was in the police, the teenager did not hurt.

“We have something arrived, can’t understand that with Daniel”

Torn by the wind the roof has killed the taxi driver, he died at the hands of his bride. 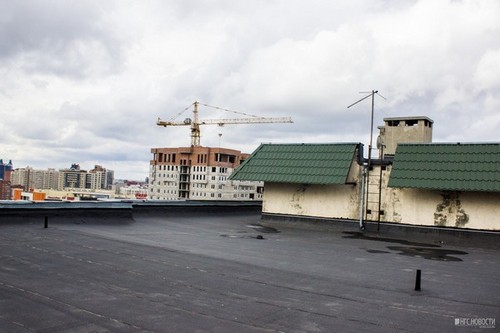 Siberians rode 750 miles through the mountains of Kyrgyzstan

A bus with passengers crashed at Sunrise

The choice of a car with mileage: a “Lexus” for “Germans”