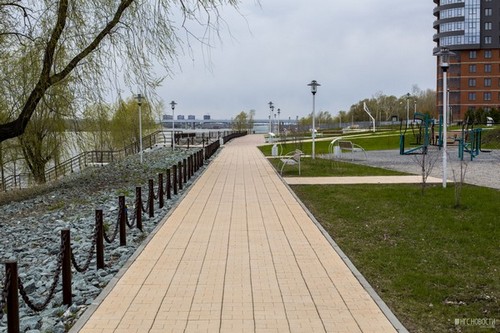 “Meta group” in the portfolio which today only one, but large-scale construction project – “Clear coast”, has announced yet another complex on the banks of the Ob river. However, this time on the right.

As described in the company, 15-16-storey house with a descent to the river appears on the shoreline of the Transcaucasian street, building plot of about 1 ha. Now the street is a small loop from the Ob, Berdsk, rolling into the alley. The street is dominated by garages, private houses and two-storey buildings, only closer to the Ob there are a couple of 9-11-storey houses and high-rise. Once there was a river port from which you sent the grain to the flour mill: a Handbook 2GIS still marked by the round turret of the Elevator, but the turrets anymore. 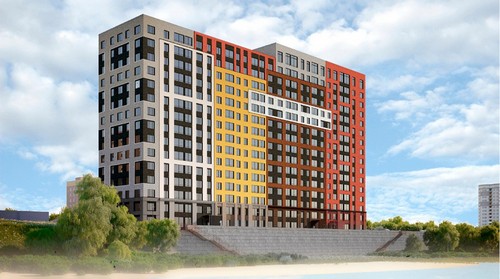 The new house will have two sections on the 303 apartments on the upper floors – open plan with high ceilings 4 m 6 out of 10 apartments, the developer promises to build with river view and zoom, and equipped with shading and UV protection.

The area ranges from 31 sqm studios to 76 sq. m. In some layouts, designed for families with children, provided a separate bathroom next to the parents ‘ bedroom. And all apartments have full or walk-in closets, or spacious niches for them. But the emphasis in the Mets decided to make the kitchen-living room.

– When designing, we thought: in the kitchen with the living room will always be “dvizhnyak”. In fact, it is the heart of the apartment, a key place and have already lined up a plan, explained marketing Director “Group Meta” Timothy Bells.

In every section of this forsaken place for 12 storerooms with an area of 1.5–3 square meters, will also pram and Bicycle storage room, and the hallways will make through. Near the house you will satisfied with down to the river, on a fenced terrace.

– We are working on the organization structures. It is already clear that we will transform this part of the coastline.

– The beach is not a beach holiday on the Ob is rather dubious pleasure, – noted in the company.

Underground Parking not available on-site – instead organize an outdoor ground with 162 seats on two levels, and for residents Parking will be free. On the ground floor, the developer left the place for commercial space – a shop with a coffee shop or a bakery and a kindergarten.

Now, “Meta Group” completes preparatory work and construction expects to start July 1 and finish it in two stages: one section will pass by the end of 2019, the second by may 2020. Prices for apartments has not yet voiced – conduct market research, but Timothy Bells assured that they will meet the stated level-class comfort, but at the start, may be even a little lower.

The main competitors of the new project now – home “Marseille” and still growing “European Coast”, although, according to independent analyst of the market of real estate of Sergey Nikolaev, closer to the Bolshevik may receive one or two homes from the other Builder.

In the “Marseilles”, which is literally in several tens meters from the future construction, now complete the last phase of the project and the cheapest apartment with the delivery at the beginning of 2020 sold for 2.2 million rubles – Studio with an area of 29 sq. m.

In the “European Bank”, according to the site the developer, at different stages of construction are now 4 houses: two houses down the block that promise to deliver later this year and end the next, and the two “candle”. Housing prices start at 1.55 million rubles in the building, with commissioning in the second quarter of 2020.

According to Sergei Nikolaev, to compete with the whole neighborhood the new project will not be easy.

– “Sibakademstroy” sells not just square footage, they say they sell “lifestyle”. In a sense it is, – said the expert. – They have a bigger plot, and if you’ve bought an apartment, you will have solved many of the problems. At least with schools, kindergartens, cafes within the home. And apparently, they have enough money to build the promenade.

In the “Meta Group” to talk about the extension of the promenade is not yet finished – a prospect more remote than the period of the construction of a house.

– Still between our site and the waterfront are still several plots of land, to expect that the quay will be extended in the near future, unfortunately, is not necessary, – said Timofey Bells. – Today, these plans would have been, unfortunately, unhelpful, but of course we are interested and will consider all options for collaboration.

To talk about the extension of the promenade to a new home in the company-Builder are not ready yet, and to merge it with the neighbors

The advantage of as-yet-untitled project “Meta Group” can be a little more successful place: the new house will be closer to subway than home competitors and it is much easier to walk. Although the main problem and a new project, and at home, “Marseille”, neighborhood “the European Coast” – congested street and the Bolshevik – remains unresolved. However, I’m sure of Nikolaev, it can be solved by joining forces interested in a new way that developers.

– If all developers are going, they can stretch direct route to the subway, – he said. – And if there to put a bus, it will greatly improve transportation. I have this big problems do not see, it’s just expensive.

However, given the projects not yet announced and still empty acres in front of the houses of the “European Banks” in the first line of the Bolshevik scheduled in all layouts of the area once the road will certainly be real.

Changes in the coastline gradually raise the issue of the “river facade” of Novosibirsk, which is still in the city, it seems, thought much. On a new project “Meta Group” with its own team worked with a team of architectural Bureau “interproekt”, and its facade is hard not to notice the stylistic references to built in European minimalism home “European Banks”. According to Timothy Kolokolov, the Builder has the prospect of building along the coast, and in the end the project could rise to complex in the same style

which, together with the already constructed district can generate the same “face of the city”, which sees the citizens from the left Bank and the river.

Chief architect of the company Akademstroyproekt Artur Lotarev notes that still, the single concept of development of the banks of the Obi, not to mention some formation of the General style of this building in Novosibirsk does not exist.

– Could the chief architect to request a scan of the entire coastal area – it would be correct. Well, at least some regulation would be, and I don’t see how it all looks so ragged and not assembled – he complained.

Now, according to the architect, about the time serious development of the waterfront has just begun, from development and at the same time at least some improvement freely to 90% of the territory along the Ob river.

A large part of the river front is not touched, so the meaning is. Now if this is not done, then it will not. We have the same as reasoning: why would I do that when others don’t? – says Lotarev.

However, stylistic unanimity, which, it seems, can be formed on the right Bank, may give impetus to the discussion of the “river facade” of Novosibirsk, and next developers may already be forced to pay attention to it.

Red area: near plant NEVZ build a new residential complex with apartments for the young at 70 thousand per square – NGS learned how to change Red Avenue

Freebies birthday: novosibirets has created the service for free

13-year-old boy left school on may holidays and lost