The largest great white shark ever recorded doesn’t sound like an inviting diving companion, but some incredibly brave scuba divers decided hanging out with the toothy monster was just their kind of thing, and it went… well, it went fine.

It wasn’t entirely a coincidence, of course, and the divers weren’t tourists. They were there to observe shark behavior around the carcass of a dead sperm whale. There were plenty of regular customers, according to researcher Ocean Ramsey, before this creature created a disturbance in the force.

Ramsey spoke to the Honolulu Star-Advertiser about the experience:
“We saw a few tigers and then she came up and all the other sharks split, and she started brushing up against the boat,” Ramsey said in a phone interview that evening, her voice trembling with exhilaration and exhaustion after swimming with the shark all day. “She was just this big beautiful gentle giant wanting to use our boat as a scratching post. We went out at sunrise, and she stayed with us pretty much throughout the day.”

That’s right, this great white straight out of a Jason Statham movie is apparently the apex predator equivalent of a teddy bear. No, seriously, Ocean Ramsey tells the Star-Advertiser this giant is «probably the most gentle great white I’ve ever seen. Big pregnant females are actually the safest ones to be with, the biggest oldest ones, because they’ve seen it all – including us.»

Ramsey says she has encountered this giant before and calls her «Deep Blue.» That charming nickname goes along with the researcher’s contention the shark is «like, a grandma shark.»

To be clear, Ocean Ramsey is a serious shark expert, and she and her dive team had a permit from the NOAA to be there. She says non-professionals need to be wary, as some recreational boaters near «Deep Blue» found out the hard way.

According to Ramsey, Blue «sort of gently mouthed» one of the inflatable boats «and those people left shortly after that.»

Not to contradict an expert like Ramsey, but how does a 20-foot great white «gently mouth» anything? We’re not talking about a 20-foot golden retriever. 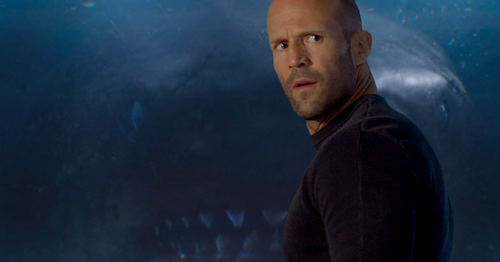 It’s anti-climactic, discovering that the most monstrous great white ever seen is kind of a big sweetheart. Jason Statham would be disappointed.