Porsche’s new 911 is the fastest, strongest, and grippiest ever made. 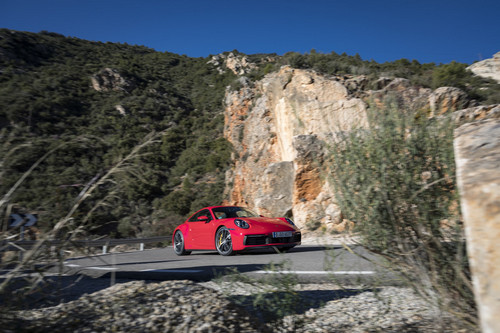 The Porsche 911 has been polished to such a degree of near-total perfection that there is very little left to be improved. This makes the jobs of Porsche engineers unenviably challenging: Make the 911 better, but don’t change everything fans love about it.

OK, sure, no problem: here’s your better, largely unchanged 2020 Porsche 911. At this point, upgrades are subtle substitutions, but Porsche has still decided to give this better 911 its own model designation: 992. That is the obvious replacement for the outgoing 2019 991 version of the 911.

It can be tricky to tell the difference, so here’s your quick primer on ten key technical features that are new in the 2020 911. 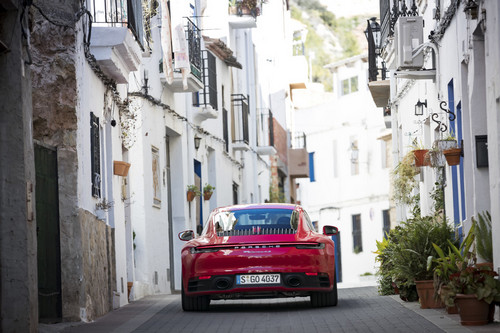 This wider stance reduces the tendency of the 911’s body to roll when cornering, permitting the use of softer anti-roll bars, which contributes to the new car’s improved ride, according to August Auchleitner, vice president for the 911 and 718 models. 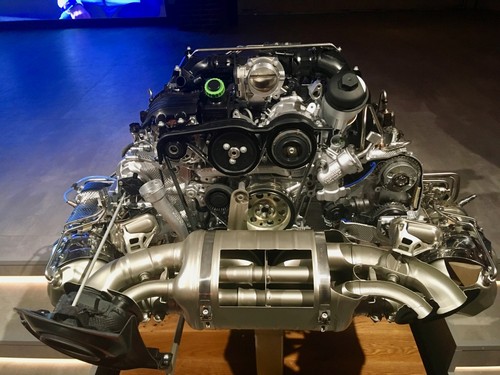 Porsche has enlarged the turbochargers on the Carrera S and Carrera 4S models, increasing the diameter of the turbo impellers by 3mm to 48mm and the compressors by 4mm to 55mm. These go with a redesigned intake system with larger, repositioned intercoolers and piezoelectric fuel injectors that blast the fuel into the engine at higher pressure. The result is another 23 horsepower and 22 lb.-ft. torque, bringing the 911’s 3.0-liter flat-six totals to 443 hp and 390 lb.-ft. 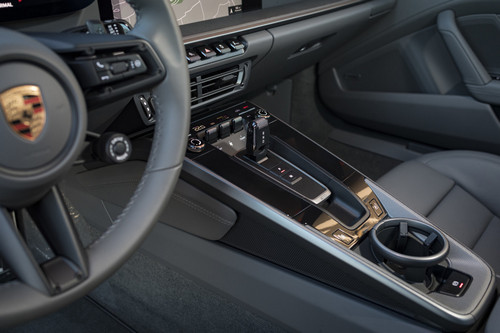 In place of the old 7-speed dual-clutch PDK automated transmission, the 2020 911 now has an 8-speed PDK gearbox. The first seven gears of the new transmission have lower ratios than before for quicker acceleration, plus the eighth gear, which is longer than the old car’s seventh gear, for better fuel efficiency.

The extra power and revised gear translate to quicker acceleration. The new 911 Carrera S can sprint to 60 mph in just 3.3 seconds, while the all-wheel drive traction of the Carrera 4S lets it get there in 3.2 seconds. 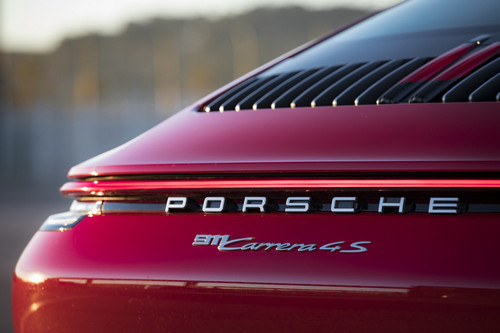 The Carrera 4S enjoys an enhanced all-wheel drive system for 2020. The clutch and differential for the front axle are now water-cooled for durability and the clutch discs are reinforced. These contribute to the front wheels’ power being more precisely controlled, for better performance on the track, on curvy roads and when traversing wet or snowy roads. 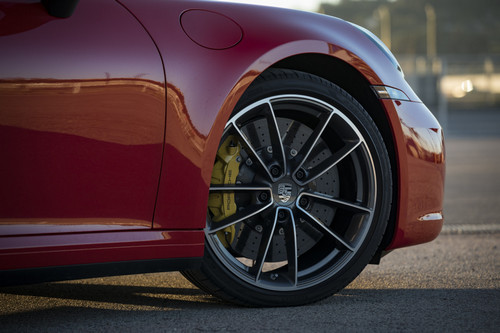 For the first time in a production street 911 (the GT2 RS track car has done it before), the 2020 911 has larger rear wheels than fronts, helping put the added power to the ground through correspondingly bigger tires. That means the fronts are now 20 inches and the rears are 22s. 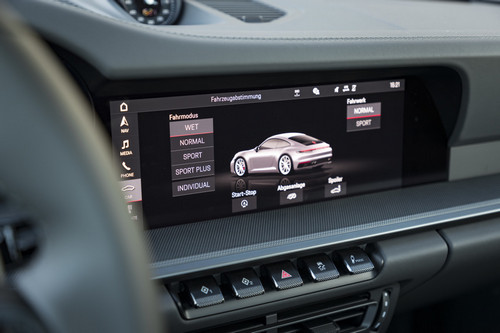 Porsche calls its electronic stability control system «PSM,» which stands for Porsche Stability Management. But in German engineer humor, it actually stands for «Please Save Me,» because that is the effect of the computer system when the driver makes a mistake.

For 2020, PSM includes a Wet driving mode that helps reign in the 911’s power in case of over-exuberance on rainy days. The car has microphones in the wheel wells that detect the sound of wet pavement and it automatically switches to a more restrictive traction control and stability control program.

It also recommends to the driver switching to Wet mode, which causes the car to shift more power to the front wheels and to slow throttle response, helping the driver avoid breaking traction accidentally. 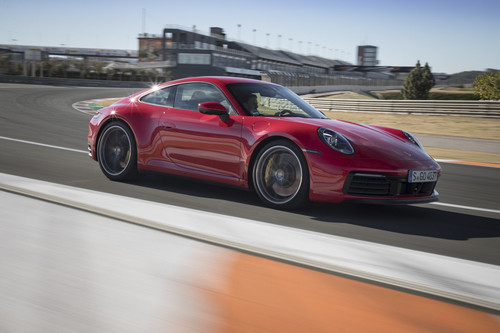 Those bigger wheels and tires provide more space for enlarged brake rotors and more grip for deceleration. The rotors have grown from 330mm to 350mm, front and rear. To provide optimum boost, the 911 now has an electric power brake booster rather than one that relies on engine vacuum, which varies, for more consistent response.

The McLaren Senna and 600LT we drove previously also employ this hardware, so we already appreciate its benefit. The 911 adds a shortened carbon-fiber brake pedal, which effectively eliminates any kind of deflection in the pedal for maximum brake response and pedal feel. 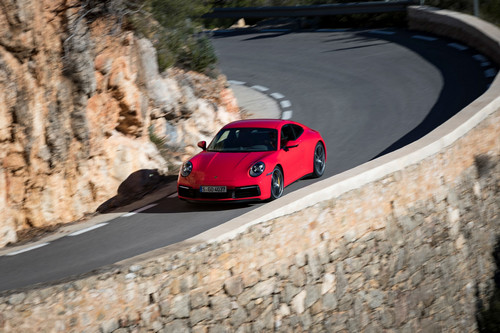 The 2020 911 has steering response that is 11 percent quicker than before, thanks to a faster-ratio steering rack. There is also optional rear-wheel steering, which can add another 2 degrees of steering from the back wheels in tight switchbacks.

Despite these lightning-fast reflexes, the new 911 was not twitchy or unstable, either during laps on the track in Valencia or on Spanish mountain roads. 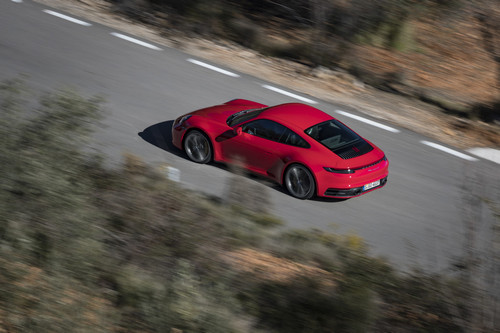 The new 992-generation 911’s body shell is 5 percent stiffer in both bending and torsional rigidity, thanks to increased use of high-strength steel in its core and the substitution of lighter aluminum panels for parts like the doors and rear fenders, which were steel until now. 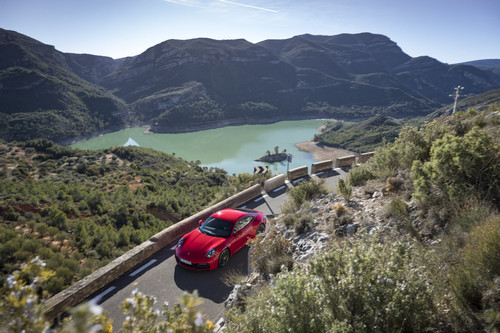 The combination of all these upgrades is a car that is still faster and more confidence-inspiring than ever. The 2020 911 car tear around the Nurburgring in 7:25, which is five seconds faster than before, despite its cushier ride and Wet driving mode safety net.

Shredding Spanish mountain roads, the 911 C4S displayed astounding precision and control, making it easy to indulging full-throttle blasts even on the downhill segments, which usually sap confidence as the car gains speed so quickly and loses it so poorly compared to the uphill sections. 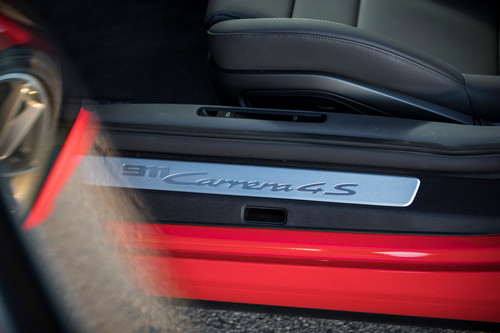 It is the same on the track, where the car is easy to place exactly where the driver intends, while the car holds its course even as the anti-lock brakes are shedding velocity on the entrance to corners. 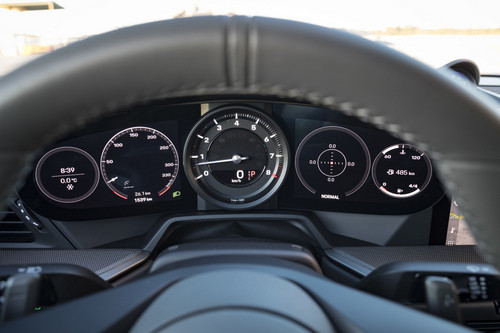