That’s one way to hydrate. 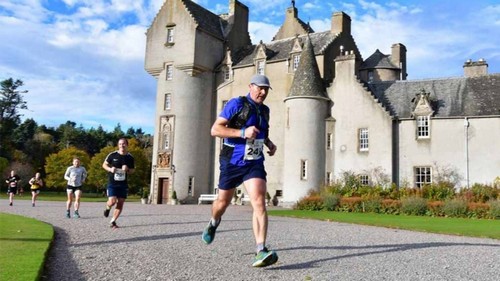 A scotch fan in the Dramathon

Marathoners are rail-thin super-athletes who never touch liquor, right? Not exactly. At least not in Scotland. That’s where the Dramathon is held, a long-distance run that happens in October and stretches from the Glenfarclas to the Glenfiddich distilleries.

The scotch-y element isn’t incidental. The marathon’s route takes runners on a smoky, peaty tour of more than one Speyside distillery, presenting plenty of opportunities to re-hydrate on the run.

Scotch fans Jon Dunderdale and Ian King created Dramathon. On the event’s website they tell the story of how it came to be:

The Dramathon was dreamed up by Jon Dunderdale and Ian King over a dram or two. We are running and single malt enthusiasts (one of us is better at running, the other is better at whisky).

We aim to create an event which is well-put together and professionally organised, but that retains a sense of humour, a chilled-out atmosphere, is inclusive, and great value for money. This is all supposed to be fun – right?

Certainly sounds fun, and they clearly meant it to be, because you don’t actually have to mess with the entire 26.2 mile length of the run. It’s basically a multiple choice race.

Those who’d rather get some doable roadwork in then sit down for scotch with friends can knock it off halfway through or do just 10k.

The Balvenie is just one among several sponsors, all quality distillers. It might be difficult to keep running with enough good samples on hand.

Anyone feeling ready for the challenge and a taste of Scotland in the fall can register for The Dramathon and pay fees from as low as $40 USD up to $160. The race happens on October 19th, so fill your water bottle with fine scotch whisky and start training today.

The developer bought the city quarter with houses on the “Telecentre”