But first, one of these undefeated boxers has to win on Saturday. Who you got? 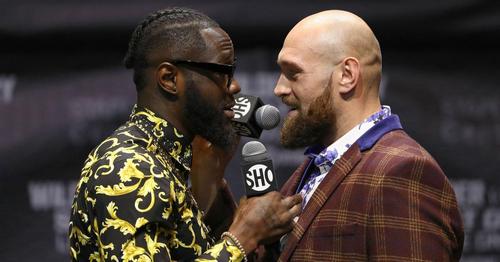 Two unbeaten heavyweight boxing stars are squaring off for a world title and a combined $24 million fight purse on Saturday night. And to quote an old boxing adage, «Somebody’s ‘O’ has got to go.»

Wilder is also an accomplished smack talker, so the two hulking heavyweights have been trading plenty of verbal jabs ahead of the fight.

Wilder stands to rake in $14 million for the December 1 megabout that’s the biggest heavyweight battle in years, while Fury is expected to make $10 million regardless of who wins.

It will be the most lucrative payday for either fighter so far in their careers, with Wilder set to almost double his net worth during his nights work at LA’s Staples Center.

But a truly epic reward could await the winner if he chooses to fight British star Anthony Joshua and unify the heavyweight titles, reports CNBC.

Speculation has already begun as to what will happen after the fight, with Wilder’s terms including a rematch clause should he lose the belt he’s defended seven times already.

However, should there not be an appetite for these two to fight again, the winner may decide to move onto a bout with the other heavyweight champion in the division Anthony Joshua.

Joshua holds the three other major titles and has been regularly selling out 80,000-seater stadiums in Britain. Despite holding discussions with Wilder and Fury in the past, a deal was never made, but that stance may change depending on the outcome this weekend, opening the door for what could be a fight purse in the region of $100 million for a heavyweight superfight in 2019.

Forbes breaks down the odds on whether Wilder or Fury will prevail on Saturday night:

The latest odds, per OddsShark, has the champion Wilder listed as a minus-170 favorite. Fury checks in as a plus-140 underdog. The oddsmakers see it a close fight or at least one that is difficult to call.

Wilder’s status as a favorite is purely based on his mammoth punching power. The champion carries a whopping 98-percent KO rate into the fight, and he has made it clear he plans to turn out Fury’s lights. Fury might outbox Wilder, but most everyone believes that if the champion lands flush on Fury’s chin, the festivities will be coming to an end.

That said, Fury has the better footwork, punching accuracy and overall refinement as a boxer. He’s also one of the few opponents that Wilder will face who is taller. The size could play a role, but even more troubling if you’re on Wilder’s side is Fury’s movement.

If he can move and frustrate Wilder, he will have counterpunching opportunities. Fury isn’t known as the biggest puncher, but he’s still a 6’9″ heavyweight, so there is enough power there to do some damage.

Meanwhile, both fighters are doing their best to hype the match-up that will earn them the biggest checks of their careers.

«I stand for more than just a championship. I’m here today as an ambassador for mental health and I am the people’s champion. I am the man who gives the people hope,» Fury said at the fight’s final press conference Wednesday.

The fighters and their entourages had a brief scuffle at the presser (as fighters at such events are wont to do) but they were separated before any punches were thrown.

«It’s just the emotion that’s come out of it. He’s always talking about how he comes from his motherland where no man can beat him and all the things that he’s done. Well, if so, and I’m so less of you, why haven’t you accomplished what I’ve accomplished?» Wilder said following the dust-up.

Come Saturday, we’ll see who truly is «the man» in boxing’s heavyweight division.

How to watch Wilder-Fury

Novosibirsk will block the morning: the city waiting for the rehearsal of the Victory Parade