A young breast cancer survivor is on a mission to prove that cancer doesn’t make you ‘un-sexy’ after baring her mastectomy tattoos.

Hairstylist and model, Allyson Lynch, 30, from Philadelphia was diagnosed with breast cancer when she was 26, after a self-examination where she noticed a lump that wasn’t there before.

‘I had some very dark moments and it was more challenging than I could have ever imagined. I wanted to give up at points, I said I would never do it again. I just cried, I cried every single day,’ she recalled.

‘Until, there was a day that I realised I hadn’t cried and I stopped asking ‘why me’. I found a strength I never thought I could possess. I learnt it was me because I could handle this, it was me because I am a strong wonder woman and you know what, I made it through hell once and I would do it again.’

Her battle inspired Allyson to get her stunning tattoos instead of fake nipples on her breasts.

‘Every time I look in the mirror I feel pretty. It helps get over the loss of my breasts, it was my way of taking back what cancer took away. I was reclaiming my body.’

‘I had tattoos before cancer was even a thought in my mind I had always loved the beauty behind tattoos. So, when I knew I was having a mastectomy I didn’t really see the point of getting fake nipples that serve no purpose.’

Hairstylist and model, Allyson Lynch, 30, from Philadelphia was diagnosed with breast cancer when she was 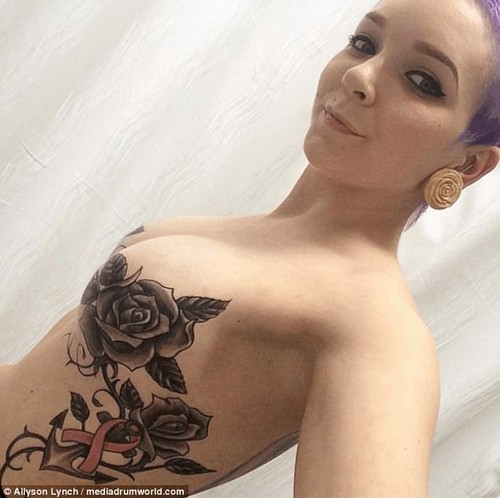 After seeing her mother survive breast cancer, Allyson knew the importance of early diagnosis, and after ignoring the lump for a few days went to see her doctor who confirmed she had cancer.

Following her diagnosis, Allyson had a bilateral mastectomy with spacers put in place and then endured 16-rounds of gruelling chemotherapy over 20-weeks in which time she was unable to work.

Prior to starting chemo, she had to make a decision no twenty-something should have to make; whether or not she should harvest her eggs.

Many of the chemo side effects such as fever, losing her nails and crippling pain throughout her body were uncontrollable but Allyson decided to take control of her hair loss and held a head shaving party before treatment commenced. 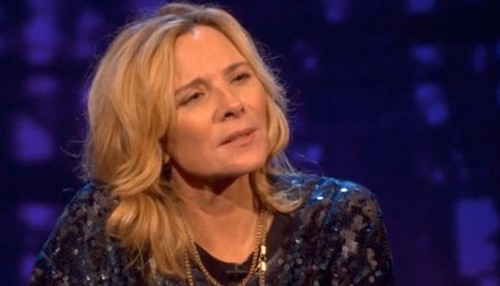 In December 2015, she underwent breast reconstruction surgery. Allyson decided to get tattoos over her mastectomy scars, reclaiming what cancer stole from her which finally made her feel beautiful again.

‘Immediately life turned upside-down. I was faced with a lot of big decisions I never thought I would even have to consider before thirty and all I could think was I wanted this thing out of me,’ she said.

‘The great staff at the hospital helped ease my mind and get me set up with health coverage. I ended up being BRCA1+ and opted for a bilateral mastectomy for peace of mind. 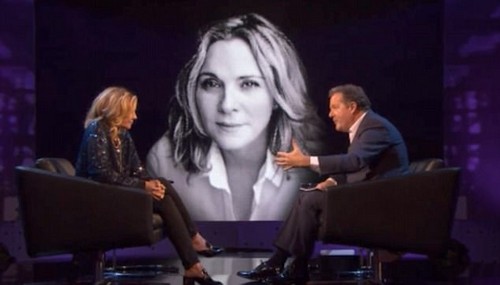 Before her hair could fall out, Allyson took control by shaving off her own locks

‘Initially I thought I had caught it early enough and I could just have surgery, reconstruction, and get back to life. Unfortunately, that wasn’t the case.

‘I was also faced with something I never realised was an issue, fertility, which I then found out harvesting your eggs was very costly and not covered by insurance. All I ever wanted was to be a mom and I didn’t want to lose the chance to carry my own baby.

‘I would be losing all my hair, so, to take control of something I decided to have a head shaving party before it all started to fall out. I didn’t want to see clumps of hair in my hand.

‘Some of my closest friends and family shaved their heads with me, a memory I will never forget.

Alysson, pictured with her partner, said that going through a horrendous period in her life has pushed her to become stronger

‘Treatment was very difficult, getting out of bed was extremely painful at times, and I ended up hospitalised twice.

‘Pain like I have never experienced in my life, my whole body hurt, nothing was comfortable, even the softest blanket felt like rocks. I was nauseous all the time. Eventually nothing tasted good, I loaded salt and sugar on everything trying to make it palatable.

‘I lost all my hair, everywhere, believe it or not nose hair is actually very helpful. I had nose bleeds. And even after treatment was over the side effects didn’t stop and it took a long time for my body to get back to normal and shortly after my last dose of chemotherapy all of my finger and toenails fell off.

Allyson having her head shaved before treatment. Some of her close friends also had their heads shaved in solidarity

‘One thing positive I was able to make happen for myself after completing chemotherapy was getting tattooed. I took back and reclaimed what cancer had taken from me. My tattoo artist, John Pohl, brought my idea to life and tattooed over my mastectomy scars.’

After seeing family members battle cancer in the past, Allyson didn’t realise quite how difficult treatment would be until experiencing it first-hand. She even wanted to give up but found a strength inside her she didn’t know she had and says she would go through it all again.’

Now, Allyson hopes to be an inspiration and support for others going through treatment.

‘I try to use my experience to be that person I needed when I was in treatment. I have always been very open about my journey especially on social media. I’ve been able to connect with quite a number of women,’ she said.

‘When diagnosed I constantly looked for somebody that I could relate to somebody that reminded me of myself that wasn’t the normal middle-aged woman you typically associate with breast cancer. I wanted to see someone young, edgy, and relatable.

‘When I find messages in my inbox from young women just starting out in their journey it breaks my heart but I am happy if I can make some sort of difference, it makes it feel as if the whole situation was worth something.

‘I’ve been able to use my modelling to show people that cancer doesn’t stop you from being a woman, it doesn’t make you un-sexy, we are women and we are powerful.

‘Sometimes it takes a tragedy to push you into the person you were always meant to be.’