A size 10 competitive eater has wowed her online following with her latest challenge, which saw her polish off a family-sized feast in under half an hour.

Kate Ovens, 23, from Fleet, Hampshire, shared footage of her efforts on her YouTube channel on Monday.

In the video the pint sized blonde can be seen ploughing through eight chicken wings, four chicken tenders, loaded cheesy nachos and 14 onion rings – topped off with an added bucket of an additional 20 wings.

Despite her gastronomic feats, Kate manages to maintain a size 10 figure – something she puts down to the scrupulously healthy routine she adheres to in between challenges.

A regular gym-goer, Kate eats healthily on a daily basis when not competing – and ups her vegetable intake when preparing for a new feat.

The ‘sharer challenge’, set by the Village Hotels in Farnborough, had no time limit, but the vlogger still managed to see off the groaning platter in just 30 minutes.

The 5ft5ins Kate, who boasts an impressive YouTube following of 32,000 subscribers, was quick to get stuck in and made a sizeable dent within the first few minutes. 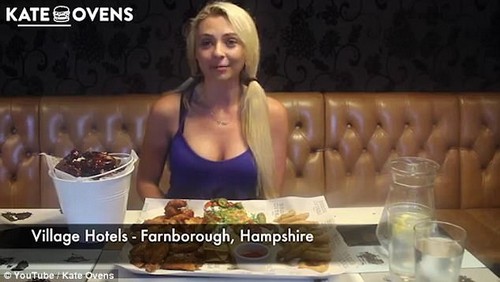 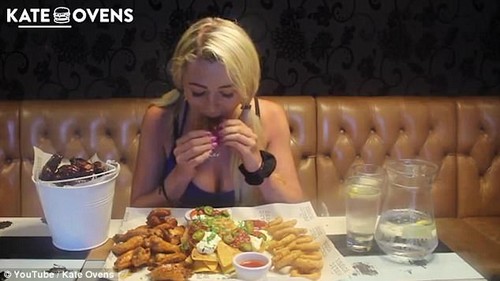 But after pouring her 20 wings onto her plate she realises she still has a long way to go adding: ‘I thought I was close to finishing – how wrong I was. That was like one of the worst decisions I’ve ever done.’

By the ten minute mark Kate is left with just six wings, a few nachos and a couple of onion rings on her plate and she completes the challenge just before the half an hour mark.

Speaking on the video she says: ‘This has been absolutely delicious – the chicken wings definitely cascaded down. Cheers to the last bite.’

Kate completed the challenge in just under 30 minutes and her video has so far amassed more than 4,000 views

After sharing the video just two days ago Kate’s conquest has already received more than 4,000 views.

This is just the latest in a long line of foodie challenges completed by the aspiring TV presenter.

The marketing graduate, who now lives in London, likes to take on an eating challenge every couple of weeks with previous conquests including a 100 Jaffa Cake challenge and a 1,000 calorie ‘dustbin lid’ challenge.

Kate previously revealed that she prepares for her hunger games by devouring more vegetables.

‘I’ve always been a good eater,’ she said. ‘When I was in my teens I was a little bit bigger, because I had a good appetite, but even though I started going to the gym and lost the weight, I’ve still always had the same appetite.

‘I do a lot of exercise and I eat incredibly healthily in the gaps in between, but I do love doing my food challenges. I suppose I’m a new form of food critic. I just love food.

Kate loves eating and her favourite food is margarita pizza, which she loves so much that she once managed to almost polish off a massive pizza measuring 27 inches – one of the largest available sizes in the country – leaving behind only a few crusts.

After graduating the Newcastle University, Kate moved to London where she works in marketing – and tackles massive dishes as a hobby.

Is there a future with the former?

Riverdale star Madelaine Petsch was bullied over her hair