One nonprofit is weaving a major impact for children with cancer by creating handmade yarn wigs modeled after popular Disney characters including Rapunzel, Elsa and Captain Jack Sparrow.

The operation started just two years ago when one Alaska oncology nurse Holly Christensen fashioned a Rapunzel wig for her friend’s two-year-old daughter after she was diagnosed with cancer.

After seeing the joy her yarn wig gave the tiny tot, Holly,  along with her friend Bree Hitchcock created The Magic Yarn Project in 2015, which has since gone on to create 4,200 wigs for children undergoing chemotherapy in 29 countries across the globe. 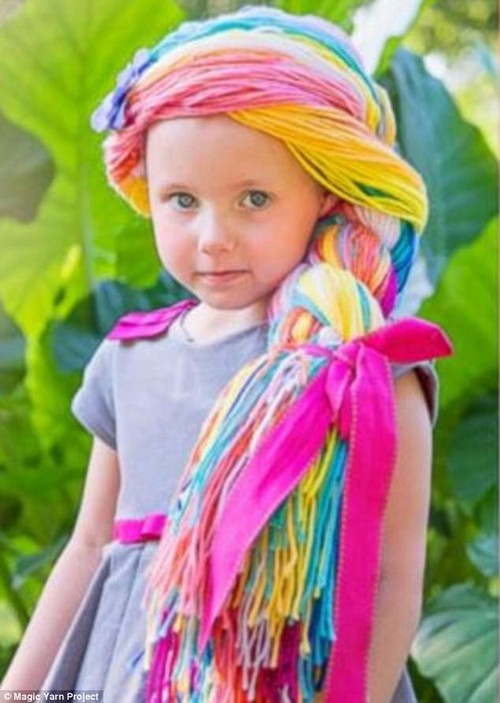 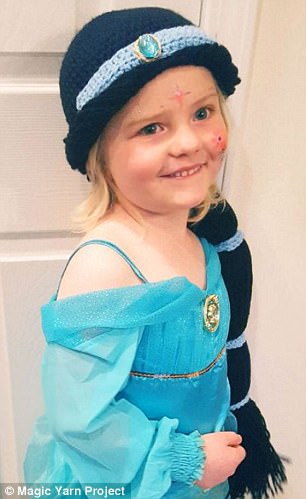 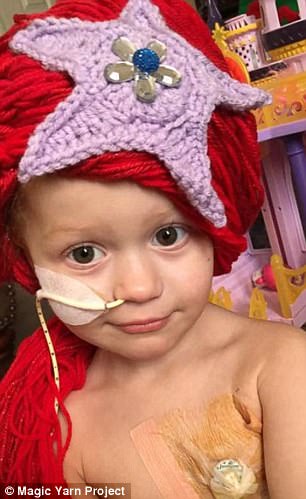 Princess project! Two little girls smile in a Princess Jasmine wig complete with dress (left) and a flame-haired Little Mermaid wig, from under the sea (right) 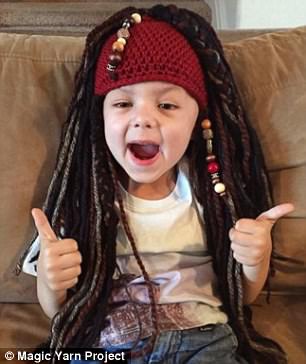 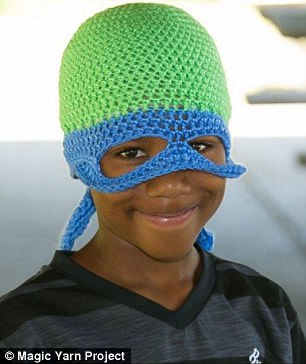 Thumbs up! The wigs are by no means just for girls, boys too can choose from Jack Sparrow costumes (left) or super hero inspired crochet caps (right)

‘One of the things I learned that I can’t do everything but I can do something,’ Holly said in a video on the organization’s website.

‘When my friend’s daughter was diagnosed with cancer, I decided to make her a Rapunzel yarn wig,’ she explained.

‘She was able to see her daughter just be a little girl again who was twirling around in her dress with her Rapunzel braid and having fun. This little girl who had previously been lost in this painful, scary world of cancer.’

Since then Holly has expanded her endeavor through Facebook crochet recruits and Gofundme support, which is where she met her co-founder Bree.

‘I read her post, and I contacted her the next day to see how I could help, as I thought the wigs were completely beautiful! Holly and I planned our first small workshop and from there our project took off!’ Bree shared to Daily Mail Online.

‘Our story went viral and wig requests have been pouring in ever since. Within a couple months we were an official non-profit and today we have sent over 4,200 wigs to children around the globe for free,’ she added.

Today the nonprofit is flourishing, and is joined by over 3,000 crocheters – also known as Magic Makers – through national workshops and individual good-hearted volunteers.

Each wig starts out as a simple crochet beanie that is then adored with layers of long yarn strategically styled to model the hair-dos of Disney characters such as Belle of Beauty and the Beast, Princess Jasmine of Alladin, and Ariel of The Little Mermaid. The group also creates beanies based off super heroes and sports teams. Each beanie takes about two hours to complete – depending on the style.

Why yarn? The website explains that wigs are too harsh for the scalps of young child undergoing cancer treatment and that yarn, on the other hand, offer a softer and more comfortable hair option. Yarn also opens the door for more playful hair designs. 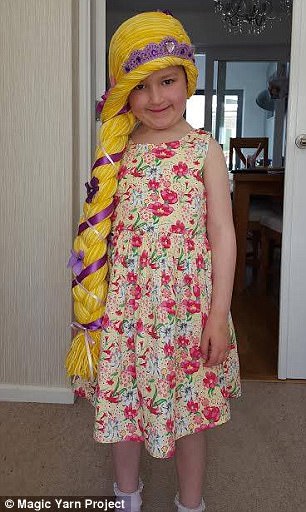 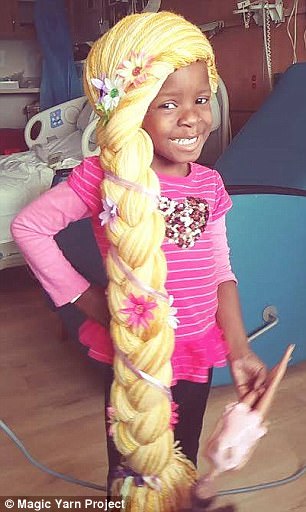 Let down your hair! Two girls flash grins in their yellow blonde Rapunzel braid that make them feel the royal treatment 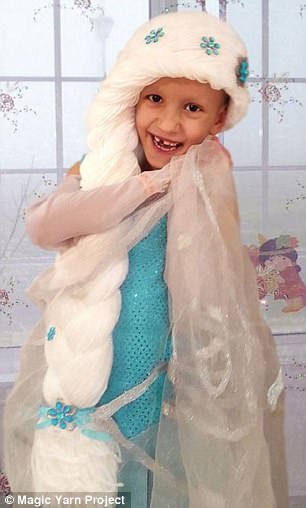 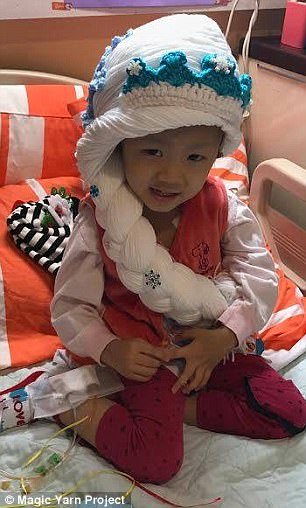 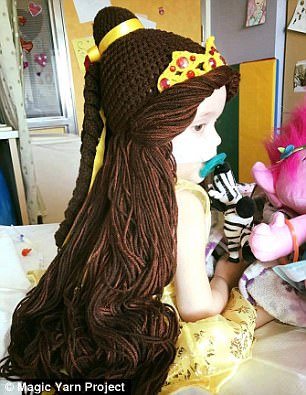 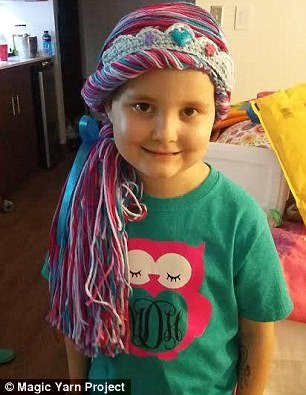 Belles of the ball! One tiny tot dons an elaborate Belle costume (left) while another girl dons a multi color side pony wig, complete with royal tiara 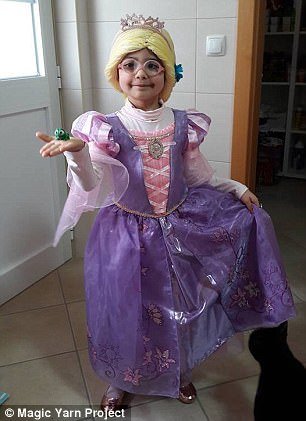 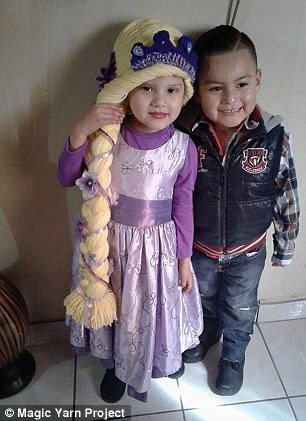 Royal affair: These girls love Rapunzel so much, they wear matching outfits to compliment their magic yarn princess wigs

‘Magic yarn wigs are inspired by beloved Disney characters, and invite children back to the world of play and daydreaming,’ the Magic Yarn Project website explains.

‘They are beacons of fun, laughter, and play, during scary times,’ the site adds.

‘We’ve received stories about how a child hadn’t smiled in weeks, or a girl was being bullied in Kindergarten for not having any hair until she wore a Magic Yarn wig to school, or a preschooler who didn’t want to go to her own fundraiser until her rainbow wig arrived,’ Bree shared on the most rewarding parts of the job.

‘Our wigs make a difference, and are Magic Makers (volunteers) love being involved,’ she added.

Another perk of the job is the community outreach that the nonprofit fosters.

‘We also have a Magic Yarn Project program at our local women’s prison. Where inmates can participate if they have had good behavior. They are taught how to make our beanies and wigs! It has become an inexpensive, positive rehabilitation program for them,’ she explained on their work.

The Magic Yarn Project takes to Facebook to share the grateful smiles of their wig recipients, ravishing in their new daring looks

One post introduces a five-year-old named Amelia who was growing her hair ‘long like Rapunzel’ until she was diagnosed with Burkitts Non-Hodgkin’s Lymphoma last June.

‘She will have to undergo two to six rounds of chemotherapy and her mother had a hard time finding the words to tell Amelia that on top of being so sick, she would also be losing her hair,’ the organization’s Facebook page shared.

‘We are so grateful for the family friend who reached out to us requesting a Rapunzel wig for sweet Amelia so that she and her family could have some moments of magic and joy during such a difficult time,’ their Facebook page read on the wigs created by their Utah chapter.

The little one is then pictured giving
a bashful smile with her head transformed into a knee sweeping yellow braid adorned with flowers, a perfect replica of the Disney princess Rapunzel. 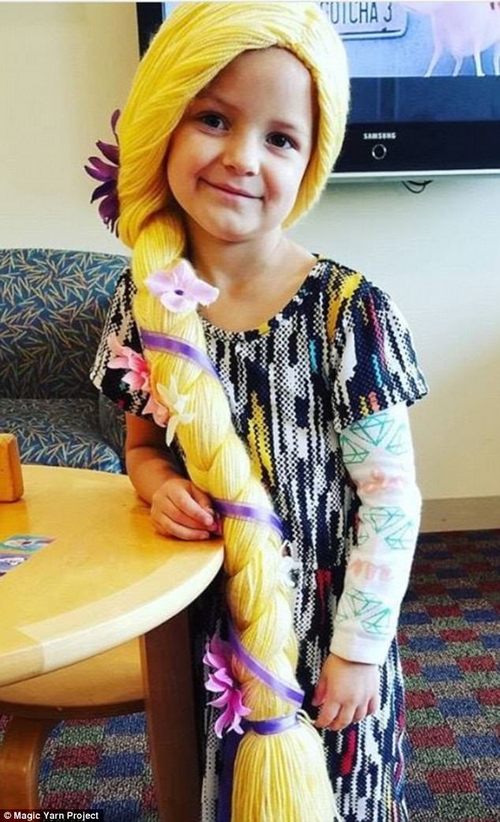 Bashful: Amelia, 5, was spotlighted on the organization’s Facebook after her mom didn’t know how to tell her daughter of her impending hair loss, but a yarn wig was the perfect comfort 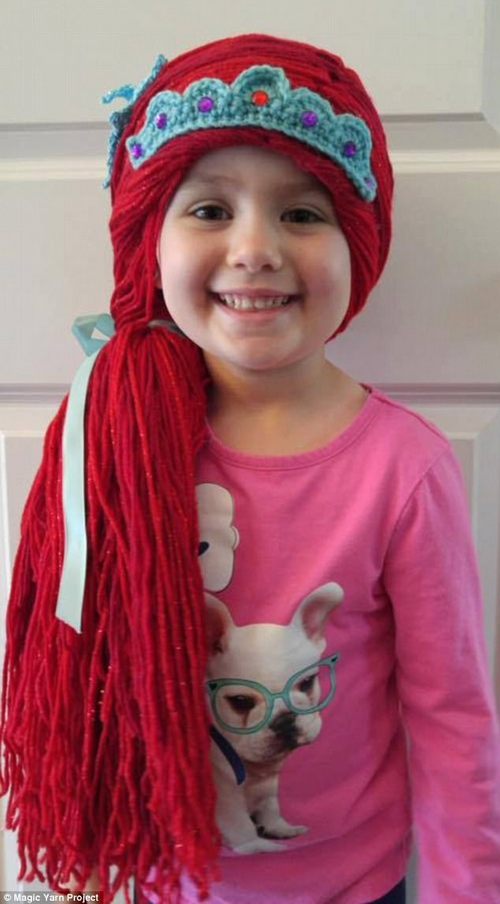 Part of her world! Mackenzie, 5, was also highlighted and her parents revealed the wig made the little one feel beautiful after she felt ‘very self conscious about her appearance’

In a following post the organization highlighted another recipient who felt self conscious about her appearance after treatment, but with the yarn wig, she gained a royal sense of confidence.

‘Mackenzie is a five-year-old girl from Canada who has been battling Leukemia for a little over a year. Her hair began to fall out slowly after her treatments began but she lost what hair she had left in January 2017 due to the aggressive chemo schedule she was on,’ a Facebook post shared.

‘Her hair has begun to slowly return, but she is still very self conscious about her appearance. We were happy to send Mackenzie a beautiful Ariel wig and even happier to see the smiles it has brought!’ the post added.

And the little one’s radiant smile was overjoyed with her Little Mermaid wig and matching fit.

The organization’s work has been spotlighted on Twitter where fans are applauding the two founders for their meaningful mission.

‘In the midst of madness remember that hope & goodness still exist. Sometimes it’s a conversation, other times it’s a wig but, there is hope,’ one user Alix expressed.

‘Very cool! I hope this brings some light to courageous children and their families,’ fan Glen wrote.

‘This is so creative. It lets these kids feel like the have something unique, despite the terrible disease they’re trying to overcome,’ another supporter Felix wrote.

The young company has plenty of room to grow, and has masses of interested volunteers to carry out the deed.

‘In multiple countries, we are making strides towards opening up new chapters in the US in 2018. We need more funding and are open to corporate partnerships to help us create even more Magic moments for children battling cancer,’ Bree revealed on the vision for the future of the group.

Until then wig by wig the group will attempt to tackle the staggering number of nearly 83,000 new diagnoses of childhood cancer around the world. 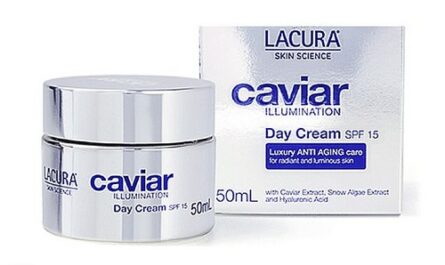