Madelaine Petsch’s long red hair helped land her the role of Cheryl Blossom on Riverdale, but the actress was cruelly bullied over the color of her waist-length locks when she was a child.

The 23-year-old CW star’s vibrant hair has become a point of envy for her fans, and while she no longer gets made fun of for it, people now question whether it is her natural hair color.

‘I get asked if my hair is real, if my eyelashes are real, my butt’s real. It’s constant. It’s all real. All natural, baby!’ she told Cosmopolitan.com. ‘And I’m a natural redhead. It’s funny because I was made fun of for it so much as a kid.’ 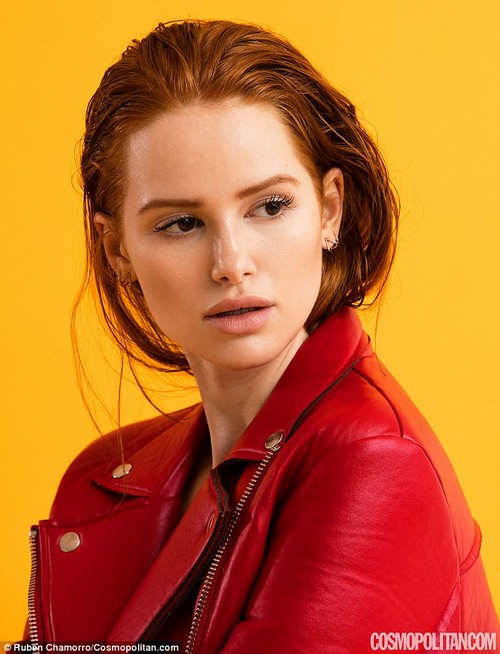 Now and then: Madelaine Petsch’s long red hair has become a point of envy for her fans, but she admits she used to get teased about her vibrant locks as a kid 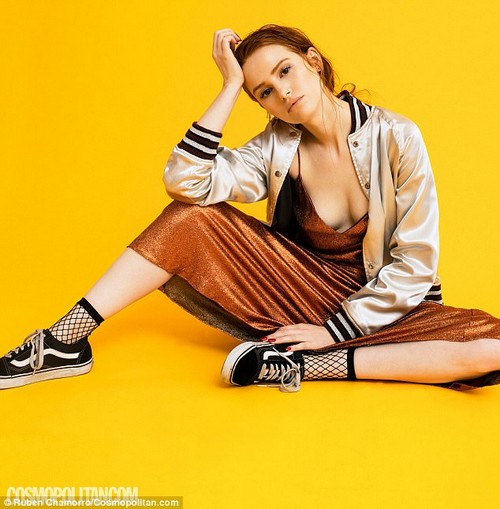 Looking back: The 23-year-old CW star explained that she grew up in a small town where she and her brother were the only two redheads

Madelaine was born in Port Orchard, Washington, to South African parents, and she spent the first ten years of her life dividing her time between Washington and South Africa.

‘I grew up in a small town; I was the only redhead other than my brother,’ she explained. ‘We had South African accents, I was a vegan, I was raised without religion. I was just the weirdest kid in this small town, so I got made fun of a lot for it.

‘My brother got stones thrown at him!’ she added. ‘So now I very much embrace it and want people to know I’m a natural redhead and proud of that.’

Thanks to her rise to fame, people have become infatuated with Madelaine’s appearance, and she took to Twitter in January to hit back at speculation that her perfect pout may be the result of fillers. 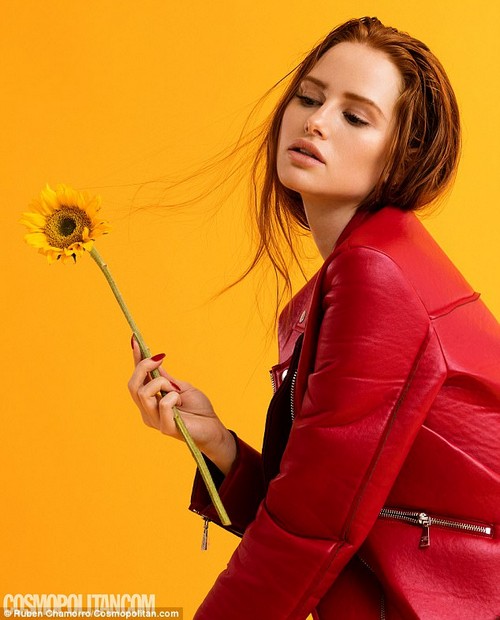 ‘All natural’: Madelaine stressed that she is proud to be a natural redhead, noting that fans often ask if her hair color is ‘real’ 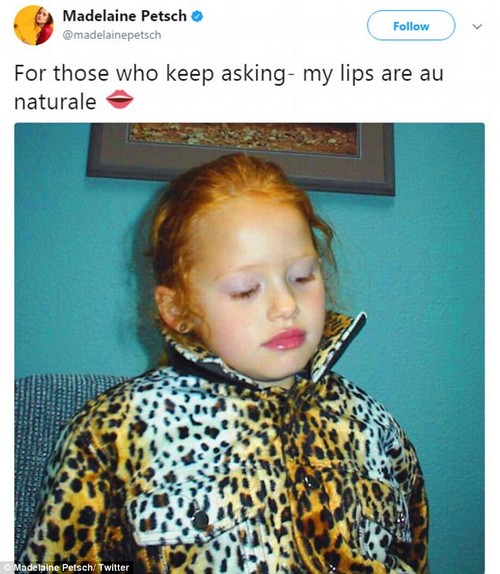 Hitting back: Madelaine took to Twitter in January to hit back at speculation that her perfect pout may be the result of fillers 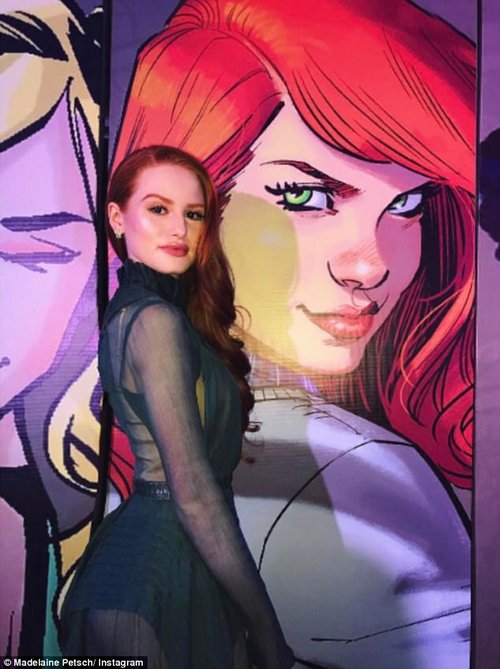 Sharing a photo of herself sporting equally plump lips as a child, Madelaine wrote: ‘For those who keep asking – my lips are au naturale.’

Ironically, after years of being bullied, Madelaine has gone on to play a mean girl on TV, but she insists that deep down her character wants to be friends with Archie, Betty, Veronica, and Jughead ‘more than anything’.

‘She’s just got so many walls up and so many defense mechanisms that it’s impossible for her to find a way to be vulnerable and tell them that,’ she explained of Cheryl.

Madelaine also hinted that her character will be getting an ‘unexpected love interest’ in the show’s second season, which premieres this week. 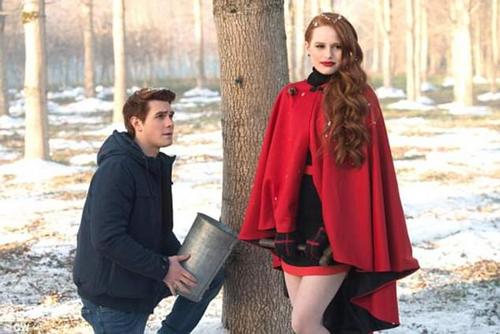 Fiery character: After years of being bullied, Madelaine has gone on to play a mean girl on Riverdale 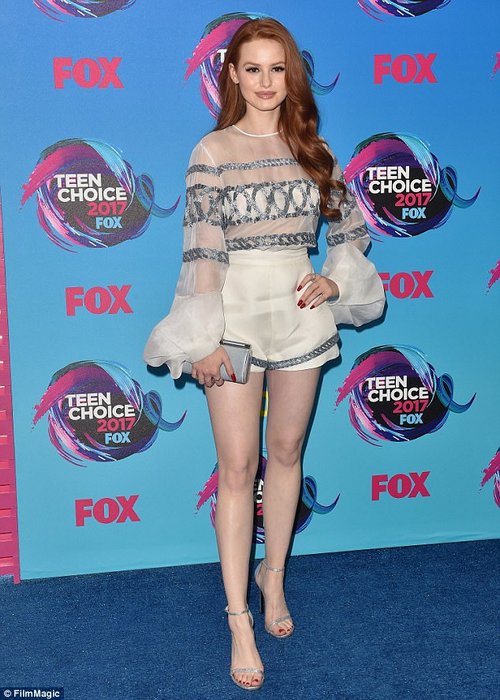 Things to look forward to: Madelaine said her character will be getting an ‘unexpected love interest’ this upcoming season of Riverdale 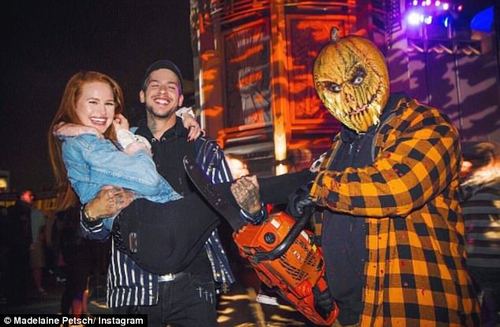 Look of love: Madelaine also revealed that her boyfriend, Travis Mills (pictured), auditioned for the role of Jughead, which later went to Cole Sprouse

As for her own love life, the star’s boyfriend, actor and musician Travis Mills, actually auditioned for he role of Jughead. While the part went to Cole Sprouse, Travis ended up winning Madelaine’s heart.

‘He messaged me on Facebook in January of season one and congratulated me on the show,’ Madelaine told Cosmopolitan.com. ‘He had auditioned for Jughead. I think we just randomly had mutual friends, so we added each other.’

After they became friends on social media, Travis texted her one day when she was bored and asked if she wanted to go see a movie.

‘We hung out and spent every single day together that I’ve been in L.A. since then, since February,’ she said.

You do not satisfy me

Sabrina The Teenage Witch reboot will bring back Harvey