Broadcaster Samira Ahmed has slammed fashion label Jaeger for describing women’s trouser pockets as being ‘handy’ – for when ‘your boss decides they want four lattes.’

The BBC presenter, 49, took to Twitter to criticise the comment, writing that ‘attitudes to working women seem to have been reset to the 1950s.’

The description appeared on the brand’s website in relation to their £110 Wool Narrow-Leg Trousers, but has since been taken down.

It read: ‘The side seam pockets will be as handy as ever when your boss decides they want four lattes and you have no hands free for anything else.’ 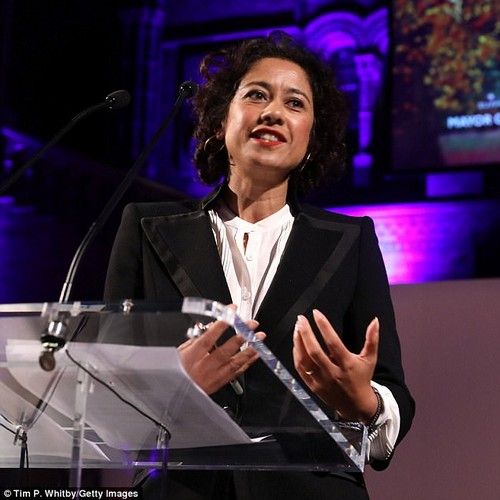 Posting a screengrab of the offending comment, Samira wrote: ‘Dear @JaegerOfficial if you want adult women to buy your clothes you might want to raise your assumptions about what they do a little higher. Seriously, who wrote this?’

She continued: ‘Attitudes to working women seem to have been reset to the 1950s.

‘Surely it’s only bought by 35+ women. Probably much older. Once had a classy heritage brand reputation. Bizarre to patronize the only customers who might have stuck with you.’

The broadcaster later commented: ‘They were quite nice trousers, too.’ 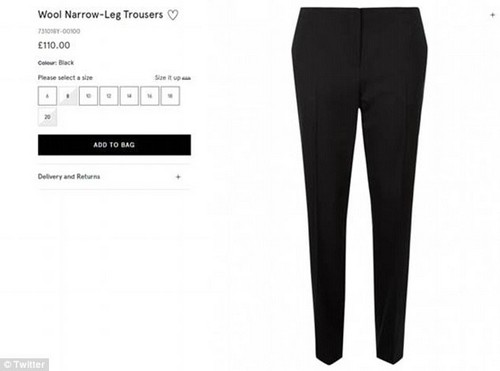 The comment appeared on the brand’s website in relation to their £110 Wool Narrow-Leg Trousers, but has since been taken down

The BBC presenter, 49, took to Twitter to slam the description, questioning ‘Seriously, who wrote this?’ She added: ‘Attitudes to working women seem to have been reset to the 1950s’

Other Twitter users also expressed their outrage over the description, with some branding it as ‘patronising’ and ‘sexist’.

One person wrote: ‘Bloody hell, that’s appalling. Historically, with a focus on classics, I’d have thought it was the boss who wears Jaeger. Patronising, much?’

Another questioned ‘Are people really saying this in the 21st Century? Really?’.

Meanwhile, others were left confused by the wording of the description.

Other social media users were also left outraged by the description, calling it ‘patronising’. One asked: ‘Are people really saying this in the 21st century?’

One commented: ‘Besides the general stupid misogyny of this, I’m trying to work out what the hell it actually means. How would pockets help with lattes???’

‘We apologise for any offence caused. Jaeger uses a third party to write copy. We are investigating this matter.’

A spokesperson for Jaeger said in a statement: ‘Jaeger has recently come out of an administration process and we are working through product descriptions which were issued by the old Jaeger business.

Others suggested it was ‘sexist’, while some were left rather confused by the way the description was worded

One Twitter user suggested they ‘could just easily have same text in an advert for man’s jacket’. But one woman responded that ‘it would never enter their head to do so!’

‘Samira Ahmed’s tweet has highlighted that our product descriptions are hugely out of date.

‘At Jaeger, we pride ourselves at being able to deliver a sense of cultured style, nevertheless, clearly – some of our product descriptions do not reflect this.

‘In light of this, we are reviewing product descriptions and will be investing significant time in which to rectify some out-dated content with immediate effect.’

The statement continued: ‘Jaeger values all of our customers and has taken these comments very seriously.

‘Thank you to Samira Ahmed for bringing this to our attention and we apologise for any offence that may have been caused.’