A Melbourne-based playground has come under fire online, after parents criticised it for being ‘dangerous’ and not ‘very suitable for all ages’.

Worried parents took to the Waverley Gardens Shopping Centre Facebook page this week after a picture of the playground sparked controversy.

‘The playground isn’t very suitable for all ages. It’s quite dangerous,’ one mother wrote on the Facebook page.

‘I’ve seen several kids tumble trying to climb the rope structure to get to the slide and many little ones crying because they can not climb the ropes to access the slide.’

The shopping centre’s Facebook account said that they designed the new playground to be inclusive of all ages, but unfortunately there are many who disagree with this statement.

‘Thanks for the new playground but I agree it’s not suitable for all ages,’ another mother commented.

‘My two and five year old didn’t enjoy it at all and couldn’t do much. And can we have our enclosed fence and gate back please?!’.

‘Thanks for the new playground but I agree it’s not suitable for all ages,’ one mother commented 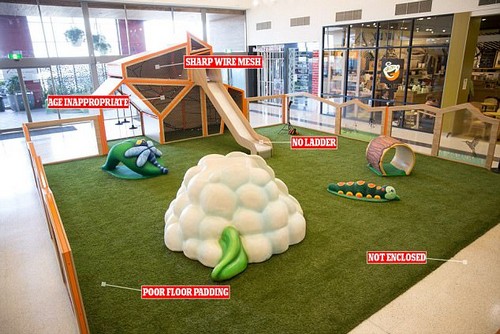 Some of their concerns are that there is no ladder at the slide, it is not fully enclosed, the wire mesh is sharp and there is insufficient floor padding

Although many were thankful that Waverley Shopping Centre had tried to cater to young families with the playground, others commented saying it missed the mark.

‘It’s fantastic that Waverley Gardens’ centre management went to the effort of installing a great new playground and all the renovations so far have been great,’ another person wrote.

‘However, it’s pretty clear there was no safety ‘risk assessment’ report done on this play equipment before purchase.

Although many were thankful that Waverley Shopping Centre had tried to cater to young families with the playground, others commented saying it missed the mark

‘The wire mesh everywhere is sharp and dangerous. The climbing ropes are only suitable for 5yo sic and up (not 3yo+) sic,’ they continued.

‘However there is insufficient floor padding underneath them, so if a child falls trying to get into the upper hole to access the slide they will get injured.’

As well as concerned adults sharing their frustrations with the play centre and the design flaws, there are also parents discussing the injuries their children have faced.

‘My 5 year old son who is quite tall for his age was tangled up in the ropes and it caused bleeding and bruising,’ one concerned mother wrote.

‘I won’t be letting my kids play on it again. Such a shame, I grew up at wavos sic.’

While another said: ‘Its a playground… not kinder!! Watch ur kids… or move on! I mean… I remember coping bruises etc when i was young playing…i think people these days are just plain fussy…we dont live in a perfect world..so deal with it! Thanks wavos for the free entertainment for my children.’

Waverley Gardens’ centre management on Facebook said that they were grateful for people’s feedback.

‘All your concerns are currently being considered with the view to make some enhancements which we hope will improve the play area and overall experience,’ they commented.

‘The idea behind the playground was to provide an updated and engaging space for a wider age group of children with all abilities in mind.

‘The playground has been checked at both design and installation stage by an Independent 3rd Party Safety Certifier to ensure a safe and pleasant experience for everyone.’

At the time of writing, the post sits with 98 comments and 100 reactions.