After weeks of cryptic teases, Season 6 of Fortnite is finally underway on PS4, Xbox One, PC, Nintendo Switch, and mobile, and it has brought some big changes to the popular battle royale game. On top of new locations around the map-not to mention a slew of fresh skins and other cosmetics to get your hands on-Season 6 has introduced a new category of items we never knew we wanted: Pets. 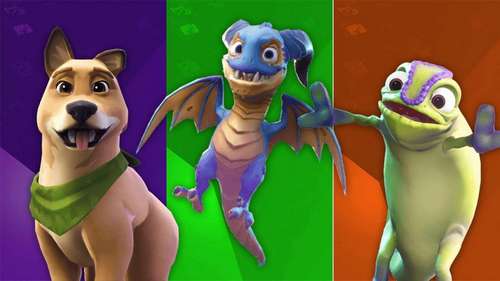 Among the many new rewards you’ll be able to unlock with the Season 6 Battle Pass are Pets, adorable companions who’ll accompany you as you play. Much like Back Bling, these little guys are worn on your back. They don’t have any practical uses-they’re purely cosmetic, as with all Battle Pass rewards-but they look cute, and they’ll react differently depending on what you’re doing; leap a great distance, for example, and they’ll hang on for dear life.

Which of the new Fortnite pets is your favorite?

Three different kinds of Pets are available thus far, and they’re available in multiple colors: Bonsey, a dog; Scales, a baby dragon; and Camo, a chameleon. You can see images of them, along with all of the other new cosmetics and skins you can get your hands this season, in our complete Season 6 Battle Pass rewards gallery.

In addition to the Pets, Epic has introduced a load of new skins in Season 6. Some of these, such as the DJ Yonder and Calamity outfits, we previously got a glimpse of in the teaser images Epic shared leading up to the new season, but there is also a new Red Riding Hood skin and other loosely Halloween-themed rewards to unlock.

Season 6 arrived alongside Fortnite’s 6.0 patch, which vaulted several weapons and made tweaks to various others. It also introduced a new type of consumable item called Shadow Stones. You can read more about the new changes in the 6.0 patch notes. You can also find tips on all of the new challenges available thus far in our complete Fortnite Season 6 challenge roundup.