Electronic Arts’ latest excursion into basketball simulation – NBA Live 19 – arrives today on PS4 and Xbox One. Developed by EA Tiburon, this iteration in the basketball franchise brings back the ability for players to take on the role of a high school basketball star and become «The One». 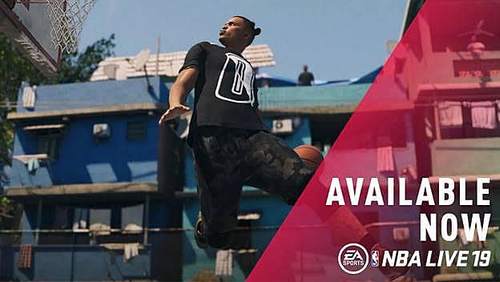 While chasing the dream to become an all-time basketball icon, the game introduces the next evolution of «The One» system, challenging players to compete for the right to play alongside iconic basketball superstars and build their perfect squad.

Players can create their very own character from the ground up, and in a change of direction for the series, NBA Live 19 also includes the ability to create and customize female players.

In addition, the new Court Battles feature adds another level of competitive depth, offering players the chance to achieve global dominance (check out the trailer below for more on this feature).

Sean Graddy, Executive Producer of NBA Live 19, had this to say about the newly released title:

NBA Live 19 brings a truly unique basketball experience to all players at any skill level. The team added a variety of new features which aims to deliver a whole new level of depth and customization beyond any previous NBA Live game to date. We cannot wait for players to dive in and try out all the new content for themselves.

Players can take their game to The Streets while still dominating The League, a modern take on a basketball career progressing across global courts and the NBA.

For the mobile crowd, a new season of NBA Live Mobile also just launched on September 5 to coincide with the release of NBA Live 19. In this newly added season, players build a team of current stars and favorite legends. Check it out on the App Store and Google Play.