Red Dead Redemption 2 lets you fish, and it’s a robust, enjoyable, and rewarding pursuit that’s a perfect for the game at large. It’s also somewhat involved, so we’ve put together a guide to help you learn the basics, so you can quickly start to catch fish and have a fun time. This guide also goes into depth on the different types of fish in the game and where to find them, while we’ve also provided a the map to help you find all 13 of the game’s Legendary fish.
Starting off, fishing in Red Dead Redemption 2 is unlocked by playing the Chapter 2 story mission «A Fisher Of Men,» in which you teach young Jack Marston to fish. You take little Jack down to the river for a fishing lesson, and this serves as your introduction to the system. 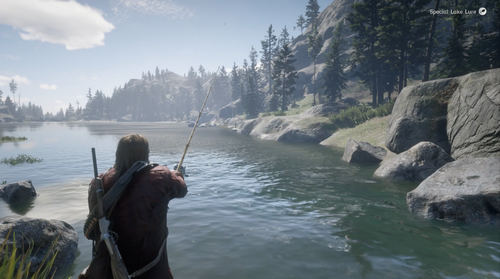 The first step is to select your Fishing Rod from the Items menu. Next, you must attach bait to it, and this is divided into two categories: Bobber and Lure (more on that later).

Hold LT/L2 to grip the rod and then RT/R2 to cast. How long you hold down RT/R2 will determine how far the cast goes. It might take you a few times to get a feel for it, but it’s rewarding to land a cast precisely where you want it. Once you’ve cast your line out, what happens next depends on the bait you used. With a bobber, all of you have to do is sit and wait to get a bite You can tap RT/R2 to attract a nearby fish (if you’re standing close enough to shore you might even see the fish in the water), but do it too much and you’ll spook them. With a lure, you have to reel in until you feel a bite. If you see a fish, cast beyond it and reel in the lure so the fish sees it coming by. Be sure to wait until you feel a strong bite before «striking»-with a bobber or a lure-as fish will often nibble a few times before biting down the hook. Once you’ve landed a fish, the real work begins.

The fish will immediately pull back, and you’ll feel your line get tight, with your rod bending in reaction to the tugging. Wait until the fish becomes tired before reeling in; trying to reel as a fish is tugging will cause your line to break. With a fish on the line, push the left stick in the opposite direction the fishing is moving to tire it out faster. You can also click in the right stick and push it in any direction to prevent the fish from taking more line out. However, you must be careful with this approach as you can snap your line very easily. You will also snap your line if a fish pulls away and gets behind a rock or other object.

You reel in by rotating the right stick counter clockwise. You’ll want to reel in as fast as possible when the fish grows tired, while also being mindful of how much line you have out, how taut the line is, and where the fish is in the water. Pushing the left stick down as you reel in speeds up the process because it brings the fish directly in towards you. I found it was helpful, if not a little embarrassing, to use my thumb and index finger at the same time to reel in even faster.

The amount of fight a fish puts in is directly related to its size and type. You’ll be able to reel in smaller fish such as bluegills, rock bass, and smallmouth bass with relative ease. But catching larger fish, like Sturgeon and Sockeye Salmon, can entail fights that take multiple minutes to complete. If you snap your line, you’ll lose your bait or your lure, but don’t get discouraged as they are plenty of fish available in Red Dead Redemption 2’s numerous lakes, rivers, and swamps.

Just like in real life, selecting the right bait is critically important if you want to reel in a big one. You can purchase basic bait types like bread, corn, and cheese, or spend more money on worms and crayfish that help you land bigger fish. There are also lures specific to rivers, lakes, and swamps, as well as «special» lures that you’ll need to catch the biggest fish and the Legendary ones. Here is a rundown of the bait types we’ve come across so far. 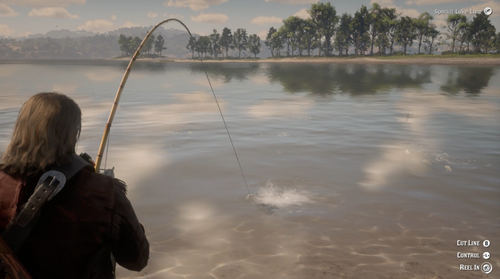 Types Of Fish And What To Use To Catch Them

There are many different types of fish that can be found in Red Dead Redemption 2’s lakes, ponds, rivers, and swamps. Here are the ones we’ve caught so far, as well as the bait type that provided the highest likelihood of reeling them in successfully.

The time of day matters if you want to have the best success fishing. Early morning and afternoon are when fish bite the most, due to bugs flying close to the surface. You should also try to fish when it’s raining, because the drops on the water make fish believe bugs are around.

Where To Fish And Specific Conditions

To find the fish you’re after, you’ll have to fish in the right spot. Here’s a rundown of the locations where we’ve found the following fish.

One further note is that fish, particularly bigger ones, loooovvvvve to hang out at the mouths of waterfalls, as the water there is more oxygenated than other areas. Try there if you’re struggling.

Head to the shore of Flat Iron Lake in the Heartlands to a place called Gill Landing. Here, you’ll meet a stranger named…Gill, who is a world-renowned fisherman, or at least that’s what he wants you to believe. He’ll hand you a map with the locations of 13 epic-sized fish you’ll find throughout the game. Snag them all and report back to Gill for your prize. These are indeed mighty fish, so expect the toughest fishing battles the game has to offer. You will need to use the «special» lures mentioned above to bag these big ones. The best advice I can give is to try to catch them when they’re already close to shore, so as to cut down on your reeling time significantly and improve the odds of landing the fish. Here’s the map: 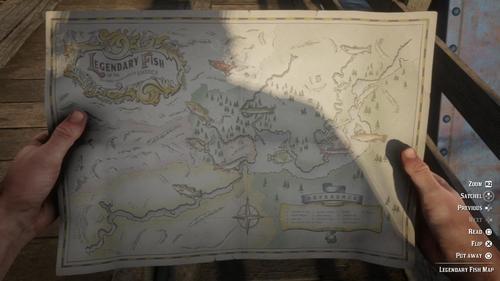 Watch Out For Goats

There are unpenned billy goats throughout Lagras that can cause problems while fishing. On multiple occasions, I was fishing near the swamp and a goat smacked me in the rear, breaking my fishing line while I was reeling in. It was frustrating, and I thought it might have been a bug. But it happened three times, so the lesson here is to watch out for goats while fishing in Lagras.

At a certain point a few hours into the game, you will steal a boat and bring it to camp. At this point you can use it to head further into a lake to go after the bigger fish that tend to live in deeper water. You can also steal boats you find on your journey to fish anywhere you’d like.

Red Dead Redemption 2 has snowy, cold locations with frozen lakes and ponds, and one of the Legendary fish is located in a lake that is partially frozen over. However, there doesn’t appear to be any true ice fishing where you drill through the ice and drop a line in. Here’s to hoping Red Dead Redemption 2 gets the guaranteed-seller «Ice Fishing Expansion» down the road… 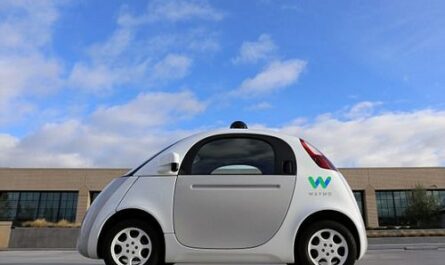 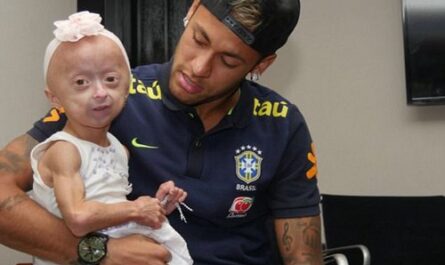