Well, war has certainly changed. Fallout, the RPG series with a 20-year legacy, finds its latest entry taking another chance at braving a new direction: online multiplayer. It puts a major focus on cooperating with other people in a world with perpetual activities that seek to sustain your engagement indefinitely. It’s an enormous game and there’s a lot to see. Because of its online nature, GameSpot staff got access to the full version of Fallout 76 on the day of its general release, so we’ve been playing alongside you and everyone else.
At the time of writing, I’ve spent three modest days with Fallout 76, leisurely soaking in the world, churning through quests, and cooperating with both friends and strangers to do quests, participate in public events, and explore. I’m a series-long Fallout fan who’s enjoyed every mainline entry and avoided 76’s beta tests with the intent of making sure my first taste was of the launch product. I’m compiling my early thoughts here and will be updating my opinion with a finalized review once I’ve taken enough time to dive deeper and see the breadth of what Fallout 76 has to offer.

Fallout 76 feels like a game without a strong focus. It makes changes to the time-tested structure seen in Fallout 4 to make it function as both a single-player and multiplayer experience. But in doing so, both styles of play suffer from major compromises that exist only to serve the other, and as a result, neither is exemplary.

You and everyone else is cast a dweller of Vault 76, an underground bunker filled with overachieving, competitive people tasked with rebuilding the world after a nuclear apocalypse. That time is now, and upon leaving, you also discover that the vault’s overseer has undertaken a personal mission. Finding her becomes your overarching pursuit as you enter the vast remains of a scorched world where unknown beasts roam and every other human being is a real person playing the game.

Fallout 76 has no artificial human characters to interact with. The justification is that because the dwellers of Vault 76 are among the first to reenter this devastated America, there are very few coherent beings, and many of the folks who survived nuclear annihilation died before your arrival. Without established characters to populate the world, the vibe of Fallout 76 is an eerie one, frequently amplifying one of the series’ great strengths: the feeling of desolation. There’s a curiosity about the environment that drives you to veer off the beaten path, visit places that once were, attempt to imagine what life might have been like before everything went to hell, and what’s happened there since. Exploring the wasteland remains one of 76’s most enjoyable aspects. 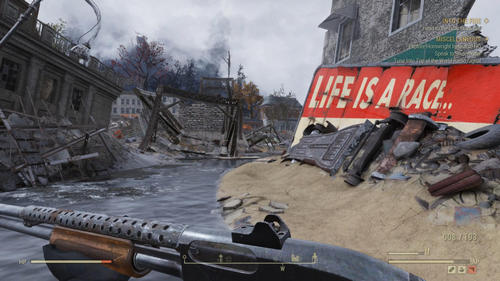 But the lack of inhabitants is also Fallout 76’s biggest problem, and it limits the world to being little more than just an environmental showcase with things to kill. It means that the art of conversation, a fundamental series feature, is disappointingly absent. But more critically, it means there are no strong emotional anchors to help you become truly invested in the world, a complication that diminishes the game’s other core activities.

The biggest victim is the quest system. Without actually having people with needs and desires, initiating and undertaking quests frequently involves the use of environmental storytelling tools-listening to audio logs, reading notes, and browsing through computer terminals for key information. A quest will often explore the stories of certain characters, but they’re characters that have long since passed, and all you get are long monologues and one-way directives from a person who no longer exists and you can’t interact with. Your actions ultimately won’t affect anyone, or the rest of the world for that matter-everywhere you go gets reset with items and enemies regularly-and staying motivated becomes an issue after an extended period.

Some of these stories are intriguing to be sure, and when you come across a tale about a character who piques your interest, you get excited to find out more about their last living moments. But there’s such an over-reliance on having disembodied voices talking at you for every aspect of the game that it’s easy for these standouts to become lost. The lack of a more relatable and personal connection between your actions, the world, and its inhabitants means that it’s easy for quests to feel like meaningless wild goose chases. It makes the idea of going straight into another quest-listening to more audio logs, running across the country to search for more doohickeys, reading through more diary entries-feel exhausting.

Fallout 76 also feels like it has fewer opportunities to complete quests in your own unique ways at this early stage, which exacerbates the sense that you’re having little impact on the wasteland. Lockpicking, hacking, and stealth abilities remain in 76, which provide a little bit of ability to choose how you solve problems. But the quests we’ve played so far all feel like they have linear throughlines to the goal. Exploring the world’s quieter, idle set pieces at your own pace remains the more rewarding narrative experience. 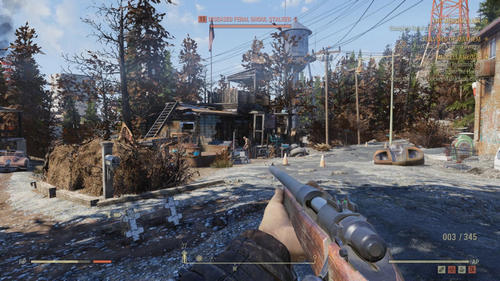 The reliance on things like audio logs and written notes also proves to be the biggest deterrent to playing Fallout 76 in multiplayer. By teaming up, you can explore the world together, get help in taking down difficult enemies, and complete any quest, but certain things are kept distinct to each individual player’s experience. Containers that hold items, for example, will have unique loot for each person who opens them. But what’s also unique is that quest objective completion is not shared, and every member in your squad needs to activate things personally to have them count toward their progression.

This is a great idea on paper, as it makes sure everyone sees each piece of a story themselves. But in playing with both good friends and strangers, I found that each person’s individual need to advance quests severely hinders the flow of the progress. Because of the need to wait for your squad to catch up, have each member take their own time to listen to important tapes (which is impossible when you’ve got voice chat going) and search terminals for pertinent information, questing in multiplayer requires a lot of patience and courtesy. Add to that the fact that Fallout is already a game that encourages constant, time-consuming gear management which penalizes your movement speed for being over-encumbered, and the idea of having another squad member just feels like an additional burden.

If you have a squad that is happy to skip the narrative content things will go much more smoothly, but then you’re denying yourself the one vector that gives these quests context. Multiplayer is more enjoyable when you and your squad are just content to leisurely explore the world, scavenge for items, and get into scrapes. Questing solo has its own obstacles too-packs of enemies will often have a handful of foes that are 10 or 20 levels above you-but not needing to wait around is definitely a big advantage. 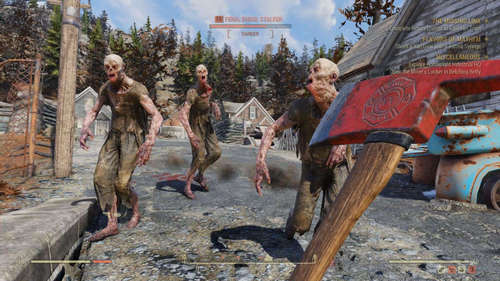 Fighting enemies also doesn’t feel that meaningful in 76, a more morbid consequence of the lack of in-universe characters. Appalachia is filled with an assortment of delightfully mutated creatures both new and old, including humanoid enemies like the Scorched and Mole Miners who can wield firearms. But it isn’t as entertaining to take on enemies that haven’t wronged you or anyone you know. Without sadistic raiders and their despicable actions to be appalled by, interesting gang factions to get on the wrong side of, or being able to understand how this particular brand of super mutants came to be, the hostiles you encounter in 76 just feel like cannon fodder.

The combat mechanics don’t deal well with a lot of cannon fodder, either. Appalachia is filled with dozens of public events that invite everyone on the server to gather and participate in a unique task tied to a particular location. From the dozen or so I’ve seen so far, these largely boil down to escort and defense missions that ask you to hold back multiple waves of enemies. Fallout 76’s combat system is mostly unchanged from Fallout 4 and is serviceable enough to make small skirmishes with either firearms or melee weapons feel good. But the system is not so good that shooting hordes of enemies for 20 minutes in an event feels like anything other than a chore-the gunplay and movement are not satisfyingly responsive or kinetic enough to make them enjoyable for long periods.

That’s also partially due to the change in VATS. What was once a strategic pause-style ability that let you target body parts and take time to assess your surroundings is now a real-time auto-aim system that allows for additional damage, a change presumably made for multiplayer. It serves its purpose in being able to make precision hits on limbs when the action is manageable, but in more intense situations VATS does little to make up for the limitations of the real-time combat system as it once did. 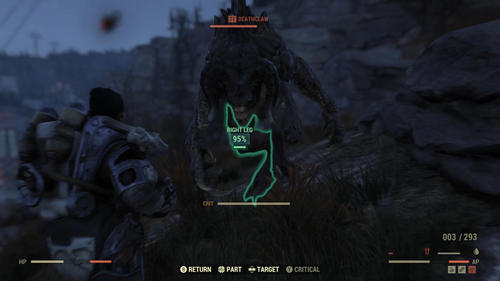 Fallout 76 also falls victim to the series’ now characteristic penchant for technical bugs. Whether caused by the game engine or the online nature of the game, I’ve run into a number of technical oddities in the PC version. Problems like clipping through the world, frozen animations, entire buildings failing to load, enemies getting stuck in walls, audio logs not playing, enemies spawning out of mid-air, losing control due to unstable server connections, and being unable to turn in quests due to unresponsive prompts are just some examples.

Some of the changes in Fallout 76 are wholly positive, though. The straightforward but satisfying base-building component carries over from Fallout 4 and plays a bigger part in 76. A few smart decisions, like the ability to move your base camp for a trivial fee and the ability to save blueprints of entire structures for easy placement elsewhere, makes building complex camps a pleasant and fulfilling activity. The game’s unique take on player-versus-player competition is effective at deterring unprovoked attacks when exploring the world, too-it’s a lot of work for little reward if your target doesn’t retaliate. The flexibility of the new perk system (which is now card-based) allows you to change your abilities at will, which has encouraged me to use of Fallout’s weirder skills, depending on my situation. 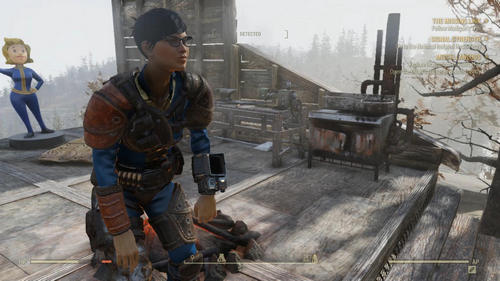 Fallout 76 attempts to pull off some significantly new ideas for the series, but with few exceptions, they notably diminish many aspects of the game. Multiplayer is fun, but it’s not an ideal way to enjoy questing, and the shooting mechanics aren’t strong enough to make combat-heavy activities enjoyable for long periods. Things feel better as a solo experience, but the lack of in-universe characters makes becoming emotionally invested in the world and your goals difficult.

I’ll continue to play the game with the intention of finishing the campaign, a good portion of the side quests, and getting involved in end-game content. This review will be updated and finalized when all that happens. But at this early stage, I feel like the only reason I’m enjoying the game as much as I am is because of an existing fondness for the Fallout series, not because of anything that can be distinctly attributed to Fallout 76. 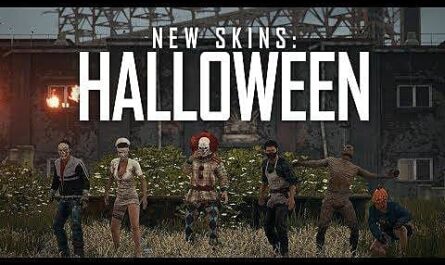 Developers Give Behind-the-Scenes Look at The Quiet Man