The aforementioned Wolf, Ridley, and Inkling figures are launching alongside the game on December 7. King K. Rool and Ice Climbers Amiibo will follow next year on February 15, while figures of Young Link, Daisy, Pichu, and newcomers Isabelle and Ken will all release sometime in 2019.

Nintendo is releasing a new line of Amiibo for each of Super Smash Bros. Ultimate’s new and returning characters. We’ve already gotten a look at figures of Wolf, Ridley, and Inkling, and during the final Super Smash Bros. Direct presentation, Nintendo revealed another handful of Amiibo and when they’ll arrive.

On top of those Amiibo, Nintendo announced it will release a figure of the surprise DLC character Piranha Plant, which game director Masahiro Sakura says has a «nice curved form to it.» The Piranha Plant Amiibo is likewise launching on February 15, while the character itself is slated to join the game «around» February.

In addition to the new figures, Super Smash Bros. Ultimate will be compatible with all existing Smash Bros. Amiibo. A number of these figures will be re-released near the game’s launch. However, as before, some will only be available at certain retailers. The reprinted Pac-Man Amiibo, for example, is exclusive to Best Buy stores.

We learned a ton more details about Super Smash Bros. Ultimate during the game’s final Direct presentation, including who the last two characters on the base roster are: Street Fighter’s Ken and Pokemon’s Incineroar. Nintendo also announced its DLC plans for the game and shared some new information on its Spirits and Adventure modes. You can catch up on all the biggest news from the broadcast with our Super Smash Bros. Ultimate Direct roundup. 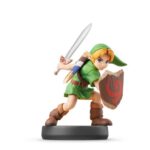 Smash Bros. isn’t the only upcoming Switch game to receive Amiibo. Blizzard also announced a Loot Goblin Amiibo figure for Diablo III: Eternal Edition. This figure is notable for having a unique design and packaging than other Amiibo, and it’s available exclusively at GameStop.