At BlizzCon this past weekend, Blizzard announced a brand-new Diablo game-but it wasn’t exactly what fans were expecting or hoping for. 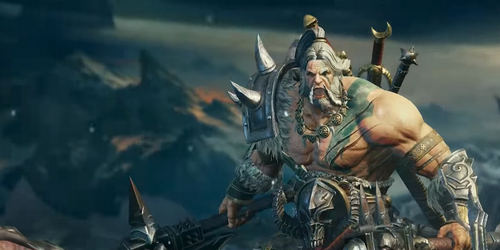 Diablo Immortal is a new Diablo game for mobile devices that Blizzard is developing alongside partner NetEase. Even though Blizzard told fans weeks ahead of BlizzCon that they shouldn’t expect an announcement of the next mainline Diablo game at the show, a reveal of a new mobile game wasn’t the kind of surprise some were hoping for. The next big Diablo game-potentially Diablo 4-is likely in the works, but Blizzard said nothing about it at BlizzCon.

We caught up with Blizzard’s Wyatt Cheng (principal game designer) and Joe Hsu (senior game producer) at BlizzCon to talk about the announcement of Diablo Immortal, the reaction to it, and more.

Cheng started off by explaining that Diablo Immortal is coming to mobile because the franchise is already well represented on console and PC; the next area of expansion is the growing mobile market, he said.
«At the end of the day, at Blizzard, we’re gamers,» Cheng said. «And we play a ton of games on all platforms, console, PC. We play board games. We play card games. We just play games, and a lot of us play mobile games. And I think when we look at an opportunity to make an awesome mobile game, we want to take it.»

Blizzard has been working with NetEase for nearly a decade on bringing popular franchises like World of Warcraft, Heroes of the Storm, Overwatch, and another mobile title, Hearthstone, to the Chinese gaming market. Partnering with NetEase again for Diablo Immortal just made sense, Cheng said.

Another reason Blizzard is bringing Diablo to mobile is because there are more stories in the universe to tell. «We were looking at this 20 year period in between Diablo II, Lord of Destruction, and Diablo III, and we said, ‘All these events happened, so we should take a look at creating a game that explores that space in time,’» Cheng explained.

He added that Diablo Immortal is sort of like the movie Star Wars: Rogue One, which exists in the wider Star Wars universe but can still be watched and enjoyed on its own.

«We love to bring new things to our players,» Hsu said. «For me personally, I still play Diablo III. I play the Seasons, and that is awesome experience, but I would love to try new things, and we would love to share that with everyone. And it’s such a rich IP where we can do that, so it was a good choice. I feel like it was a very good choice.»

Some amount of the conversation around Diablo Immortal has been negative. As mentioned, a portion of the fanbase was hoping to see the next big Diablo title instead of a mobile game. Hsu said he hopes people give Diablo Immortal a shot first before judging it.

«We really believe playing is believing, and we would love it if everyone everywhere gets to try it out and give their honest opinions,» he said. «That would be amazing.»
Being skeptical is perfectly fair and reasonable, Cheng said, but he still hopes people stay open-minded about Diablo Immortal.

«I think that’s reasonable in today’s world, our modern world, to be a little skeptical,» he said. «But then for the people who play it, if they can go out and say, ‘No, no, no, seriously, guys. I was at BlizzCon. I played the demo. It was awesome.’ Hopefully that word of mouth spreads.»

Blizzard co-founder Allen Adham told Kotaku that the company expected fans to get upset about Diablo Immortal, but not on the level that eventually came to bear. There was also backlash when Blizzard announced Diablo for consoles and fans also got upset about Hearthstone in general being a free-to-play mobile game, Adham said, so pushback is nothing new for the company. All of that said, Adham added that he understands Diablo fans want more.

«We knew our audience here desperately wants to see and hear about one thing in particular,» Adham said, presumably in reference to the next big Diablo game.

You can expect Blizzard to spend a lot of time and attention on Diablo Immortal. Cheng said Diablo for mobile will be the next big core pillar for the Diablo franchise going forward.

«Yeah, I do. I do for sure,» he said. «If we fast forward in 10, 20 years and look back, we’re going to be developing up the lore. And when people paint out the storyline, we have new stories to tell. We have new gameplay. There’s going to be brand new experiences for players in Diablo world.»

Blizzard has yet to disclose the business model for Diablo Immortal, so as of yet it’s unknown if it will be free or paid. Blizzard’s previous mobile game, Hearthstone, is free. It is supported by microtransactions. We asked if Diablo Immortal would have microtransactions, but both Cheng and Hsu said Blizzard is focused more on getting the game right before talking about business specifics.

No doubt another one of the reasons Blizzard is bringing Diablo Immortal to market is because of the business opportunity. Smartphones are ubiquitous, and the microtransaction model-especially in China-is common and generally accepted. Parent company Activision Blizzard made $4 billion from microtransactions last year, and stakeholders are surely eager to see this figure grow higher still.

One other matter surrounding Diablo Immortal is the accusations that it is a re-skin of the game Crusaders of Light, which is another title from NetEase. Asked directly to respond to the re-skinning claims, Cheng told IGN: «We have artists on our side, they have artists on their side, and we work together as a team, as a partnership to create everything about Diablo: Immortal. The environments, the characters, the skills, the story.»

GameSpot spent some hands-on time with Diablo Immortal at BlizzCon, so keep checking back soon for more.