In only a few hours playing Just Cause 4, I had summoned an electrical storm to blow up an enemy base (as well as some nearby unsuspecting cows), turned a monster truck into deadly spinning airship, and been thrown hundreds of feet by a tornado after riding it using a wingsuit. I also managed to get struck by my own summoned lightning on more than one occasion-retribution, perhaps, for those cows.

Just Cause 3 was notable at its 2015 release for the amount of creativity and chaos you could create within it-indeed, that was the point. During a hands-on preview for Just Cause 4 in Los Angeles, developer Avalanche Studios demonstrated just how much it has turned up the dial on your capability to wreak goofy, physics-based havoc in its upcoming sequel. Between new, huge weather events and a toolkit for making things move, fly, explode, and snap together, there’s plenty of fun to have in seeing how ingeniously you can combine its many intricate systems, and use them to blow things up. 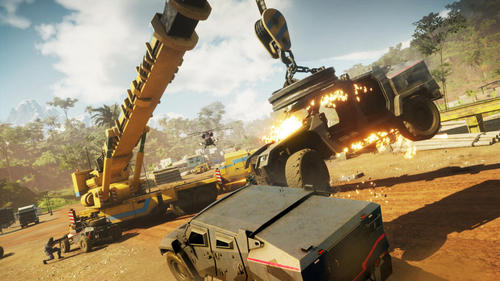 The big driver of the creativity in players’ hands in Just Cause 4 is the expanded grappling hook carried by protagonist Rico Rodriguez. Not only does the grappler still let you zip around the game world or tether objects to make them smash together, you can now add inflatable balloons and tiny rocket boosters to objects, and in greater numbers than in Just Cause 3. There’s also a new loadout menu that lets you define a bunch of parameters about said tethers, balloons, and boosters-like how much lift your balloons have, whether your rockets explode when they run out of fuel, the speed at which your tethers retract, and more. You can flip between loadouts instantly, making it easy to add balloons, rockets, and tethers one after another.

All of that means you get unprecedented control over your grappler abilities, which encourage you to make Minecraft-like contraptions using the physics of the Just Cause 4 world. After taking a monster truck for a spin down the highway, crushing all cars in my path, I hooked it up with some balloons and boosters and turned it into a flying, semi-controllable monster airship.

Of course, poor planning and a misunderstanding of remedial physics caused the truck to spin end-over-end at speeds that probably would have liquefied poor Rico’s internal organs, but once I got the hang of it, I could fly the truck around pretty reliably, then drop it back onto the ground and drive away. You can use those same abilities in combat to do things like turn vehicles into rocket-powered wrecking balls, or just send unsuspecting bad guys floating into the ether for daring to draw down on you. 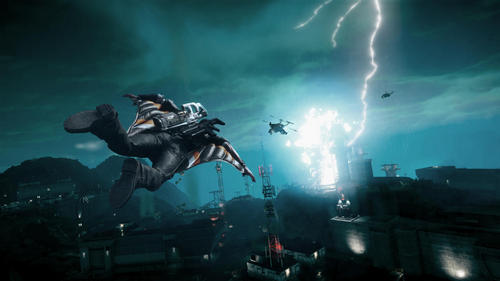 The capabilities and combinations available in the grappler offer a host of possibilities for getting into serious trouble in Just Cause 4, but the game raises the stakes in a second way: extreme weather. Avalanche showed off its in-game tornadoes at E3 2018, which can ravage the countryside, tearing up things like trees, buildings, and people, and there are also lightning storms, sandstorms, and blizzards to look forward to as well.

Weather is something players both have to navigate and that can used to their advantage, but seeing as this is a Just Cause game, Avalanche has also weaponized some of that weather for your enjoyment, in the form of experimental weapons. We tried a Wind Cannon gun that could blast enemies, vehicles, and objects with tornado-force gusts, capable of literally blowing away tanks and even guard towers; a Lightning Cannon that could fire both a laser-like beam of electricity; and a grenade that created a small-scale lightning storm.

That storm, which spanned a pretty large area and saw lots of lightning bolts arcing down all over the place, is a hilarious agent of chaos even beyond what players might plan. Though it was clear the game somewhat prioritizes lightning striking targets like enemies or explosive objects, the lightning will also go after civilians, animals, vehicles, and even Rico himself.

With all those systems at play, it’s a given that players will come up with weird, novel, and ridiculous solutions to problems and ways to make those systems interact. Giving players that freedom is part of what Avalanche is going for-and even if unexpected interactions create bugs or problems, that’s okay, too.

«When you build systems rather than scripting things, you get combinations that you weren’t expecting,» said Hamish Young, lead mechanics designer on Just Cause 4. Young shared a story about how he managed to drive a car into a tornado in the game, which then carried him out over a river. He managed to get enough speed while the vehicle flew through the storm that he exited on the far side of the water and drove off. Avalanche didn’t plan for tornadoes to work as de facto bridges, but that’s the sort of emergent, interesting situations that building interworking systems can facilitate.

«We kind of have a rule, where it’s kind of okay for the game to ‘break,’ as long as it’s funny,» Young said. «We always try to make sure that, we may not cover every possible edge case, but we try to do enough that if it does break, then at least people are having fun.» 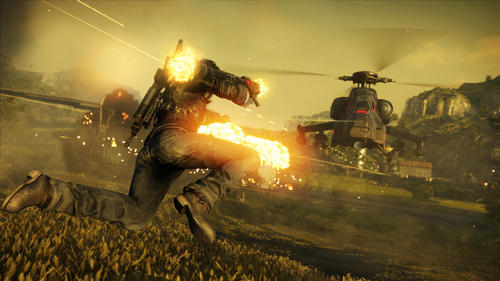 A Different Approach To Story

If there’s a place where Avalanche isn’t doubling down on making things more exaggerated and insane, though, it might be in Just Cause 4’s story. The core, like other games in the series, is that Rico is trying to whip up the people of the game’s setting, an island called Solis, into a rebellion against oppressive rulers. Another motivation, though, is that he’s investigating the suspicious death of his father.

Narrative Designer Ben Jaekle said that with this installment, Avalanche is trying to make its characters feel a bit more realistic, even as they deal with over-the-top situations.

«In Just Cause 4, our approach was to kind of deliver a slightly more grounded experience,» he said. «We kind of wanted to rein in the characters a little bit, and focus on the idea of ordinary, likeable people with heart and intelligence and desires, who are put into a really extraordinary environment where a tornado rips a train off the tracks and throws it at you. So instead of people necessarily making really cheesy jokes about how the train comes flying at you, they might react in a slightly more believable, real way. Which I think makes those moments better, because they feel less cartoony and they feel more real, and therefore more funny. So you’re like, ‘Yeah, I probably would have said that too if a train came flying at my face.’»

Still, if Avalanche’s preview of the game was any indication, there will be plenty of opportunities to fly around Solis, dropping lightning on people and turning tanks into floating death balloons. Just Cause 4 hits PlayStation 4, Xbox One, and PC on December 4.