Treyarch has released a new update for Call of Duty: Black Ops 4. This latest patch makes an assortment of tweaks and fixes across game modes on all platforms, including another round of stability improvements for Zombies, a new multiplayer playlist for PS4, and more. 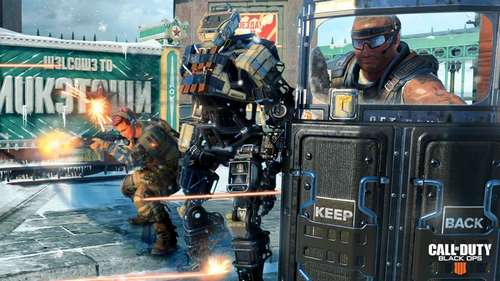 First, Treyarch has introduced the Safeguard playlist to the PS4 version of Black Ops 4. This mode has two teams vying to escort a robot into enemy territory while preventing the opposing side from doing the same. On top of that, the studio has added three other new Featured playlists on all platforms: Hardcore Nuketown, Mercenary Objective Moshpit, and Chaos Hardpoint.

Along with the new playlists, Treyarch has added nighttime versions of two popular maps to the game. Seaside Sunset and Firing Range Night are available now for free for all players in the multiplayer map rotation and will remain in the game «indefinitely.»

For the battle royale-style Blackout mode, Treyarch has added a new weapon: the Bowie Knife. It can be found in equipment stashes or as drops from Zombies, and it allows for «stealthy 1-hit kills» according to the patch notes the developer shared on Reddit. Additionally, the Blightfather event is available once again on PS4, and Treyarch has introduced Character Missions to unlock Dempsey, Nikolai, Takeo, and Richtofen.

Rounding out the update are more stability improvements and crash fixes for Zombies modes. These apply to all maps, as well as a few specific to IX. Treyarch teases that there will be «some exciting additions to Zombies in the coming weeks.» You can read the full patch notes for the update below and on Reddit.

Best Places To Buy The Game