Update New Black Friday deals are coming around the clock, and one such example was Red Dead Redemption 2 for only $45 on Xbox One. That’s unfortunate sold out now, but we’ll continue to look out for additional details as Cyber Monday draws near. 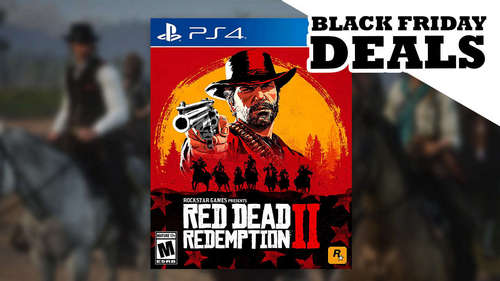 Original Story There are a lot of games on sale this Black Friday, and this includes the recently released Red Dead Redemption 2. Rockstar’s latest-and arguably greatest-open-world title is being discounted at a few select retailers, as well as on online stores, already. Although it’s primarily the more expensive editions of the game seeing a price cut, there are some options available for those looking to experience the wild west epic.

All the current RDR2 Black Friday deals are outlined below. We will continue to add to the list as new discounts are announced. Be sure to stay on top of when specific retailers-like Best Buy and Walmart-open and close their doors for Black Friday so you can plan accordingly.

For now, the best Black Friday Red Dead Redemption 2 deals are available through the Xbox Store and PlayStation Store. The normally $80 Special Edition is being lowered to around $70 for Black Friday. The Special Edition comes with the base game, as well as a bank robbery mission and gang hideout, Dappled Black Thoroughbred horse, talisman and medallion in-game bonuses, boosts, cash discounts, the Nuevo Paraiso Gunslinger outfit, and several free weapons. The even more expensive Ultimate edition drops to $90 on both platforms. As of this writing, you’ll need an Xbox Live Gold membership to take advantage of the Xbox pricing.

Rakuten is offering the Xbox One version of the game for $40 on its website. You’ll need to have an account and ensure you’re logged in first, and then apply the discount code BF20 to see the price drop.

Physical retailers are selling the game at full price but with a bonus item. At Best Buy, the Black Friday deal comes with RDR2 and a special collapsible cup. At Walmart, the Black Friday deal is for the store’s exclusive steelbook edition. Ebay has also announced it will have a bundle with the Xbox One version of the game and Call of Duty: Black Ops 4 for $70.

There’s also a few deals on the original Red Dead Redemption this Black Friday as well. We’ve outlined them below.

Red Dead Redemption 2 is only available for Xbox One and PS4.

Was the Official Name of Far Cry 6, Box Art Revealed in Twitter Leak?