Monster Hunter World is getting a icy-themed expansion, but you’ll have to wait a while before you can break the ice. In a special stream, Capcom announced Iceborne, a massive expansion set to launch for PS4 and Xbox One in fall of 2019. PC release details are to be announced. Presumably, you’ll have to deal with some frigid monsters. 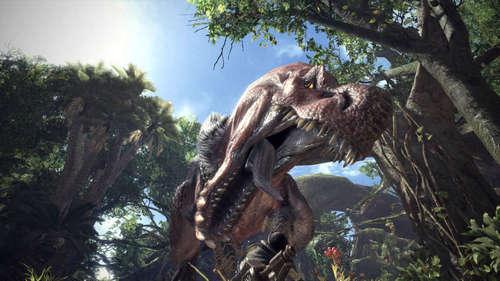 That wasn’t the only Monster Hunter World surprise unveiled on the stream, though. The company also announced Geralt from The Witcher 3: Wild Hunt would be appearing in the game through a collaboration with CD Projekt Red. The presentation referenced Geralt finding himself in the New World, so it will include a new type of Witcher gameplay and even Geralt’s own voice actors. That will come early next year.

If you’re curious about Monster Hunter World but haven’t dipped in yet, you can sample a free trial version of the base game on PS4 and Xbox One for a limited time. The Trial Version lets you play quests up to 3-star level and online multiplayer up to Hunter Rank 4. You can transfer your save data from the trial into the full game. That will kick off on December 12 and end on December 17.

For current players, the special event Kulve Taroth Siege event will come back on December 20. This time the monster will be an Arch Tempered version, offering even better rewards. A special Appreciation Fest event is planned for January 2019, with celebratory decorations in the Gathering Hub and some new quests and gear.

Monster Hunter World recently won Best Role-Playing Game at the 2018 Game Awards, beating out strong competition: Dragon Quest XI, Octopath Traveler, Pillars of Eternity 2, and Ni No Kuni 2.
«Ever since the title was first announced, it was clear that Capcom was gunning for something grander than Monster Hunter Generations,» critic Ginny Woo said in GameSpot’s Monster Hunter World review. «It has succeeded, and this is likely the biggest and best that the franchise has ever been. It’s not just the comparative depth of the narrative; it also boasts almost seamless integration between combat systems that were previously incomprehensible for amateurs. The Monster Hunter formula has definitely honed its claws, and all the above factors play their part in making Monster Hunter World a meaningful evolution for the series at large.»