2018 was a fantastic year for video games, a non-stop hit parade of amazing titles all over the scene-AAA blockbusters, indies, and everything in between. If you’ve got a Windows machine with the right hardware, you’re already in a good position to experience the overwhelming majority of it. The PC has continued to be an outstanding place to play video games in 2018, and with some companies making interesting technological headway this year, it’s also the place where the first steps to the next generation of games are already taking place. 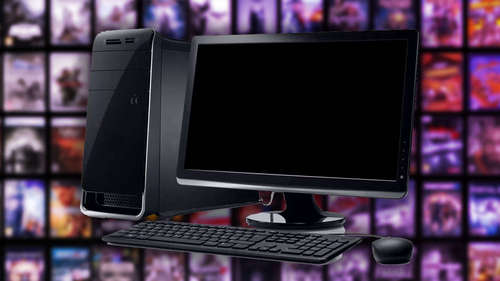 The Walls Between Console And PC Continue To Fall

If you only have a PC, you might find yourself feeling left out when a major console release rolls around. That’s certainly still the case with Sony and Nintendo, but Microsoft’s Play Anywhere initiative, introduced in 2017, continued to see a small handful of Xbox One releases come to Windows 10 as well. The critical consensus was mixed on Sea Of Thieves and State of Decay 2, though both have seen continual content updates since launch. Forza Horizon continued to be a welcome asset though, so we’re looking forward to seeing what Microsoft Game Studios has in store for 2019, especially with its current focus on acquiring major developers.

Meanwhile, Japanese third-party publishers like Capcom and Sega continued to recognize the value of their PC audiences, and we saw more traditionally console-only franchises make the transition to Steam. Ports and remasters of existing games like Yakuza 0, Devil May Cry, Shenmue I & II, and Katamari Damacy appeared, but we also got significant new releases like Valkyria Chronicles 4, and the mammoth Monster Hunter: World, and we also have Devil May Cry 5 and Resident Evil 2 Remake to look forward to. With the higher potential power of gaming PCs, multiplatform titles overall continue to perform better, too, and there were few instances of dodgy PC ports this year. At least, not to the extent of Nier: Automata in 2017.

There was one incredibly notable third-party game that didn’t make its way to PC, however. Red Dead Redemption 2 released to near-universal acclaim in October, but Rockstar hasn’t made any comments about the potential for a PC version just yet. The PC version of Rockstar’s previous game, Grand Theft Auto V, was announced roughly a year after its initial release.

PlayerUnknown’s Battlegrounds dominated PC gaming talk in 2017, capturing a lot of attention and spawning many imitators. But while PUBG hit its absolute peak popularity on PC in January of 2018, its player base diminished drastically throughout the year.

The obvious reason is likely Fortnite, which dominated the talk of 2018 to a much larger and more unprecedented scale than PUBG ever did-it’s become a mainstream cultural phenomenon. But PUBG itself is also to blame. The game had numerous bugs, technical issues, matchmaking problems, and a general jankiness that never really went away.

PUBG’s raw, early-access feel was endearing at first. When the concept felt new and exciting, it was easier to overlook its problems. But the charm started to wear off through 2018, especially since its competition was a more polished alternative. PUBG developer Bluehole eventually acknowledged that the game had numerous issues, launched Fix PUBG, a development roadmap that let everyone know that it is listening, they are working on it, and they want to be transparent about it. But that hasn’t stopped its player base from shrinking.

On the plus side, if battle royale is your jam, the PC is the best place to get access to all the up-and-coming competitors trying to make waves with their own unique takes on the popular format. Fortnite and Call of Duty’s Blackout aside, PC players also have access to SCUM, Ring of Elysium, H1Z1, Battlerite Royale, Fear The Wolves, Fractured Lands, Realm Royale, Cuisine Royale, Darwin Project, Maelstrom, and Radical Heights (R.I.P.), to name a few. How many will make it in the end? Probably just one, really.

Strategy Is Still Strongest On PC

Sure, the major consoles have their exclusive titles. But there’s one genre that you absolutely need a PC to experience the best of: strategy and management games. Statistics, spreadsheets, intricate battle commands, economies, sewerage systems-these games keep you obsessing over the smallest decisions and keep you up all night.

2018 saw the release of some exceptional new strategy titles, like the phenomenal Into The Breach, the slow and deliberate Battletech, the perilously stressful Frostpunk and the frantic They Are BIllions. These games brought engaging new ideas to the already stalwart genre roster available on PC. We also got great new releases from familiar series-Thrones of Britannia represented a successful, smaller-scale experiment for the Total War series, Football Manager 2019 once again did its thing, and Two Point Hospital was a pitch-perfect spiritual successor to Bullfrog’s classic Theme Hospital.

The company behind Steam, Half-Life, and Dota 2 among other things released its first new game in years during 2018, the trading-card game Artifact, based on the Dota 2 universe. It was designed by the legendary creator Richard Garfield (the person responsible for Magic: The Gathering and Netrunner), but its release was surrounded by heated discussion over its unique monetization model. While the base game costs $20USD, the only way to get new cards is to either buy more 12-card packs at $2USD each, or purchase them individually from other users on the Steam marketplace. This model mimics the real-world collectible card game market, but i seemed to irk players who are used to the more generous free-to-play model of its competitors. However, Artifact’s defenders tout that the relative cost of achieving a full set of cards compared to other games is comparable, and in cases better given the ability to resell on the Steam marketplace.

In more positive and less contentious Valve news, the company this year acquired Campo Santo, the independent studio behind Firewatch and the upcoming In The Valley Of Gods, so expect to see another Valve published game in 2019.

Though Xbox began experimenting with early access games in 2017, the PC is still the best place to try out a large variety of the freshest new game ideas. Wading into the early access pool naturally has its own perils (we’re talking about unfinished games, after all), but there are always games whose concepts are so enticing and executed so well that they demand your attention even before they’re finished.

Significant early access darlings that gained popularity this year included the widely celebrated Dead Cells, which finally came out of early access in August, the deck-building roguelike Slay The Spire, space survival game Astroneer, the aforementioned RTS They Are Billions, Crytek’s competitive western game Hunt: Showdown, among many others.

Elsewhere, Star Citizen is still in development, seven years later. The ever-growing spiritual successor to Wing Commander reached over $200 million dollars in crowdsourced funding in November of this year, and its scope continues to be almost incomprehensible. The 2013 phenomenon DayZ also reached its fifth year of Early Access, though we’re not sure if anyone is still playing that.

On the indie front, Sony, Microsoft, and Nintendo have all been getting better in bringing indie games to their respective platforms, and other publishers like Devolver Digital are making sure their titles get released in as many places as possible. But, if you’re interested in the independent scene, the PC is still the place to be. Certain high-profile 2018 titles are PC only, like the exceptional Return To Obra Dinn, and others, like Into The Breach, released on PC long before getting announced for any other platform. Additionally, PC-exclusive services like Itch.io are still the best place to check out smaller-scale experimental titles.

New Technology Is Here. The Future Is Here.

2018 was the year that GPU manufacturer Nvidia took its next big step and revealed the Geforce RTX 20 series of graphics cards at Gamescom, which can very comfortably run modern games at their highest detail levels in 4K resolutions and at 60fps. But even though the raw jump in performance might not seem that drastic on paper, and the cards themselves are expensive, the 20 series pushes GPU tech forward with the introduction of a couple of notable technologies that look to the future of graphics rendering.

The 20 series boasted a major advancement in the form of real-time ray tracing, essentially a superior and realistic-looking way to render lighting, shadows, and reflections, though only a limited number of games are currently able to actually utilize this technology (Battlefield V is the only one at the time of writing). The 20 series also uses a new form of antialiasing, called Deep Learning Super-Sampling (DLSS), which uses a form of artificial intelligence to perform better polygon rendering without the huge computational strain that it typically requires.

Elsewhere, Google unveiled a limited test of its cloud streaming service, Project Stream in October. The company teamed up with Ubisoft to let a selection of users play Assassin’s Creed Odyssey through the service, which streams game through the Google Chrome browser, and by GameSpot’s own accounts, this actually runs pretty damn well.

With rumors of new consoles on the horizon, these two disparate advancements in both local and remote computational technology give us some good ideas of what to expect. We know a number of major games companies are looking towards cloud streaming as an option (if they don’t already have an active service), and we know that there’s always been a bit of a hardware arms race between Sony and Microsoft concerning who gets to boast about having the better graphical quality. So, to see functioning examples of both kinds of advanced technologies this year on PC feels like we’re already getting a taste of the next few years of gaming.

It’s unsurprising that the versatility and open nature of the Windows PC platform continues to make it the best place to play a large variety of games. Third party publishers are continuing to support their PC audiences, and it’s the platform with the biggest variety of independent and early access games. Big console exclusives from Sony and Nintendo will continue the elude PC audiences, but Microsoft’s Play Anywhere initiative continues to be a positive idea that will hopefully pay off with their recent studio acquisitions. Additionally, the PC still sees its fair share of platform exclusive games, especially in the strategy genre.