Update 2: Fortnite’s 7.10 update will be arriving a little later than originally planned. Epic Games announced that it has delayed the rollout of this week’s patch «due to last minute issues discovered within the build.» It’s unclear if the update is still slated to arrive on December 18, but Epic says it will provide further details on the timing of the update once it has more information. 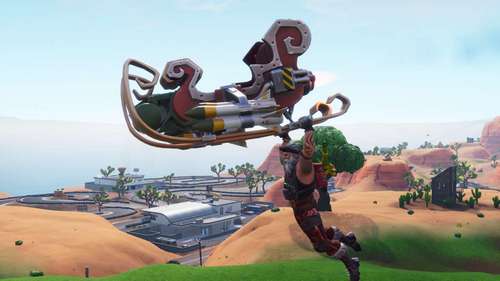 Update: Epic has delayed Fortnite’s new Driftboard vehicle. While the developer had teased that the snowboard would arrive in the game this week, it has now announced it is postponing the vehicle in order to make further quality-of-life improvements to it.

«We know we set the expectation for the Driftboard to release in the coming update,» Epic wrote on Reddit. «Unfortunately, we’ve decided to hold the release of this new vehicle to make some final quality of life changes and other polish improvements.

«We want to get you out there carving up the slopes as soon as possible. However, our goal is to make sure that your experiences on the Driftboard are up to our expectations. We still have tons of quality of life and balance improvements on the way in v7.10.»

Like clockwork, a new update is on the way for Fortnite. Developer Epic Games confirmed that this week’s 7.10 patch will roll out for all platforms-PS4, Xbox One, PC, Nintendo Switch, and mobile devices-tomorrow, December 18, and it looks like it’s set to introduce the recently teased snowboard to the title.

According to the official Fortnite Twitter account, the 7.10 update is scheduled to go live at 2 AM PT / 5 AM ET / 10 AM GMT. Among other things, it’ll likely add the Driftboard, a brand-new type of vehicle. As its name implies, the Driftboard is a high-tech snowboard; it holds a single player and allows the rider to boost around the map.

Epic hasn’t detailed what else will arrive with the 7.10 update, but it will presumably also mark the start of a new limited-time mode. Until then, players still have a little more time to jump into the game’s current LTM, Team Rumble, which pits two teams against each other in a race to get 100 eliminations.

This will mark the third update Fortnite has received since the start of Season 7 earlier this month. Last week’s update, v7.01, introduced a new Mythic weapon to the game: the Infinity Blade. Much like Thanos’s Infinity Gauntlet, the Infinity Blade grants its wielder an immense power boost. However, the sword was improperly balanced, and as a result, Epic has vaulted it.

«We messed up and rolled out the Infinity Blade overpowered / without good counters, especially in the end game,» Epic said when it announced its decision to remove the sword. «The Infinity Blade has been Vaulted and we are re-evaluating our approach to Mythic items. Thanks for calling us out on this!»

Meanwhile, the next set of Fortnite’s weekly challenges is slated to arrive later this week, on December 20. If you need help completing any of the current challenges, you can find tips in our Season 7 challenges roundup. Clearing these will level your Battle Pass up and unlock the new Season 7 skins and rewards.