The Super Smash Bros. series has always excelled in a party setting thanks to its frenetic action and easy-to-learn mechanics, but the franchise has generally struggled to offer an equally compelling single-player experience. While each installment has featured a variety of modes tailored to solo players-the most robust being Super Smash Bros. Brawl’s Subspace Emissary, a full-fledge crossover adventure-none of these have had the same lasting appeal as its standard Smash mode. The series’ latest entry, Super Smash Bros. Ultimate for Switch, introduces a few new single-player options of its own in the form of the Spirit Board and World of Light mode, and from what we’ve seen of them thus far, they look to be just what the series needed to elevate its solo experience.

We had the opportunity to try both of the new solo modes during a recent hands-on demo of Super Smash Bros. Ultimate. Much like Subspace Emissary, World of Light is an expansive single-player adventure that unites the game’s motley cast against a powerful, supernatural entity known as Galeem. As we saw during the final Super Smash Bros. Ultimate Direct, the story begins when Galeem unleashes a barrage of light that reduces every character on the roster-with the exception of Kirby-to Spirits, beings who have lost their corporeal form. As the sole survivor of the onslaught, it falls to the intrepid puffball to rescue the other fighters and put a stop to Galeem’s machinations.

Despite its initial similarities to Subspace Emissary, World of Light differs from it in some notable ways. While the campaign does feature some cutscenes, Nintendo says it isn’t quite as story driven as Brawl’s adventure mode. Instead, World of Light compensates for its lighter narrative with a sprawling world map, which features branching pathways and dozens of battles to take part in. As you work your way through these bouts, you’ll gradually rescue other characters, who you’ll then be able to freely switch between as you head toward the final confrontation with Galeem.

Each opponent you face off against in World of Light comes equipped with Spirits, collectible characters drawn from an array of different video games. Much like the different pieces of equipment you could acquire in Super Smash Bros. for Wii U and 3DS, Spirits are used to augment your fighter’s stats and abilities. They come in two varieties. The first, Primary Spirits, confer a stat boost to your character. Depending on their class level, they also typically boast one to three slots that can be outfitted with Support Spirits, which further imbue your fighter with different abilities and attributes. For instance, equipping Fire Emblem Awakening’s Lon’qu as a Support Spirit will give your character a Killing Edge sword at the start of a match, while the Wind Fish from The Legend of Zelda: Link’s Awakening increases the power of your special moves.

Furthermore, Primary Spirits fall under one of three different categories: Attack, Grab, or Shield. Much like the elemental types in Pokemon, these coexist in a rock-paper-scissors-style triangle, each one offering an advantage over another. As a result, the battles in World of Light introduce a new layer of strategy to the series, as you’ll need to carefully consider which Spirits to equip to your fighter in order to counteract the different battle conditions imposed by your opponent’s Spirits. Defeating foes will in turn reward you with their Spirits and other in-game currency, which you’ll then be able to use to level them up and even unlock additional attributes for your fighters on a skill tree. 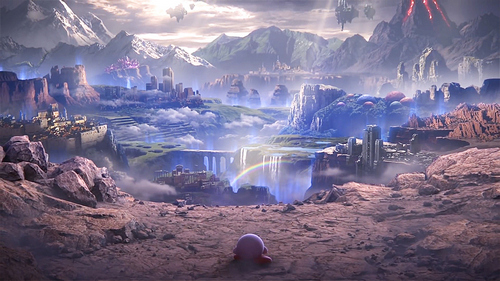 Complementing World of Light is the aforementioned Spirit Board, another mode in which you can unlock the titular collectibles. True to its name, the Spirit Board is laid out much like a quest board; you’ll be able to select the picture of a Spirit you’d like to challenge and compete against an appropriately themed character who is equipped with it, just as you would in World of Light (albeit without the adventure game trappings found in that mode). The difficulty of these bouts is determined by the rarity of the Spirit you are facing, and they can get surprisingly challenging if you’re battling an Ace or Legendary Spirit. Fortunately, even if you don’t succeed the first time around, you’ll be able to challenge the Spirit again after a set amount of time.

Thanks to the introduction of Spirits, Super Smash Bros. Ultimate’s new single-player modes are shaping up to be the deepest in the series yet. The game launches for Nintendo Switch on December 7. On top of the new modes, it boasts the largest roster in the franchise to date, with 11 new characters set to debut in the game (plus five as-yet-unannounced fighters slated to arrive throughout 2019 as DLC). You can take a look at some of the new fighters in action here. For even more on the title, check out our roundup of everything we know about Super Smash Bros. Ultimate.