Ancestors: The Humankind Odyssey is the next game from Assassin’s Creed creator Patrice Desilets. The ambitious concept-playing as hominids through different periods of ancestral time-caught my attention right away, and after seeing it in action for the first time at The Game Awards, I’m even more intrigued. A single-player, third-person exploration survival game, your journey in Ancestors begins as a hominid in Neogene Africa some 10 million years ago.

Over time, you grow and literally evolve to the Australopithecus popularly known as Lucy. On your way to becoming Lucy, you’ll learn new skills and abilities as you take the form of the next subspecies of hominid that would eventually become the human form of today. It is quite an ambitious concept to say the least. 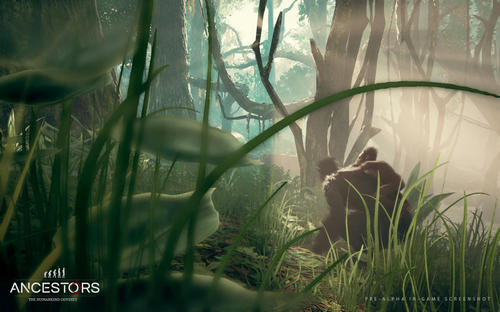 Based on early footage, you’ll be clambering through the jungle and swinging through trees, escaping predators, gathering resources, and essentially trying to survive and live another day. It looks like no other game I’ve played before, and the novelty and ambition of the concept has me eager to see and learn more.

It’s too soon to say how it all works out in practice, but it’s exciting to think about where the chapters after that will go in the future. I can imagine playing as other hominid species such as Homo Erectus and Homo Neanderthalensis, among others.

Another interesting element of Ancestors: The Humankind Odyssey is how it will be released. Like the Life Is Strange series, the title is episodic in nature. Volume 1: Before Us is due out in 2019, and it takes place in Africa 10 million years ago and spanning up until 1 million years ago. Future instalments will focus on different periods of human evolution.

Ancestors: The Humankind Odyssey is the first game from Desilets’ studio, Panache Digital Games in Montreal, which was formed back in 2014 after Desilet’s rocky breakup with Ubisoft.

The game’s first chapter is set to launch sometime in 2019, though there is no word on when the subsequent releases will follow. Ancestors: The Humankind Odyssey will be published by Grand Theft Auto and Red Dead Redemption parent company Take-Two Interactive’s independent games label, Private Division. It is coming to PC, Xbox One, and PlayStation 4, and right now is planned as a digital-only release.