Ever since its reveal back at E3 2018, Devil May Cry 5 has continually impressed me with every new trailer and detail we learn about it. Sure, it’s sticking close to the classic formula of battling legions of demons with gloriously over the top and somewhat impractical weapons, but Capcom’s action game series has always been in a class of its own when it comes to high-flying, stylish combat. This all works thanks to its likeable cast of characters, including lead protagonist Dante and his familiar devil-may-care attitude that’s just too fun to roll your eyes at. That sort of confidence in its identity, even after all these years, is something I’ve always loved about the series, and Devil May Cry 5 certainly aims to make up for lost time by offering the most refined and visually stunning outing yet.

Of course, fans who’ve been keeping up with the series will no doubt notice the obvious elephant in the room when looking at this game. Ninja Theory’s 2013 reboot, DmC: Devil May Cry, was a valiant effort that offered an interesting twist on the DMC mythos, but Capcom decided that there’s still more to be said with the original series. Though DmC is among my personal favorites-and I wish more players would give it a fair shake-there is something rather special about seeing classic Devil May Cry back in action, especially when many of the trailers and playables demo show that it hasn’t missed a beat since its hiatus. 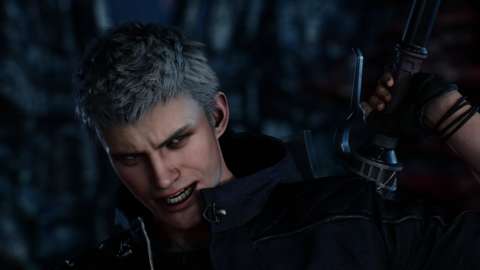 With three playable characters in Devil May Cry 5-Dante, Nero, and newcomer V-and a larger campaign that can bring them all together for co-op gameplay, the next game will be upping the ante in a more extravagant way. It’s also especially satisfying to see that DMC5 has taken several cues from the stylish and modern flair that Ninja Theory brought to the series. This is most apparent with the return of dynamic battle themes that ramp up based on performance topped off with the slick slow-mo finishes to the end of an intense clash.

One of the things I’ve been really enjoying from our early looks at Devil May Cry 5 is that it seems to be keenly aware of its place in the series. Directly referencing the original games, the anime and manga, and even acknowledging the black sheep Devil May Cry 2 in some form-the next entry is aiming to be the title that brings many of the events and characters from past games full-circle. It all seems fitting for Capcom’s next stylish-action game to look back on its lineage as a whole, as it plans to finish the main story of the Sparda saga. Whether it’ll close things proper, or if it’ll lead into the next phase of the series remains to be seen, but Devil May Cry 5 will no doubt revel in the time it has-and it’ll definitely look good while doing it.

If you’re in need of a refresher with what’s new in DMC5, check out our feature on everything we know about the game so far.