Call of Duty: Black Ops 4 developer Treyarch has rolled out Holiday events and promotions across the game. These include a seasonal makeover for Blackout, the game’s battle royale mode, which has had environments spruced up with lighting and decorations. There’s also snowballs in the game now and Supply Stashes are holiday themed too. 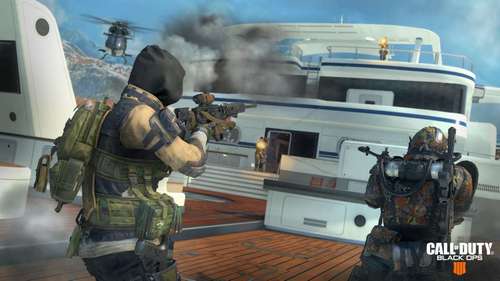 Blackout players also have a new limited-time mode to check out called Close Quarters Frenzy. «Fight to outlast a faster Collapse using close-quarters weapons-shotguns, SMGs, pistols, and melee are your only means of survival,» Treyarch said, describing the mode.

In the Black Market, meanwhile, there’s a large selection of new themed items to unlock. Since Activision has a timed exclusivity deal for Black Ops 4 with Sony, these items are currently only available on PS4, but will arrive on Xbox One and PC on December 20. In Zombies, meanwhile, there’s the Winter Calling event, which gives players a unique set of challenges to complete, in exchange for special unlocks.

Players on PS4, Xbox One, and PC will also get double experience points in multiplayer and Zombies, starting December 14 at 10 AM PT / 1 PM EST / 6 PM GMT / 5 AM December 15 AEDT, and lasting throughout the weekend. If you’re playing Blackout during this period you’ll get double merits.

Treyarch has also detailed various changes it has made to all versions of the game in the latest Black Ops 4 update. The patch notes are fairly lengthy, containing information on how its addressed various exploits, improved stability in multiplayer, mixed up playlists, and tweaked Operators. You can see the full patch notes here.

Black Ops 4 takes some big departures from the traditional Call of Duty formula. Not only did it drop the single-player campaign in favour of a more robust multiplayer offering, but it also introduced the new Blackout mode in response to the popularity of the battle royale genre. In her review, Kallie Plagge gave Black Ops 4 an 8/10.

«Black Ops 4 isn’t short on content, and its three main modes are substantial,» she said. «Multiplayer introduces more tactical mechanics without forcing you into them, and it largely strikes a good balance. Zombies has multiple deep, secret-filled maps to explore, though its returning characters don’t hold up and prove distracting. Finally, Blackout pushes Call of Duty in an entirely new direction, making use of aspects from both multiplayer and Zombies for a take on the battle royale genre that stands on its own. Sure, there isn’t a traditional single-player campaign, but with the depth and breadth of what is there, Black Ops 4 doesn’t need it.» Read GameSpot’s full Call of Duty: Black Ops 4 review for a deeper analysis of the game.